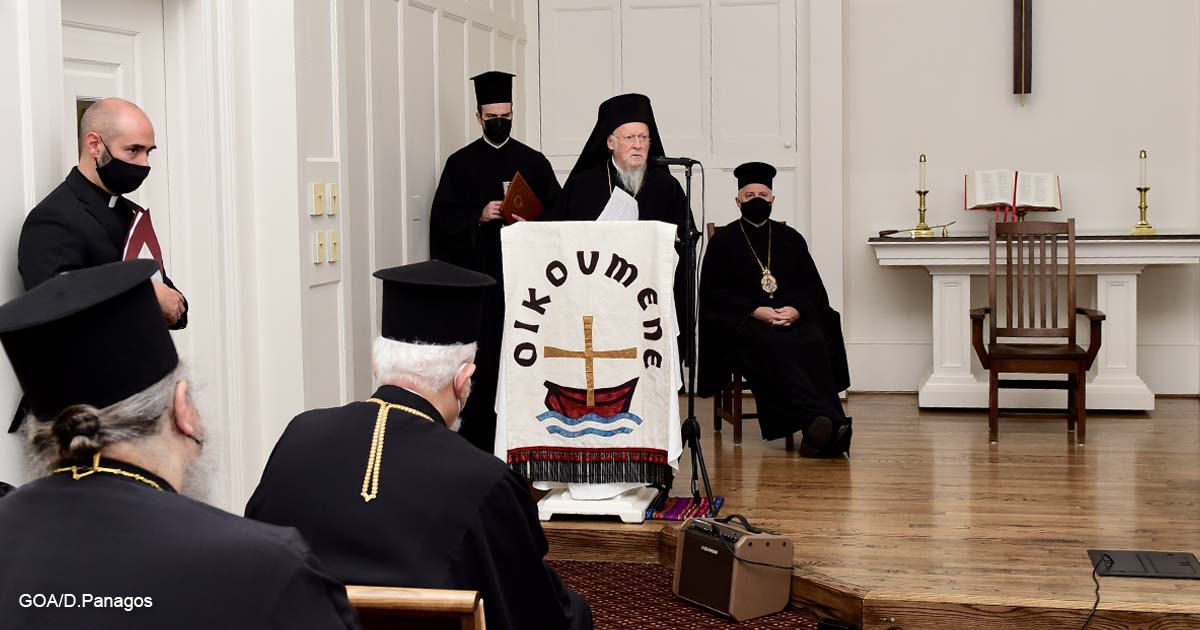 “The Future of the Ecumenical Movement”

Your Eminences,
Your Excellences and Graces,
Distinguished Ecumenical Leaders,
Ladies and Gentlemen,
Dear Brothers and Sisters in Christ,

We cordially thank you for welcoming us today and sharing the ecumenical joy of coming together as Christians from various Churches. We would like to express our deepest gratitude to Mr. Jim Winkler, President and General Secretary of the National Council of Churches and Bishop Jefferson-Snorton, Chair of NCC Governing Board, as well as to His Excellency David Talley, Bishop of Memphis and chair of the Committee on Ecumenical and Interreligious Affairs at the US Conference of Catholic Bishops, and finally to the Reverend Susan Henry Crowe, our host today in this magnificent United Methodist Building, for their words of welcome and true Christian hospitality.

Since the beginning of September, we have traveled extensively from Hungary to Italy, from the United Arab Emirates to the Vatican and now to the United States of America. It is our conviction that ecumenical dialogue is first and foremost a witness to our Christian faith and to the unity of Christ’s Body that is inherent to the teaching of the Gospel. Christ’s call to unity is clearly directed to us:

“I ask not only on behalf of these, but also on behalf of those who will believe in Me through their word, that they may all be one. As you, Father, are in Me and I am in You, may they also be in Us, so that the world may believe that You have sent Me.” (John 17:20-21)

Since the late 19th century, when the quest for unity became a vital part of the Church’s mission in the world, the Orthodox Church has always prioritized the rapprochement among Christians as a response to Christ’s commandment. No other Encyclical of the Ecumenical Patriarchate exemplifies the Orthodox commitment to the ecumenical movement like the Encyclical “Unto the Churches of Christ Everywhere,” issued in 1920, in the aftermath of the First World War.

Following World War II, the need for a global Christian organization was brought to fruition with the World Council of Churches, based on two crucial principals: an actual dialogue on theological issues and the need for joint social action.

Today, the ecumenical movement is at a crossroads. If we do not place the issue of unity and communion at the center of our commitment, we will lose the authenticity of our relationships and the common goal that brings us together. We have excellent and very talented theologians working on various aspects of our doctrine. But how can we reinvent our commitment to the “dialogue of love?” As you may know, this expression was originally used to describe the first encounter between Pope Paul VI and Ecumenical Patriarch Athenagoras, in Jerusalem, in 1964. The dialogue of love needs symbols, actions and encounters that embody our desire for unity.

Allow us to offer one example of the kind of ecumenical milestone to which we are committed regarding an issue dear to our heart: the protection of the environment. On September 7, 2021, together with His Holiness Pope Francis and His Grace Archbishop Justin Welby of Canterbury, we, for the first time in the history of Christianity, issued an urgent appeal for the future of the planet. A few weeks later, we were once again together in Italy to discuss the environment in preparation for the COP26. Our common care for the natural environment has become a tangible opportunity to explore the mystery of unity.

The determination of the Ecumenical Patriarchate with the ecological crisis is grounded in the principle that we cannot have two ways of looking at the world: one, religious and another one, worldly. We cannot separate our concerns for human dignity, human rights, or social justice from our concerns for ecological preservation and sustainability. These concerns are closely linked. If we value each individual made in the image of God, and if we value every particle of God’s creation, then we must also care for each other and our world. In religious terms, the way we relate to nature directly reflects the way we relate to God and to our fellow human beings, as well as the way we relate to the whole of creation in all its biodiversity and beauty.

That is why our venerable predecessor, the late Ecumenical Patriarch Demetrios sent, on September 1st, 1989, the very first Encyclical to all Orthodox Churches throughout the world, instituting the first day of the ecclesiastical year as the Day of Prayer for the Protection of Creation.

We have repeatedly stated that the crisis we are facing today is not primarily ecological. It is a crisis in the way we perceive and conceive of the world. We treat our planet in a sacrilegious way, precisely because we fail to see it as a gift from above; because we fail to recognize our obligation to respect and pass this gift on to future generations. Therefore, before we can effectively deal with problems of our environment, we, as Christian ministers, must change the way we see the world and society. Otherwise, we are simply dealing with symptoms and not their causes. We require a new worldview if we are to desire what the Book of Revelation calls “a new earth.” (Rev. 21.1)

This is only one example among many others. We are aware of the colossal initiatives the National Council of Churches has undertaken, especially in tackling racial injustice. If we consider the protection of the natural environment based on the theological acknowledgment of God’s presence, how much more should we defend the dignity of any human being based on the sacredness of God’s image imprinted in every person?

The future of the ecumenical movement resides in “the dialogue of love” through the creation of new symbols and common actions. We need to open our hearts to the language of dialogue. This is the ultimate condition for the restoration of unity among Christians. The 20th century was a time for growing restoration of relationships. The 21st century should become the century of the restoration of unity. The path to Christian unity has been neither peaceful nor painless. Unity is a task that remains difficult to fulfill. But the bonds of friendship among divided churches and the bridges by which we can overcome our divisions are indispensable, now more than ever. Love is essential, so that dialogue between our churches can occur in all freedom and trust. Then, we will acknowledge that the divergences originating from different ways in which churches respond to moral problems are not necessarily insurmountable, since churches witness to the gospel in different contexts. We should also recognize dialogue as an ethos by which churches can be prepared to compare and confront their divergences honestly, examining them in light of doctrine, worship, holy Scripture, but also pastoral care. Let us, therefore, process with hope along the path toward our restored unity.

Thank you for your kind attention.