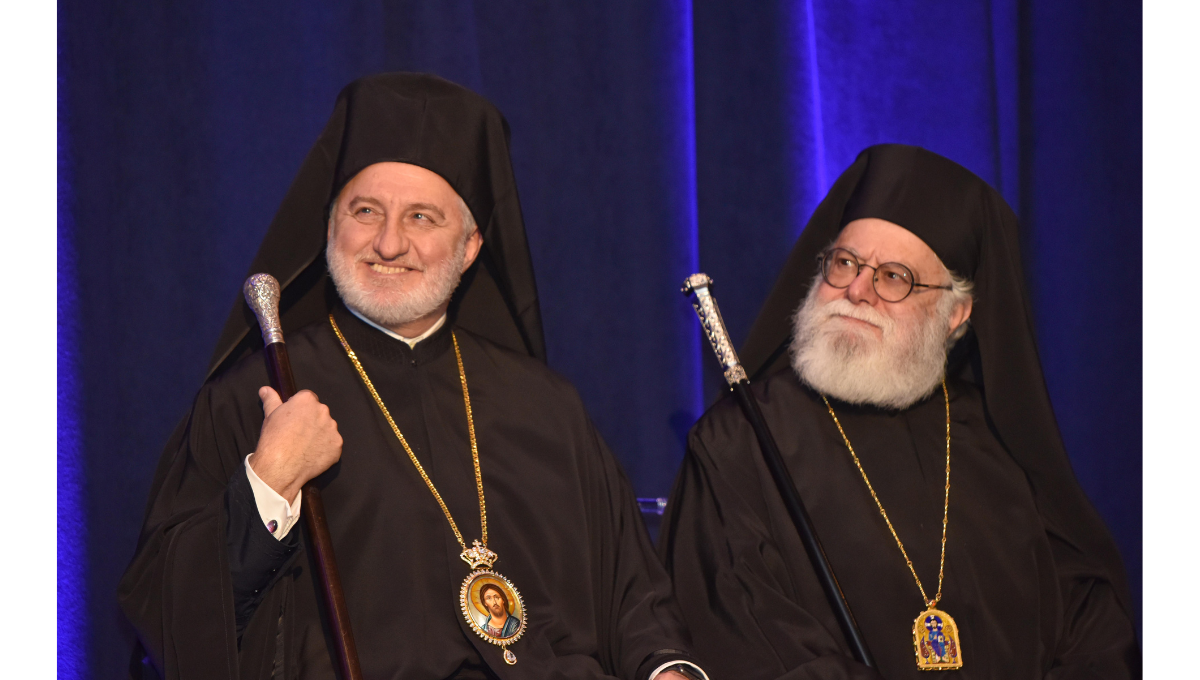 Remarks at the Centennial Banquet of the

Beloved Sisterhood of the Philoptochos, and Parish Organization Heads,

Beloved Sisters and Brothers in Christ:

What a joy it is for me to be with you all here in Warren, as you celebrate the centennial observance of your parish. As you all know, this Community predates the Archdiocese itself by a few years. Organized by the local Diaspora community, you received your first priest before the Archdiocese became the premier Eparchy of the Ecumenical Throne in 1922. Therefore, your centenary has a very special meaning.

Here in Warren, your history is an icon, an image of the Greek-American and Greek Orthodox experience that was repeated over and over again across the United States. Greeks came to this country seeking a better life, and often came from war torn regions in Asia Minor, in addition to the various islands and regions of mainland Greece.

I must tell you that I have been at many Centenary Celebrations of our communities this past year spanning our great country: from Seattle to Philadelphia. One hundred years ago, our spiritual forebears and many of our own blood ancestors came to America in numbers that we have never seen since. They planted the Greek Orthodox Faith in America like a vine, to bring forth a tremendous yield of spiritual fruit. Here in Warren, it is no different.

You can all be proud that a Greek Orthodox Primate of America, the former Archbishop Spyridon, was born right here in Warren on September 24, 1944. His Eminence joined me and my immediate predecessor, former Archbishop Demetrios, at the Centennial Clergy Laity Congress this past July in New York City. They were both in attendance at the Consecration of the Saint Nicholas National Shrine at the site of the rebuilt World Trade Center. And allow me to add that a son of this Paris, your very own John Payiavlas, one of the great lay leaders and benefactors of the entire Church, is an officer of the non-profit, The Friends of Saint Nicholas, that successfully resurrected the little House of God that was destroyed on 9/11. Here in Warren, Ohio – much of the history of the Church of America has been written, and you will write much more in your next hundred years!

Just three days ago, we celebrated your Heavenly Patron, the Great-Martyr and Myrrh-streamer, Demetrios. His name came to this Parish because many of your earliest forefathers and foremothers were from Northern Greece, and the Πολιούχος of Thessaloniki was revered by all.

Your One Hundredth Anniversary is a sign that this parish is founded upon the firm and unmovable foundation of the Apostles, and the Lord Jesus Christ is your Chief Cornerstone.[*] Saint Demetrios is that champion who exemplifies your faithfulness to the Church, for he gave his life rather than give up his faith. And during his own “holy week,” Saint Demetrios emboldened all those around him to confess their faith in the Lord Jesus Christ, just as he sent the young Nestor into the arena to defeat the giant Lyaeus, a new David slaying a different Goliath.

Through the decades, the Warren Omogeneia has demonstrated time and time again that ministry and service are at the core of this community. That is why you were able to overcome the Royalist/Venizelist fracture of the 1920s. That is why you were able to support Greek War Relief during and after World War Two. And that is why you came together to build a magnificent Church edifice, and bring about all the programs and ministries that are the hallmark of Greek Orthodox communities from coast to coast.

Now, the second hundred years are before us all. I took notice of the logo of your Centennial Celebration:

“Honoring our History – Envisioning our Future.”

The two sides to this gold coin of intention are of supreme importance for your steady progress in Christ. To honor your history, you must indeed know it. That is why the names, dates, and places where Saint Demetrios has unfolded in God’s presence and plan are so important.

But, we must never rest on our laurels. The achievements of the past find their true meaning in their impact on subsequent generations. We never can allow our Churches and communities to become relics of a once glorious past. Especially here in America, and here in Warren.

As you know, I was born in Constantinople, the Queen of Cities, and I served there for over a quarter of a century. I have seen relics of our faith strewn throughout Asia Minor. But this was not a willing diminishment of the Christian Faith and Presence. It was the result of great historical and political movements that happened over a millennium.

But we live in a free and relatively new country. We have opportunities and liberties that our ancestors never experienced or enjoyed. In fact, that is precisely why so many of them came to America in the first place! As we celebrate the past this evening, let us never forget that our vision of the future will shape what that future will be for the generations yet to be born.

The responsibility is great. The opportunity … even greater!

Therefore, in congratulating all of you this evening, I also encourage you to press forward, as the Apostle Paul says:

… ever reaching forward, press on toward the goal for the prize of the high calling of God in Christ Jesus.[†]

Your Centennial reminds us all that the Greek Orthodox Diaspora had and still has a profound commitment to its Faith, the two thousand year old spiritual tradition that came with the early immigrant across the ocean, in order to find new soil in which to grow. Your physical and spiritual forebears were apostles for later generations. They were true missionaries, intentional or not, and they planted seeds of our Holy Orthodox Faith throughout the United States, and right here in Warren, Ohio.

I extend to each and every one of you my heartfelt congratulations and best wishes for this historic milestone.

May the Lord always bless you, through the intercessions of the Holy Great-Martyr and Myrrh-Streamer Demetrios.

Thank you, and again, congratulations to all.