NEW YORK – His Eminence Archbishop Demetrios of America met with the Prime Minister of Greece Alexis Tsipras, Oct. 1, 2015, at the headquarters of the Greek Orthodox Archdiocese of America.

Archbishop Demetrios welcomed the Prime Minister at the entrance and together they entered the chapel of the Archdiocese, where His Eminence showed to Mr. Tsipras the few items that survived the destruction of St. Nicholas Church during the terrorist attacks of September 11. 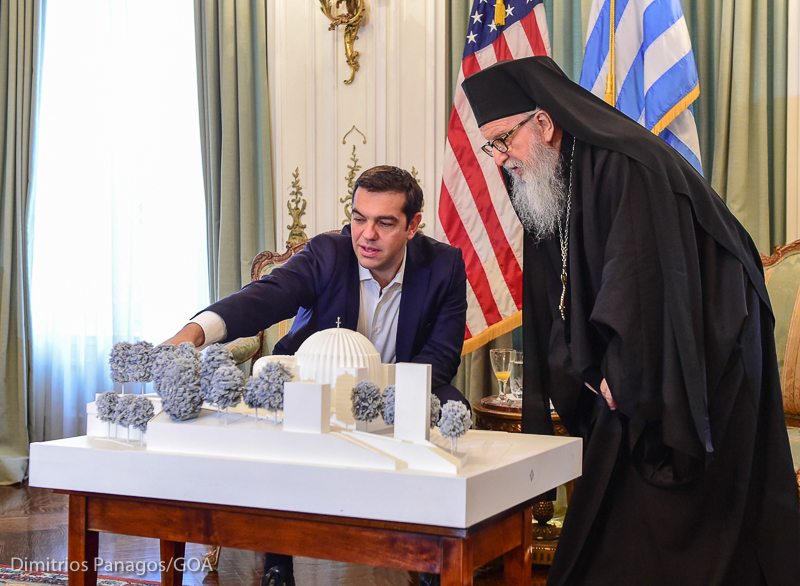 In a very warm and cordial meeting the Archbishop presented to the Greek prime minister an outline on the life, the progress and the vitality of the Greek Orthodox Archdiocese of America and the Greek American community in the United States. The discussion included the rebuilding of Saint Nicholas Greek Orthodox Church and National Shrine at the World Trade Center, which is now underway. The discussion between the two leaders also focused on intensifying the efforts of the Omogeneia in support of the motherland in all levels, especially as Greece tries to grow its economy through investments and development.

Prime Minister Tsipras thanked the Archbishop for the substantial assistance and philanthropic support of the Greek Orthodox Archdiocese of America to Greece during the crisis. Mr. Tsipras mentioned the example of the Center for Children “Dimitreio” in Moshato (Athens), which he had visited with Archbishop Ieronymos of Athens and All Greece, and is named for Archbishop Demetrios. He said that this center is an example of solidarity and benevolence for children in need. He further said that this work of standing with and helping the fellow human being is invaluable and important work and is a goal towards which the efforts of both the Church and the State should converge, so no one will have to face tough times alone.

Mr. Tsipras said he was “very pleased” that the rebuilding of the St. Nicholas Church has began and that St. Nicholas will be a better church edifice than before as it is designed by prominent architect Santiago Calatrava. The prime minister also said that Saint Nicholas is being built in a location that is a very important hub, where thousands of people passing by every day will partake of the important presence of Greece and Orthodoxy in the World Trade Center, a very central point for the whole world.

Accompanying Prime Minister Tsipras in the visit were the Deputy Minister and government spokeswoman Olga Gerovasili, the Ambassador of Greece in the United States Christos Panagopoulos; the Consul General of Greece in New York Ambassador George Iliopoulos; the Director of the Prime Minister’s diplomatic office Vangelis Kalpadakis and the Consul of Greece in New York Emmanuel Koumbarakis. In attendance from the Archdiocese were His Grace Bishop Andonios of Phasiane, chancellor of the Archdiocese, His Grace Bishop Sevastianos of Zela, chief secretary of the Holy Eparchial Synod and Fr. Alexander Karloutsos, assistant to the Archbishop for public affairs. 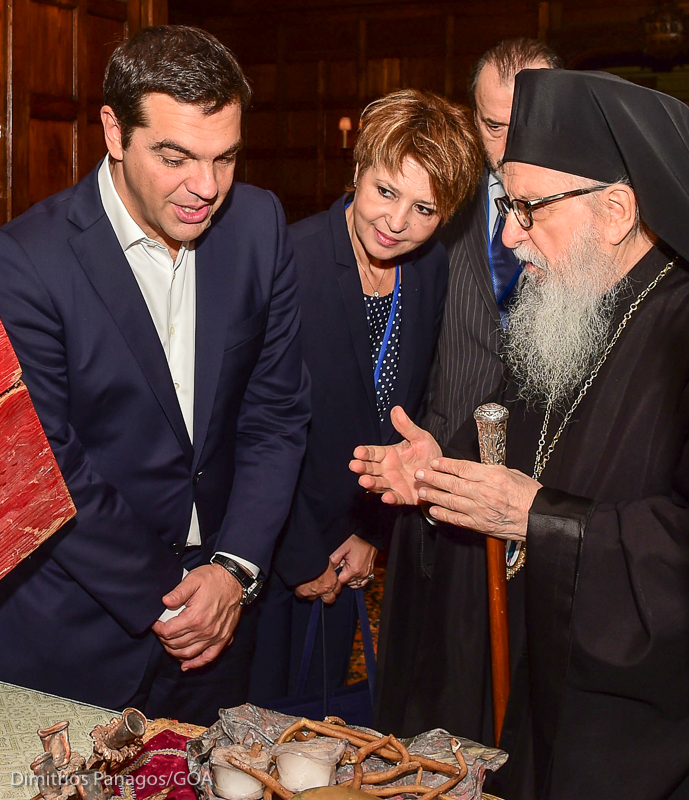