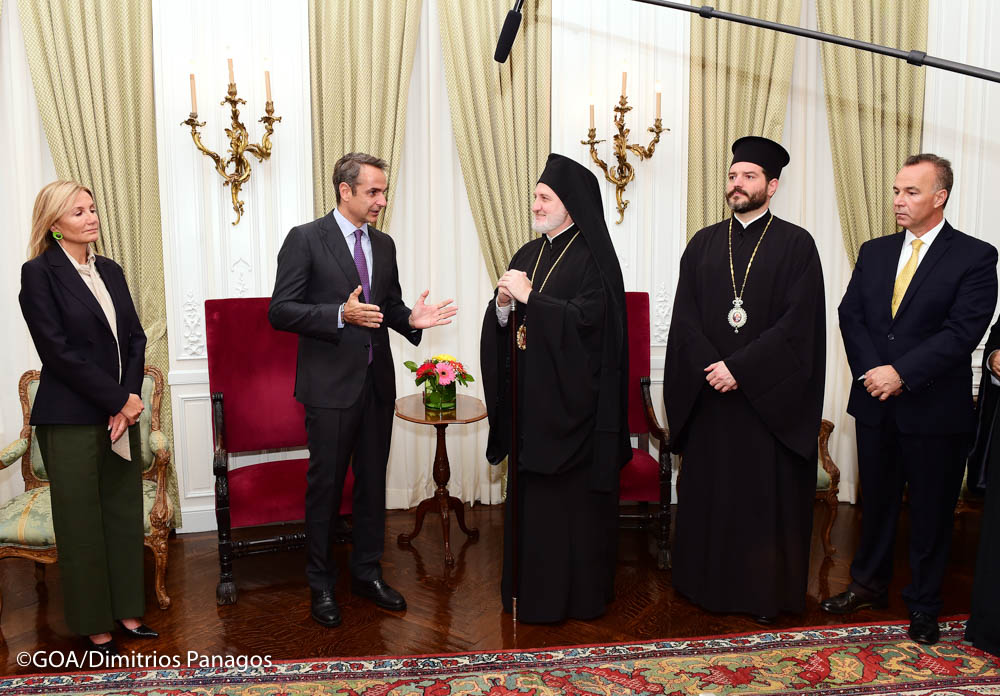 NEW YORK – His Eminence Archbishop Elpidophoros today joyously welcomed the Prime Minister of Greece Kyriakos Mitsotakis to the headquarters of the Greek Orthodox Archdiocese of America. Prime Minister Mitsotakis is in New York for the United Nations General Assembly.

Archbishop Elpidophoros, in his remarks, expressed his love, excitement and special appreciation for the meeting. He stated that after the ten-year period of austerity in Greece, during which the Greek people suffered, the new Prime Minister will assuredly govern in a spirit of love, unity, compassion, brotherhood, philanthropy and understanding.  The Archbishop closed his remarks by stating that he is looking forward to a harmonious cooperation in all areas, strengthening and upholding the already strong bonds between the people of Greece and the faithful of the Greek Orthodox Church in America.

Responding, Prime Minister Mitsotakis noted that the year of 2019 is momentous for both of them, as the Archbishop will give new impetus to the Archdiocese of America and Mr. Mitsotakis begins the task entrusted to him by the Greek people to lead the country out of crisis.  He spoke of the important concept of unity, which is a precondition for Hellenism to be able to look to the future with optimism, and to be able to grow as it has done so many times in its history.  He said that this affects not only Greek living in their motherland but also concerns people of Greek decent and their unity with their motherland, ensuring that the ties remain meaningful, with quality and function.

In closing his remarks, the Prime Minister said that he has high expectations for the work that can be done in America.  The Archbishop’s name, Elpidophoros, means messenger of hope, and through his work we are given the power and the mental and spiritual resources to move through our difficult path with confidence, knowledge of our history, and with respect to our church and our traditions, always keeping with us what makes us separate as a nation and not resting on the laurels of the past.

Others in attendance were the Prime Minister’s wife Mareva, son Konstantinos, Deputy Minister of Foreign Affairs for Greeks Abroad Antonis Diamataris, Bishop Apostolos of Medeia, Fr. Vassilios Drossos and clergy and staff of the Archdiocese.