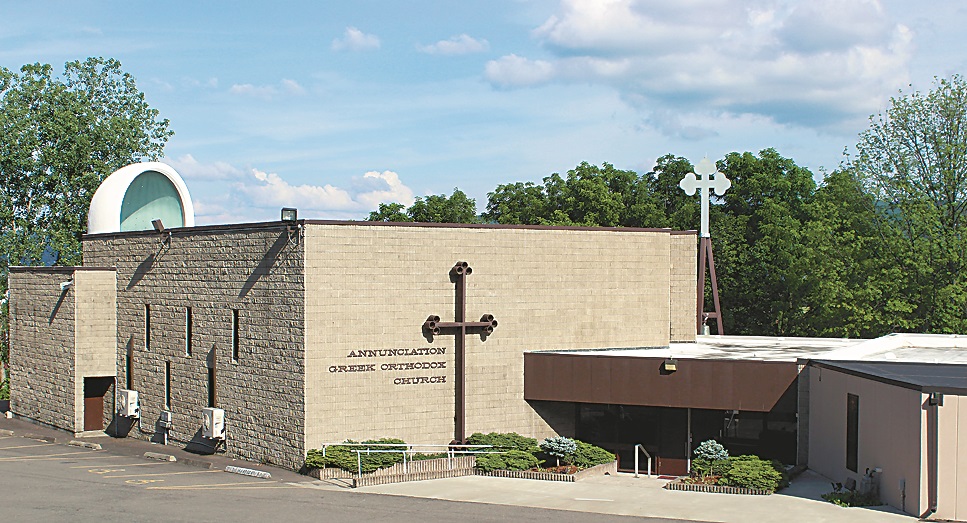 BINGHAMTON, N.Y. – Along the New York-Pennsylvania border, lies the string of counties known as the “Southern Tier.” Binghamton (population about 48,000) and its nearby suburb of Vestal (population about 28,000), along with Endicott, were at the center of a major manufacturing center beginning in the late 1800s and continuing until the 1970s, which attracted the first Greek immigrants. Most came from the Sparta area and other parts of the Peloponnese.

The key industry for most of the first half of the 20th century where a majority of them worked was the Endicott-Johnson Shoe Company. At its height in the 1940s, it manufactured 52 million pairs a year.

IBM was another major firm that got its start in Binghamton in the early 1900s.

In the early years, the faithful worshipped at Sts. Peter and Paul Russian Orthodox Church in Endicott. A Syrian Orthodox priest from Scranton, Pa., also would serve the small community.

According to a parish history, three Greek Orthodox men living in Endicott in 1916-17, John Trihoulis (or Trehounis), Andrew Anastasopoulos (Anastos) and Angelos Romas began efforts to organize a Greek Orthodox church. Trihoulis was killed in WWI, but the two others continued after the war and with other Greek Orthodox who had moved to the area, built Annunciation Church in 1921. Holy Trinity Church was established in 1935. The two communities at one time had planned to merge, but the effort did not materialize, and Annunciation in Endicott moved to larger facilities in 1974, where it is situated today. The communities are about 600 miles east of Detroit and are the southeastern-most parishes of the metropolis.

About 20 priests served Annunciation Church over the years, including Fr. Athanasios Demos in the mid-1970s who continues to serve the Archdiocese as a parish priest in Manhattan. The longest-serving priest has been Fr. Michael Michalopulos (1981-2002).

In the 1960’s and 1970’s Orthodox Christians of Lebanese and other Middle Eastern descent began to join the parish community. By the late 1980’s and 1990’s, church membership included Orthodox Christians from other areas of Eastern Europe, as well as a number of converts.

Then, in 2008, Metropolitan Nicholas assigned Fr. Michael Bahlatzis to serve the two churches.

By then, they had fewer members than they did 50 years ago.

A native of Brooklyn, N.Y., Fr. Bahlatzis served in the U.S. Air Force.

He was deacon for 21 years at Holy Trinity Cathedral in Salt Lake City, Utah, where he joined the Air Force Reserves and served for 17 years with the Air National Guard in Syracuse, N.Y. He was a deacon for 10 years at St. Catherine Church in Ithaca.

Presently, he is chief attending podiatric surgeon in the Orthopedic Surgery Department at Bassett Medical Center, in Cooperstown, N.Y., performing all facets of orthopedic surgeries of the foot and ankle. He is also a Lt. Colonel in the NY ANG/US Air Force where he serves as a medical officer.

Fr. Michael is the proistamenos of Annunciation in Vestal, and presiding priest and pastoral caretaker of Holy Trinity in Binghamton. His wife, Presvytera . Kimberly (Maria), (an instructor at the Elmira Business Institute) is head of the JOY/HOPE Program for both communities.

Fr. Michael was ordained to the priesthood by Metropolitan Nicholas on June 21, 2008. After serving in the U.S. Air Force more than 20 years, including 17 as a medical officer in the active reserves, he retired as a lieutenant colonel Sept. 5, 2014. Metropolitan Nicholas gave the invocation at the retirement ceremony.

Fr. Michael sees himself as “an ambassador between two communities,” he said. “My job is to try and unite two communities, eventually.” He said each community has its own legacy of history and tradition.

He has a long-standing working relationship with Metropolitan Nicholas. “We’re good friends and are in communication almost every day.” He recalled that, on the Sunday of Orthodoxy, the Metropolitan “drove for two hours through a snow storm from Rochester” for the service, which also was attended by 10 priests from area Orthodox churches. In addition to the Greek Orthodox community, there are two OCA churches, two Carpatho-Russian, two Ukrainian and one Armenian Apostolic church in the area.

He has become adept at managing a near-impossible daily schedule that includes his medical career and church ministry.

Vestal, the larger of the two churches, has an active altar boy group with 10 altar boys and three adult altar servers. He holds altar boy seminars three times a year.

There is a senior citizens group that meets “every few months for breakfast.” Health care is among the topics discussed.

One year, the parish sponsored a health fair at Annunciation that brought in area doctors who discussed their various specialties, and answered questions from people attending.

The parish has an adult and children’s Greek school. The community relies on dues as its main revenue source, but also hosts an annual four–day Greek festival that attracts 10,000 visitors and serves 6,000 dinners in four days.

Other fund-raisers include a golf tournament and an annual dance. Holy Week is an extremely busy time for Fr. Michael who performs about 17 services, some at both churches. Holy Wednesday, for example, he has one Holy Unction service at each of the two churches. The rest of the year, he has “almost nightly activities” at the church.-- parish council meetings on Tuesdays; seminars or senior citizens club on Wednesdays; JOY and HOPE on Thursdays; Bible studies on Fridays and Saturday morning sacraments. One Saturday a month he performs a Divine Liturgy at Holy Trinity in Binghamton. How does he manage? “It’s almost impossible; I’m constantly running back and forth to both cities,” he said, adding that “Presvytera runs with me.”