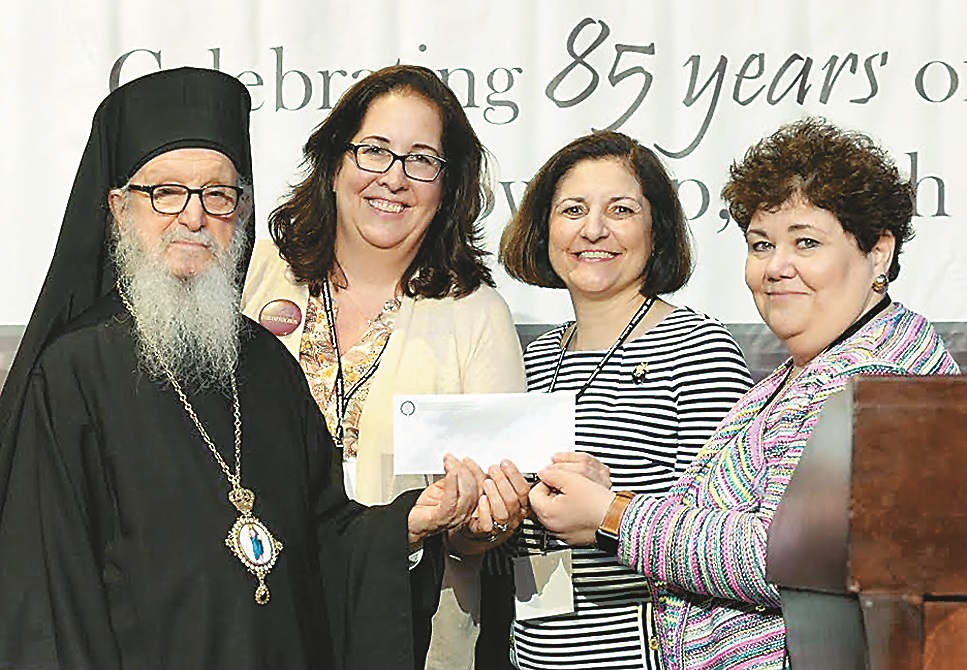 During the July 3 opening ceremonies of the National Philoptochos Society Biennial Convention, President Maria Logus presented Archbishop Demetrios with a $100,000 check on behalf of the nation’s chapters, which have been raising funds for the St. Nicholas Greek Orthodox Church and National Shrine Philoptochos Fundraising Initiative for two years. This brings the total Philoptochos donations to $1,328,400 toward the building project. Also present were National Philoptochos co-chairs of the fund-raising effort, Jennifer Constantin and Arlene Siavelis Kehl. Co-Chair Anne Michals could not attend. This donation brings the total amount raised by chapters across the country to $1,328,400.

On July 6, Jerry Dimitriou, the Archdiocese executive director for administration, spoke to the delegates about the building efforts, construction updates, and media attention about the church, which was truly inspirational. Mr. Dimitriou and the co-chairs expressed a heartfelt thank you to all Philoptochos members throughout the country for their commitment to this initiative. Of the $19 million collected thus far out of the $38 million pledged. Each convention delegate received a St. Nicholas Church and National Shrine pin to wear with pride as Philoptochos assists in the creation and resurrection of our church and spreading the message of Orthodox Christianity.

Delegates were also urged to visit the Shoppe Philoptochos while at the convention or to go online to purchase St. Nicholas National Shrine charms for the beautiful ladies’ Philoptochos sterling silver bracelets as well as elegant men’s Philoptochos silk neckties in navy blue and ruby wine colors. One hundred percent of the proceeds of sales of these three items benefit the St. Nicholas fund-raising initiative. For information and resources, visit: www.philoptochos.org/news/saintnicholas.

To be part of the St. Nicholas Church and National Shrine Philoptochos Fundraising Initiative, donate directly to the local chapter in your area or your Metropolis Philoptochos and support their fundraising activities and events.