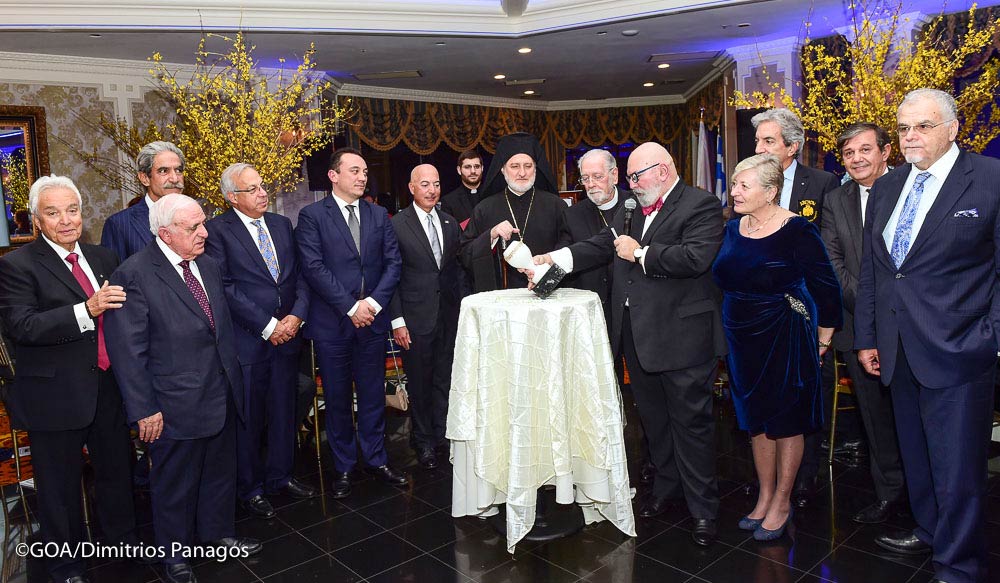 NEW YORK – The 24th Phidippides Award was bestowed last night to His Eminence Archbishop Elpidophoros of America for his passionate advocacy of Hellenism and Orthodoxy during the 33rd Anniversary Gala Dinner of the Hellenic Public Radio COSMOS FM 91.5. The event was held at Terrace on the Park in Flushing Meadows, NY.

The program presented the Greek-American actor Anthoula Katsimatides who served as the Mistress of Ceremonies. Constantinos Vlassis, the Deputy Minister of Foreign Affairs for Hellenes Abroad, offered greetings. Stelios Taketzis, the Chairman of GAEPIS (Greek American Educational Public Information System, Inc.), the parent organization of Cosmos FM, welcomed the Archbishop and all attendees to the auspicious evening. The Very Rev. Archimandrite Eugene Pappas offered thoughtful reflections as a tribute to the Archbishop. Archon Michael Psaros spoke about his appreciation of Cosmos FM, his enthusiasm about the work of the Church, the leadership of Archbishop Elpidophoros and the progress underway for the completion of St. Nicholas Greek Orthodox Church and National Shrine in the World Trade Center.

His Eminence in accepting the Phidippides Award, expressed his gratitude and said:

Receiving an award such as this, for doing the things you love the most, and for doing your duty, always presents the recipient with difficulties. The program note says for a “passionate advocacy of Hellenism and Orthodoxy.” But how do you accept congratulations for fulfilling your responsibilities? How do you welcome acknowledgment for the performance of your mission?