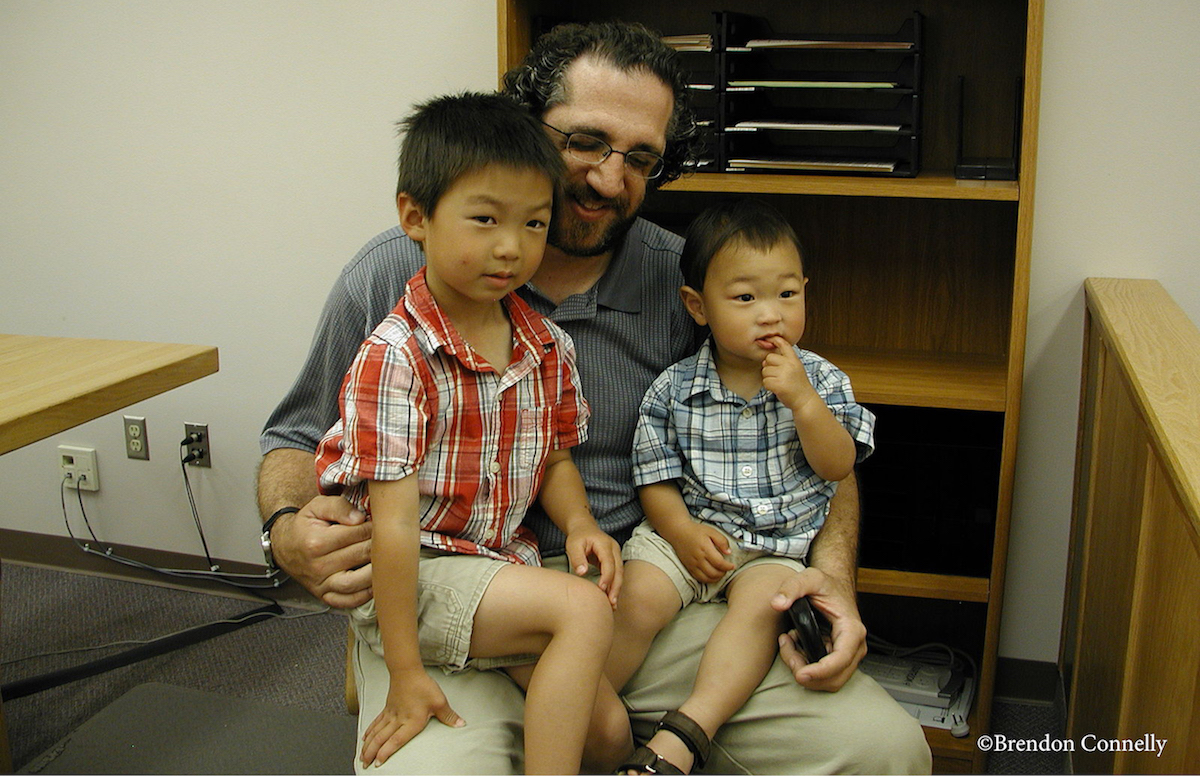 “Every good and perfect gift is from above” (James 1:17). We learned that slowly, after praying many years to conceive a child.  Our church family and friends also prayed long and hard.  We chanted the Canon to the Mother of God for numerous 40 day periods. We made pilgrimages to Greece and the Holy Land. On the island of Patmos my husband made daily visits to pray at St. John’s cave.  I remember the astounding grace of being in Nazareth, at the site of the Annunciation, and the joyful fervency of our prayers. We knelt at the Tomb of Christ, adoring, beseeching.

After 7 years of deeply felt prayer we finally let go and we decided we would not raise a child.  A few months later, a priest in Atlanta phoned, offering us the chance to adopt a baby born to a teen in his parish.  Our hearts leapt and the interior YES was immediate and complete. We finished the home -study quickly, but learned that the baby’s father would not allow the child to be adopted.  We were devastated and felt like we had had another miscarriage. With the steadfast encouragement of our friends we decided to go ahead and try to adopt, and nine months later our daughter came to us. We met her at the hospital when she was one day old, and spent beautiful hours with her Moroccan birthmother and some members of her family. We took pictures of everyone together, capturing wonderful shots of Nadia, her birthmother, holding our daughter, Isabelle, with great tenderness.  There was joy, sorrow, sweetness and grief all woven into the same afternoon.

When I look back on the photos from those early days I see the pure joy of “mother gladness” on my face – complete, unadulterated happiness. In the weeks following, our friends from the church whose prayers and financial support made this possible, came through our home to visit this child who was, in part, theirs as well.  There was deep peace and thankfulness, and when our priest led us in prayers of thanksgiving at the shrine of St. Elisabeth, the community that bore us up during the years of sorrow surrounded us, sharing our joy.

The early years were sweet.  Each milestone was stunning: crawling, walking, talking.  I remember a morning in our sun-drenched kitchen when I realized we had gone through 17 board books before breakfast.  She was curious, delighted with life: we found the delight contagious. Her life was centered in the nest of our home, and our lives were centered in the nest of our church community. When she was ready for school she attended the Orthodox school at our church where I taught part time, and I loved seeing her in her little blue uniform, joining her fellow students in song, prayer and learning.

We learned that it is common for adopted children to have developmental challenges. In the ensuing years two difficulties arose.  Isabelle began to have problems with anxiety, which came out strongly at school.  On the advice of friends who had faced this with their children we found a fine treatment program. Without any medication, our daughter was back in balance after several months. She has needed only one return to the center for help, and again, after a few months of skillful training she was able to master the challenges of her anxiety.

Shortly after this we realized that she had difficulty with reading. As is often the case with dyslexic children, she was bright and articulate - the teachers did not fully recognize the problem.  We found an excellent tester and learned that Isabelle had both high intelligence and serious difficulties decoding language. We found a trained tutor and sent her to a summer camp which specializes in teaching children with language-based learning disabilities. She enrolled in their school for Middle School and loved it. One of the most important aspects of this experience was that it normalized both her dyslexia and her adoption, since so many children with learning challenges have been adopted. She learned that with dyslexia there is always a compensatory gift.  Hers is in the area of art, and we provided opportunities that fostered the growth of her gift.

One of the challenges that can arise with an adopted child is questions about the birth family. The adoption was always an accepted part of our family narrative, and she often looked at the baby pictures of her with Nadia.  She would proudly show these pictures to special friends and each night she prayed for Nadia. For some years she expressed a wish to hear from Nadia and when we sent updates through the adoption agency we would pass along that message.  After a time she simply let that go, though it may be something she will pursuit later in her life.

We tried to find ways for her to become familiar with Morocco, and Arabic cultures in general.  When she crested into the teen years we started going to an Antiochian Church that had a strong youth program, with teens from numerous cultures:  Lebanese, Eritrean, Syrian, Ethiopian.

We live in a racially mixed community and she goes to an urban, economically and culturally diverse high school. This has been important to her, after spending her middle school years in a largely white, upper class private school. She is weaving an identity from strands of many cultures – bright threads put together in a lively, unique pattern.

Two major blessings have helped us in raising our daughter. The first is prayer. “Ask and it shall be given to you, seek and you shall find” (Mathew 7:7).  It was our frequent, fervent prayers, augmented by the prayers of our loved ones, which brought us a child.  It has been the steady prayers of Godparents and friends that have guided us at each turning point, helping us use proper discernment to be clear on our choices. We have offered frequent prayers of thanksgiving for being allowed to raise such a beautiful, talented, warm hearted, engaging, sensitive child. And now that Isabelle shows resistance to being involved in church, we try to adhere to the wise advice: “Talk more to God about your child than to your child about God”.

The second blessing has been being able to face difficulties directly; seeking help from pastors, friends, and professionals. Sometimes it seems that it may be less complicated to do this with an adopted child, as one is not concerned with wiring glitches or concerning psychological behaviors as a reflection of one’s own genetic makeup or ancestry.  (We have had moments of serious consideration about the ways in which our own weaknesses affect our daughter, and this sort of reflection has a place for all parents). We have been able to be frank and direct with Isabelle at each point, and a matter-of-fact, proactive tone has always been enormously helpful.  With both the difficulties of anxiety and dyslexia she was relieved to have it named and addressed head-on.  And in each circumstance we have had examples of people she admires who have already faced those dragons and slayed them.

I have always appreciated the Orthodox perspective that accepts difficulties as a reflection of God’s love. I remember reading a book about the life of St. Irene Chrysovalantou in which she said that if we knew the spiritual benefit of illness we would pray to be ill every day of our lives. By the time we let go of our active efforts to have a child I knew that there had been a deep blessing in the trial, even as I grieved the outcome.  Then later, when Isabelle came to us, I saw how my view of adoption as somehow “second best”, as though God didn’t really love us, was simply wrong. We have learned, and hopefully are helping Isabelle to know, that it is possible to accept and deal with life’s hard challenges in the deep knowledge that all things come to us with blessing from God.

Anna Higgins has taught creative writing and literature in various settings for 17 years. She taught for twelve years at St. Herman of Alaska Christian School, and now teaches homeschool groups and adult day center groups for people with various disabilities.  For the past two years she has been a part of the writing program at Hellenic College and has done some tutoring for Holy Cross Greek Orthodox School of Theology students. She has worked in the field of psychology, both in-patient and with those living in an out-patient setting. She converted to Orthodoxy 25 years ago, with great gladness. Anna is married to Jim. Adopting and raising Isabelle has been one of the greatest joys in their life.