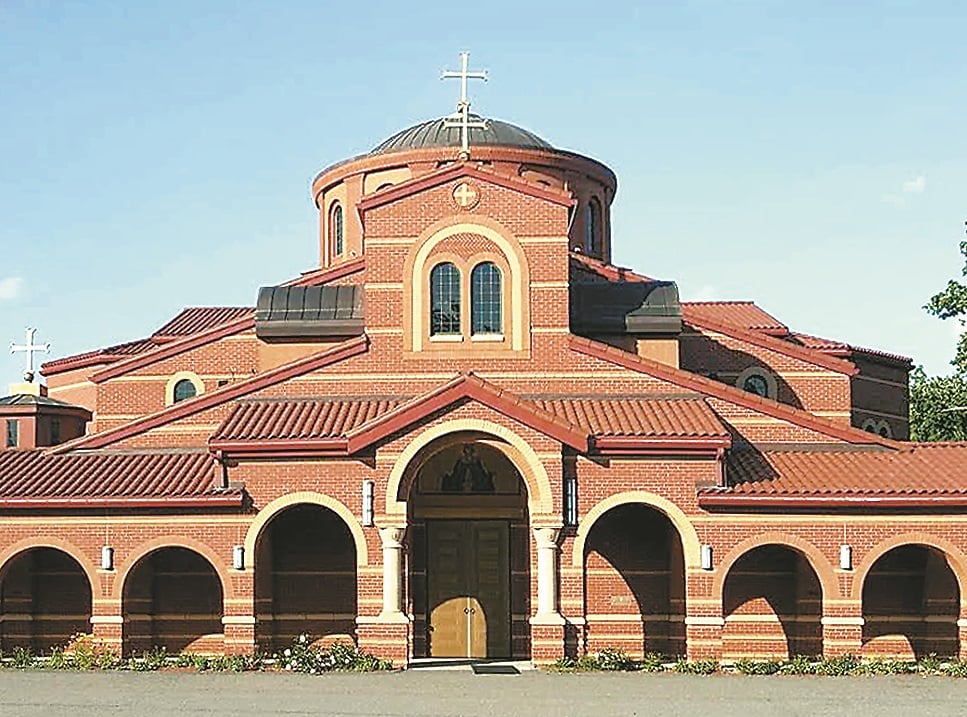 BRAINTREE, Mass. – According to a parish history, following the Second World War, a growing number of Greek Orthodox people began to populate the southern and western suburbs of Boston, which at the time, were being serviced by the clergy of Boston. By the late 1950s it was apparent that a new church was needed at the gateway to the South Shore to serve the spiritual, educational, cultural, and social needs of the growing number of faithful living in the cities and towns that constitute the “South Shore.”

In 1959 a group of dedicated families devoted to the church and their ancestral heritage organized the “South Shore Hellenic Association” to pursue the establishment of a Greek Orthodox church in a locality accessible to most families living the area. After a period of negotiations, the Archdiocese issued a charter for the establishment of a Church community. A fund-raising campaign culminated in the purchase of the United First Parish Church of Quincy, which was built in the late 19th century and located on Beale and Farrington streets. The building was renovated and converted into an Orthodox church with all the essential liturgical appointments. The church was dedicated to St. Catherine the Great Martyr of Alexandria.

The newly established parish began functioning officially on Oct. 23, 1960 with the appointment of an interim priest, Fr. Dean Timothy Andrews. One year later the parish was assigned a permanent priest, Fr. Demetrios Michaelides. Both priests were from the first graduating class (1942) of Holy Cross Theological School. The parish was formally incorporated by the Commonwealth of Massachusetts in December 1961 as the Greek Orthodox Community of South Shore under the jurisdiction of the Archdiocese. Catherine Pappas, the long-time president of the National Philoptochos Society, was declared patron and sponsor of the church.

Within two decades of its existence, it was apparent that the parish was outgrowing the Beale Street property with its very limited possibilities for expansion. Thus in 1982 the parish made a bold move, purchasing the six-acre site of the old Pappas Farm and Picnic Grounds near Interstate Highway 93 at the crossroads of the South Shore in Braintree, a city of about 36,000, founded in 1625 and named for Braintree, England. It is best known as the birthplace of Presidents John Adams and John Quincy Adams, and statesman John Hancock.

Plans for the future church and community center developed slowly due to several factors. In 2000 the parish established a building committee to develop plans for the Braintree site. In 2001 the parish engaged the services of Christ Kamages, a prominent architect whose firm has an impressive record designing and building a large number of Orthodox churches in the United States, including several in New England. Within three years plans for the new site were developed, financial arrangements with local banks were made, and a successful building fund campaign was conducted. The new community and educational center was completed in the autumn of 2004. Its grand hall would house the interim sanctuary for several years.

Parish life in Braintree began quietly but joyfully–with renewed hope and commitment–on the weekend of Oct. 9-10, 2004 when the doors of the new center were officially opened and the first Divine Liturgy was celebrated in the interim sanctuary. Thus, St. Catherine parish found a brand new home and a renewed sense of purpose and mission. In the summer of 2007, the parish embarked on Phase II of its building program. After careful planning and new fund-raising initiatives construction began on the new church. Thanks to the hard work of many volunteers and the generous contributions of parishioners and friends, beginning with the magnanimous gifts of the grand patrons and sponsors George and Caterina Sakellaris, Phase II of the building program was brought to a successful conclusion.

On March 29-30, 2008, with Metropolitan Methodios presiding, the parish celebrated the Thyranoixia of the new church laying claim to the Byzantine style edifice as its permanent house of worship on the cornerstone of which are inscribed the words: “My House shall be called a House of Prayer for all Peoples” (Is. 56:7). In 2013 the parish initiated Phase III of the building program: the interior decoration of the church. Dr. George Kordis, the master iconographer and professor of iconography at the University of Athens Theological School, was selected to develop and execute the iconographic scheme. The work was completed in 2015. Significantly, the 2016 almanac of the Ecumenical Patriarchate in its initial pages features in color the interior of St. Catherine with its iconography. The parish council is currently planning to Phase IV of the building program, the beautification of the church grounds.

The church and center sit in lovely rustic surroundings that await further development and beautification. The community center includes the grand hall, a suite of administrative offices, modern kitchen facilities, and the Cacridas Learning Center with its several classrooms, a large reception hall, and meeting rooms, The site also offers ample parking facilities. The parish offers a variety of ministries, including a thriving Sunday School, Greek School, Summer Vacation School, and adult educational programs; an active Philoptochos Society and a parents association; several youth groups including Hope, Joy and GOYA, and an impressive children’s choir. The Philoptochos and youth groups participate in several outreach programs including support of the Philoxenia House of the Metropolis of Boston and the Braintree Food Pantry. The parish council consists of 15 members. Until March, the parish was served by Fr. Philippe Mousis. In the interim period, as of this writing, the Rev. Dr. Alkiviadis Calivas, retired professor at Holy Cross School of Theology, has been serving at the parish.