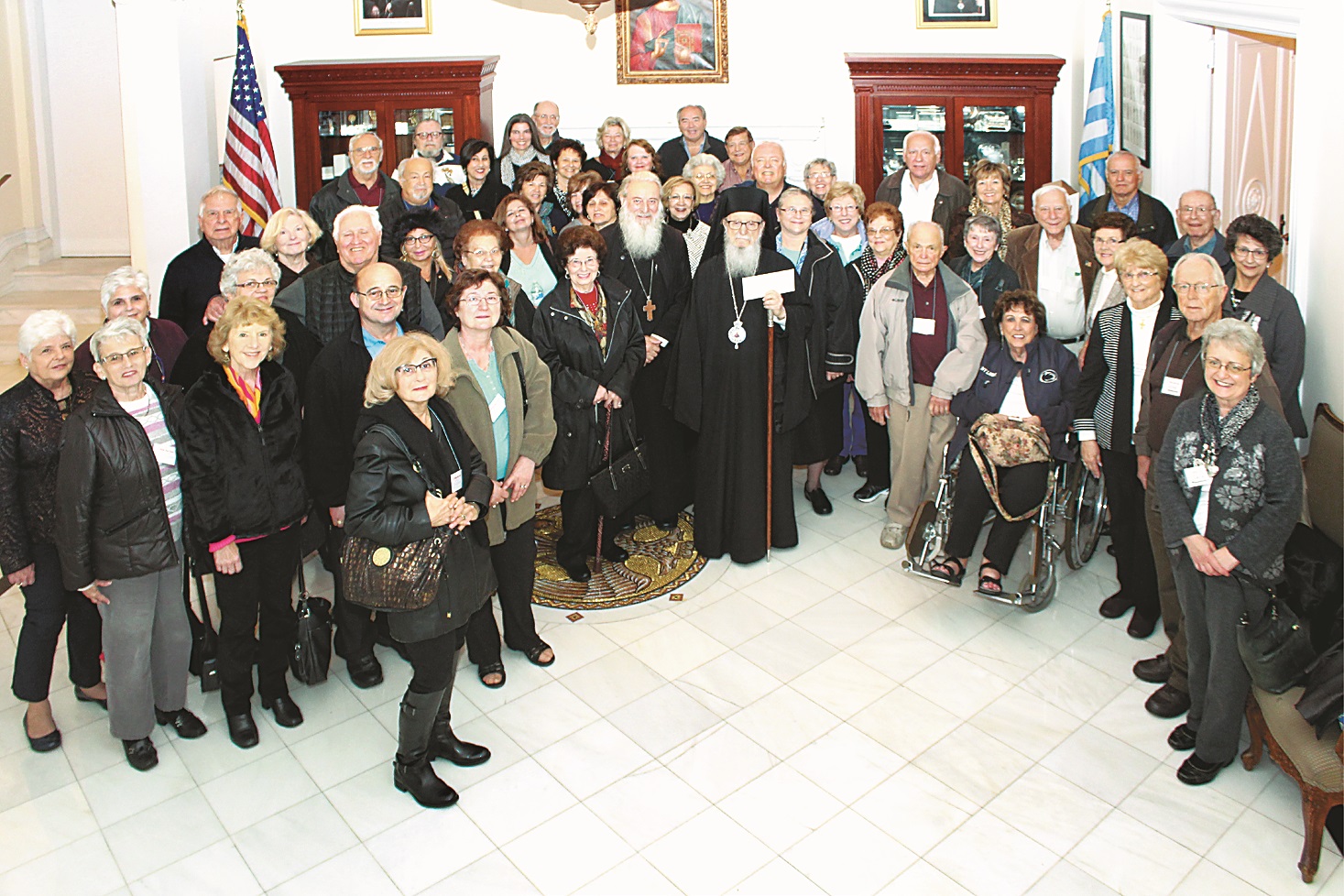 St. Nicholas visitors: Senior citizens from Holy Trinity Cathedral in Camp Hill, Pa., led by Fr. Michael Varvarelis, visited Archdiocese headquarters Oct. 24 on a two-day visit to New York. Archbishop Demetrios greeted them and spoke to them a length about progress at St. Nicholas Church and National Shrine. They had presented a donation for the project. Their trip also included a visit to the St. Nicholas site at the World Trade Center.
© Orthodox Observer

The Philoptochos chapter of St. Demetrios Church in Rocky River, Ohio in the Metropolis of Pittsburgh held a 9/11 gyro sale to honor the fallen heroes at ground zero on that fateful day and to raise funds for the St. Nicholas Greek Orthodox Church and National Shrine Philoptochos Fundraising Initiative.

More than $7,000 was raised in one afternoon for the cause.

Harnessing the popularity of their church festival drive-thru concession, the Philoptochos planned a drive-thru sale on Sunday, Sept. 11 to raise funds for the St. Nicholas initiative. The drive-thru menu consisted of gyros, french fries, loukoumathes, baklava, soft drinks and water. Getting the word out was key. The sale was placed on event lists at newspapers and distributed via email blasts.

The committee distributed flyers to area businesses, police stations and fire stations to enlist the support of the community-at- large. Letters went out to the church community requesting monetary donations. Fr. Anastasios Athanasiou, assistant priest, forwarded a letter via an e-mail blast to all of the non-Orthodox clergy in the surrounding area, asking them to inform their parishioners of the purpose of the sale and to encourage them to support the cause. Finally, during the week preceding the sale, large signs were placed in front of the church advertising the drive-thru sale. On the day of the sale, flags drew the attention of the passing cars, encouraging them to drive in.

The members were overwhelmed by the kindness and support of their customers, as many told them to “keep the change” and even contributed extra donations. Customers came from surrounding area churches, relating that their pastor had mentioned the sale in that morning’s announcements.

Barbara Pasalis, National Board member, and Stephanie Zavatchen, chapter president, organized an enthusiastic team of 20 who cooked and wrapped gyro, chopped tomatoes and onions, prepared french fries and loukoumathes, packaged baklava, and filled orders. The fellowship was strong, and it was a fun-filled day for everyone, all for a worthy cause.

The St. Demetrios Philoptochos attributes their success to understanding what works in their community. The drive-thru concession draws customers for four nights straight during the festival. It is extremely popular in Rocky River, and the residents were thrilled to have an opportunity to drive thru again in September. Every Philoptochos chapter should plan an event that is uniquely suitable for their community.

Support the local Philoptochos chapter(s) in your area or your Metropolis Philoptochos with your donations. For further information and resources, visit www.philoptochos.org/news/saintnicholas.