New York – His Eminence Archbishop Demetrios of America, with the blessings of His All-Holiness Ecumenical Patriarch Bartholomew, will receive during a special ceremony on November 15 in Chicago, Ill., a rare 9th century Greek manuscript (Codex 1424) of the complete New Testament which is being returned by the Lutheran School of Theology at Chicago (LSTC) to the Greek Orthodox Holy Metropolis of Drama, Greece. 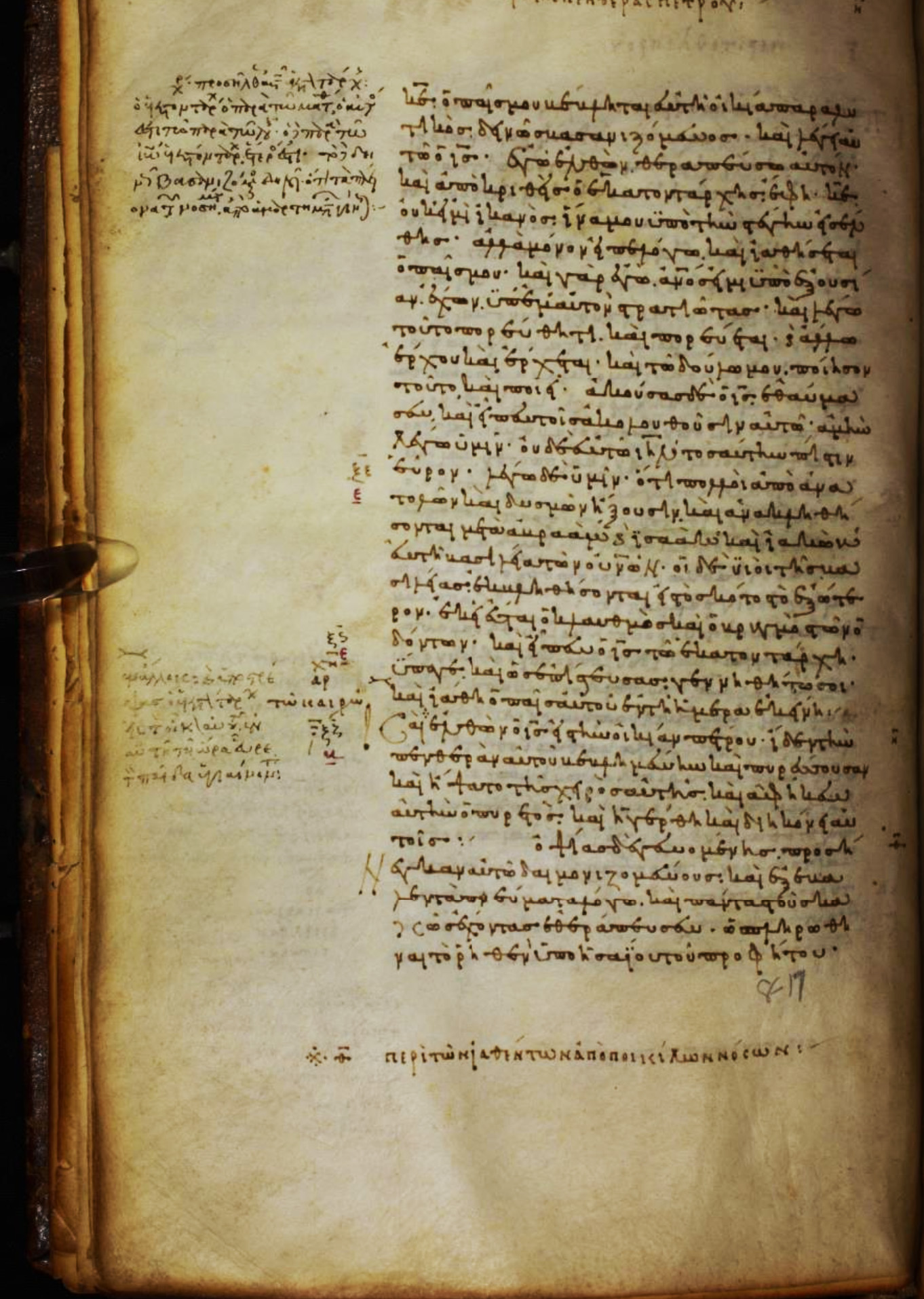 “Today, in the spirit of the upcoming Thanksgiving holiday, our hearts are filled with gratitude to our Lutheran brothers and sisters for this generous and kind gesture” said Archbishop Demetrios. “Nearly a century ago, our faithful lost an integral part of the treasures of our Orthodox faith and tradition when the library of the Monastery of Panagia Eikosifoinissa (Kosinitza Monastery) was ransacked and many manuscripts, Codex 1424 included, were taken. We hope that other collections in the United States which also possess manuscripts originating from the Monastery of Panagia Eikosifoinissa will follow the fine example set by LSTC and voluntarily return the manuscripts to their rightful home. Our gratitude to LSTC is enormous indeed for adhering to the original spiritual intent and moral mandate of the manuscript itself.”

The President of LSTC, James Nieman, said: “For nearly a century, we have been blessed to be the stewards of this remarkable document, and today we are blessed again by the opportunity to return it to our Greek Orthodox friends and strengthen the bond we have together in Christ Jesus.”

At the end of November, Archbishop Demetrios as well as the President of LSTC James Nieman will be at the Ecumenical Patriarchate for the Thronal Feast of Saint Andrew and then will travel to Greece to participate in ceremonies for the return of the manuscript to the Holy Metropolis of Drama.

The manuscript, known among biblical scholars as Codex 1424, was one of many manuscripts taken in 1917 from the Monastery of Panagia Eikosifoinissa, in the Paggaion mountain range near the city of Drama, in Greece, following the Balkan Wars of five years earlier. It found its way to a European book dealer and was purchased in 1920 by Levi Franklin Gruber, who later became president of Chicago Lutheran Theological Seminary, one of LSTC’s predecessor schools. Gruber bequeathed the codex to his widow, and the seminary later received his entire rare book collection from her. Earlier this year, the Ecumenical Patriarchate directly and through its representation in the United States, requested the return of the manuscript, to which LSTC voluntarily and readily agreed.

Greek manuscripts that contain the entire New Testament are rare. According to biblical scholar Kurt Aland, there are only 60 such manuscripts in world collections. Codex 1424, written in the ninth century A.D., is the oldest complete minuscule manuscript (written in cursive script) of the Greek New Testament in the world. Moreover, the order of the books of the New Testament is unusual. For example, the book of Revelation, today located at the end of the New Testament, in the Codex 1424 precedes the Pauline letters. The manuscript was copied by a monk named Savas, and other monks three centuries later added excerpts from St. John Chrysostom, St. Basil the Great, St. Gregory of Nyssa, and others as commentaries in the margins of the pages.

The Center for the Study of New Testament Manuscripts has photographed the manuscript. It may be viewed at www.csntm.org/manuscript/View/GA_1424?filter=1

Ralph W. Klein, curator of the LSTC rare book collection, said, “Manuscripts like Codex 1424 enable New Testament scholars to construct a definitive text of the Greek New Testament since none of the original texts has survived and ancient manuscripts contain thousands of variant readings. We are indebted to our ancestors in the faith who took such care that the Sacred Scriptures were preserved for posterity. Codex 1424 represents the Byzantine family of manuscripts that became the backbone for the Textus Receptus in the 16th century and was the Greek edition used by the translators of the King James Version.”