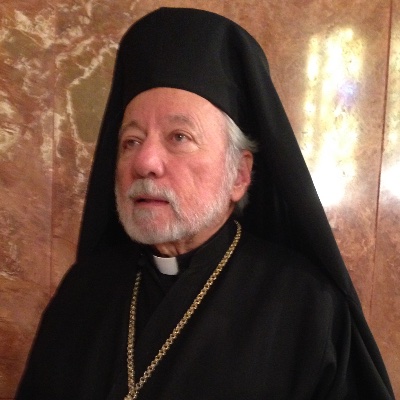 Fr. Spencer T. Kezios, a priest of the Greek Orthodox Faith, was born in Chicago, Illinois. His home parish was the Assumption Church where he served as an Altar Boy and where he was ordained a deacon. During his teen years he was a very active participant in youth ministry as A Jr. Goyan. The Central Council of comprised of representation of all the Chicago parishes elected him as their president in 1951. It was during those years he came to know Chrisanthe Marinakos. Their friendship grew to love and they married in July of 1957. They have been blessed with four loving children: Mark, Evonne, Trevon, (Jennifer) and Nicholas, and grandchildren Roman and Mia. In 2012 after a prolonged illness Presbytera Chrisanthe passed into life eternal on Easter Sunday.

After ordination Fr. Kezios served parishes in Keene, New Hampshire; Gary, Indiana and Pocatello, Idaho. In 1960, Fr. Kezios began serving the Parish of Saint Nicholas in Northridge, California where, after 45 years, he retired, accepting the honor of Pastor Emeritus.

Under his spiritual guidance the Saint Nicholas Parish grew from a mission parish into a prominent center of Faith.

In 1967, Saint Nicholas Church, which had been located in Granada Hills, outgrew its facilities and moved to Northridge to a newly erected church, an administration building and a twelve-classroom school.

In his early years at Saint Nicholas, Fr. Kezios was one of the three original incorporators of Guadalupe Home for Boys.

In 1977 he founded Saint Nicholas Parochial School which has distinguished itself by its high academic standards.

In 1978, a new Community Center was erected providing an additional thirteen classrooms, meeting rooms, a separate gymnasium as well as a ballroom.

Some of his extraordinary assignments have been the production of five educational films. The first of these, “A Boy Named Panatiotis,” was produced when Archbishop Iakovos asked Fr. Kezios to produce a film to bring the plight of the people of Cyprus to the American people after they suffered the Turkish invasion.  In addition, he produced and directed a folkloric program of the music and dances of Cyprus which toured the United States.  The net proceeds of this program benefited the refugees of Cyprus.

Immediately following the fall of communism in Albania, Archbishop Iakovos once again called on Fr. Kezios to assist the efforts of the Church to have the Albanian government accept  Anastasios as Archbishop of Albania.  After meeting with Archbishop Iakovos and Mr. Samaras, the then Foreign Minister of Greece, he was assigned to a delegation which was sent to Albania to assist in the furtherance of this request of the Ecumenical Patriarchate for the appointment of Archbishop Anastasios.

In 1994, experiencing the real lack of cantors versed in Greek and able to chant the Office of Orthros, he embarked upon translating the complete Orthros services from the original Greek into English, a monumental task. The Office of Orthros chanted prior to the Liturgy changes each and every week and each and every year. The complete Orthros service for every week of the year is now published semi-annually for use by both Priests and Cantors. It has now become a familiar resource and because of its size affectionately referred to as the “Kezios phonebook.”

That same year he and his good friend, the late Fr. Leonidas Contos, formed Narthex Press, primarily dedicated to providing liturgical translations into contemporary English. Although Fr. Contos passed on in 1995, Fr. Kezios has continued the work of Narthex Press with the publication of forty two volumes, and an additional four liturgical music books and CDs.  He recently published a beautifully illustrated book, The Bible for Young People.

Fr. Kezios has also chaired the Liturgical Translation Committee of our Archdiocese in the past, and has served on various committees of our Church and Archdiocese; among the dearest, as a member of the Executive Committee of his Alma Mater, the Holy Cross School of Theology.  He has also served as a Trustee for the Patriarch Athenagoras Orthodox Institute of the University of California, Berkeley.

Upon his retirement as Pastor of Saint Nicholas, the Vestry in the Chapel of the Holy Cross School of Theology was named in his honor.

His activities and involvements go beyond the Church and extend into the Community as well. He has been active in various civic and community affairs.

He presently serves as a Chaplain for the Los Angeles Police Department and was also a member of its Chaplain’s Advisory Board.

In 2005 the Mayor of Los Angeles, Antonio Villaraigosa, appointed Fr. Kezios as a member of the Planning Commission which plans for the future development of the City It adjudicates issues of planning and zoning which are brought before the Commission.\

In retirement he has continued translating liturgical services especially for the Ecumenical Patriarchate.  Two of note are the Sacred Service of the sanctifying and of the Holy Chrism for the Sacrament of Confirmation which takes place at the Ecumenical Patriarchate during all of Holy Week; the complete edition of all the Sacred Services which were celebrated during the Holy and Great Council in Crete in 2016. 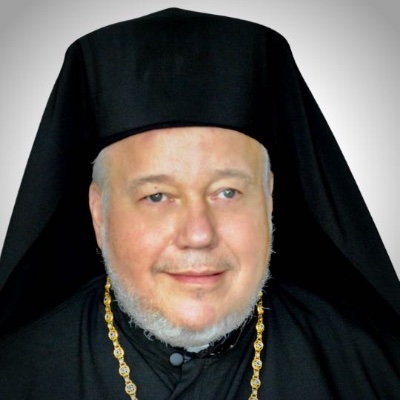 The Very Rev. Fr. Timothy G. Bakakos, son of the late Demosthenes and late Antonia Bakakos, was born in Chicago, Illinois in October of 1952, and is the second of four sons.  Father Timothy, along with his siblings, was raised and spent his childhood and teen years at the Assumption (Panagia) Church of Chicago, where he attended the Sunday Church School and Greek School programs, as well as serving as an altar boy and participating in the youth programs of the parish.  Father Timothy is a product of the Chicago Public School System, where he attended Lane Technical High School for three years before moving with his family to Park Ridge, finally completing high school at Maine Township High School South.

In September of 1970, after being nurtured by his Parish Priests, the Rev. Theodore Thalassinos, the Very Rev. Kallistos Samaras (the late Bishop Kallistos of Zelon of blessed memory), and the Rev. Demetrios Treantafeles, he entered Hellenic College/Holy Cross School of Theology in Brookline, Massachusetts.  In 1972, with the blessing of His Eminence Archbishop Iakovos, the late Archbishop of North and South and South America, he left for Greece where he attended Pierce College in Agia Paraskeve.  Returning to Hellenic College in 1973, Father Timothy received his Bachelor of Science Degree in 1975, and entered Holy Cross School of Theology, receiving the Degree of Masters of Divinity in June of 1978.

During Father Timothy’s forty years of priestly ministry, he has served the following Parishes (all within the Metropolis of Chicago):

In addition, listed are other notes:

• Bestowed with the rank of Archimandrite in 1984 by His Eminence Metropolitan Iakovos of blessed memory.

• 1987 – 1997 - Served as Staff Chaplain for Illinois Department of Mental Health at the Elgin Mental Health Center in Elgin Illinois.

• 1991 – 1993 – Assisted in the fundraising and construction of a $1.2 million Community Center and Church Offices at Saint Sophia Church in Elgin Illinois.

• 2003 - 2004 – Assisted the Parish in a $1.5 million fundraising project for iconography at the Saint Nicholas Church in Oak Lawn Illinois

• 2010 – 2011 – Assisted the Parish in a two hundred thousand fundraising project to renovate the Saint Catherine Chapel at the Assumption Church in Chicago. 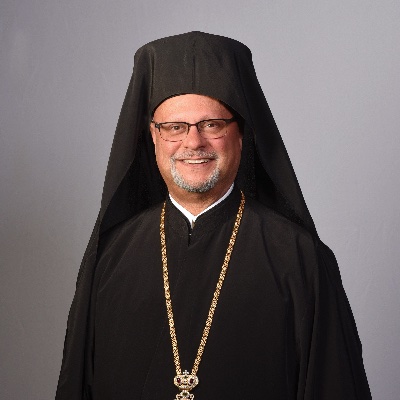 Father John was born in Richmond, Virginia to Ernest (of blessed memory) and Artemis Constantine. He and his family were active stewards at Saints Constantine and Helen Greek Orthodox Cathedral in Richmond. Following his graduation from Thomas Jefferson High School, he enrolled at the University of Richmond, earning a Bachelor of Science degree in Biology (1979) and a Master of Science degree in Biology (1981). After working as the Operations Manager for an environmental consulting firm, he entered Holy Cross School of Theology in Brookline, Massachusetts in the fall of 1983 and received his Master of Divinity, with distinction, in 1987.

Following graduation, he served as the Lay Assistant for Youth Programs at Holy Trinity Greek Orthodox Cathedral in New Orleans, Louisiana. While in New Orleans, he was accepted into the US Navy Chaplain Candidate Program and commissioned an Ensign in the US Naval Reserve on December 12, 1988. In 1989, he began his duties as an administrative assistant to His Excellency Metropolitan Silas of New Jersey at the Archdiocesan Headquarters in New York City. In June 1990 he began a series of Navy training assignments on board the USS LEXINGTON (AVT-16) in Pensacola, Florida; Marine Corps Base in Camp Pendleton, California; and the Naval Amphibious Base in Coronado, California.

In October 1991, he received the blessing of His Eminence Archbishop Iakovos to be ordained a celibate priest. On December 14, 1991 he was ordained to the Holy Diaconate at his home parish of Saints Constantine and Helen in Richmond, Virginia, and on December 15, 1991 he was ordained to the Holy Priesthood at Saint Elpis in Hopewell, Virginia by His Excellency Metropolitan Silas. Although ordained for service to the US Navy, Father John was obedient to the needs of the Church and was assigned to Saint George Greek Orthodox Church in Piscataway, New Jersey in February 1992. While serving at Saint George, Father John was appointed a regional Youth Commissioner for the Diocese of New Jersey. He also sat on the Spiritual Court for the New Jersey state region. He was conferred the offikion of Oikonomos on November 14, 1992. On July 23, 1995, His Excellency Metropolitan Silas elevated Father John to the ecclesiastical rank of Archimandrite prior to entering active service in the US Navy.

In August 1995, Lieutenant John E. Constantine, Chaplain Corps, United States Navy, reported for duty at the Naval Air Station, North Island in San Diego. He established a proactive flight line ministry to 14 helicopter squadrons, the Marine Corps Security Force Company, and various other units at North Island. He celebrated the Divine Liturgy at the Greek Orthodox Chapel of the Holy Cross on board US Marine Corps Recruit Depot, San Diego.

While in San Diego, Father John assisted the parish of Saint Spyridon Greek Orthodox Church whenever available. In October 1998, upon completion of his tour of duty, he was assigned to Saint John the Baptist Greek Orthodox Church in Anaheim, California as Associate Priest by His Eminence Metropolitan Anthony of San Francisco.

He was appointed Proistamenos of Saint George Greek Orthodox Church in Downey, California on June 1, 2001. He arrived at the Parish as the footings of the new Church building were being poured. Under his leadership for the past 19 years, the parish has increased its visibility and activity among the Greek Orthodox parishes in southern California.

His Eminence Metropolitan Gerasimos appointed Father John as Chairman of the Metropolis Folk Dance Festival in 2007 and Co-Chairman in FDF 2008, offering his clarity and leadership as these were periods of transition for this important and vital ministry of the Metropolis.

He was elected a member of the Metropolis Council for the Metropolis of San Francisco in 2012. He served as chairman of the Bylaws Committee, providing guidance to parishes in the Metropolis to ensure conformity with the Uniform Parish Regulations of the Archdiocese.

With the onset of the COVID-19 pandemic, Fr John took an increasingly active role in administration of the Metropolis as he assisted Metropolitan Gerasimos in navigating the ever-changing landscape of the pandemic while still serving his parish of Saint George.

On June 1, 2020, His Eminence Metropolitan Gerasimos appointed Father John as Chancellor of the Metropolis of San Francisco.