Metropolitan Savas to be Enthroned Dec. 8 in St. Nicholas Cathedral in Pittsburgh 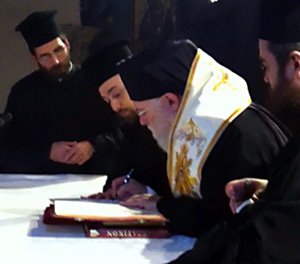 Mega Minima Ceremony at the Phanar

NEW YORK – The special services known as Mikro Minima and Mega Minima (the official announcement of election) were held today at the Patriarchal Cathedral of St. George in Constantinople. In the presence of ten hierarchs of the Ecumenical Throne the Great Ecclesiarch Archimandrite Benjamin read the official decision of the election followed by the reading and signing of acknowledgement, of acceptance and gratitude by Metropolitan Savas.

Earlier on, in the Patriarchal office, His All Holiness Ecumenical Patriarch Bartholomew addressing the new Metropolitan, first praised retired Metropolitan Maximos of Pittsburgh, for his long and faithful service to the Church. His All Holiness said that the Holy Eparchial Synod of the Greek Orthodox Archdiocese has expressed their preference and trust to you and Archbishop Demetrios has expressed his love and esteem for you and all these expressions are well justified because of  “your ethos, your love of the Church and your rich education and the depth of your knowledge.”

On Thursday, Dec. 8, 4 p.m., His Eminence Archbishop Demetrios of America, Primate of the Greek Orthodox Church in America, will preside at the enthronement of Metropolitan Savas of Pittsburgh at Saint Nicholas Greek Orthodox Cathedral, 419 South Dithridge Street, Pittsburgh Pennsylvania.

The Holy and Sacred Synod of the Ecumenical Patriarchate of Constantinople elected on November 3, His Grace Bishop Savas of Troas as the Metropolitan of Pittsburgh to succeed Metropolitan Maximos, who retired on September 1, 2011.

The entire Enthronement ceremony will be broadcast Live on the Internet Thursday, Dec. 8, 2011 beginning at 3:30 p.m. (EST) and a link will be available on the home page of the Archdiocese.