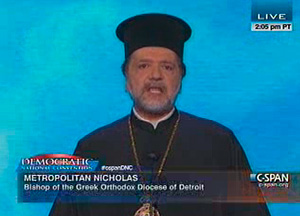 NEW YORK – His Eminence Metropolitan Nicholas of Detroit, representing Archbishop Demetrios of America delivered today, shortly after 5 p.m. (EDT), the invocation at the official opening of the Democratic National Convention in Charlotte, NC.  Originally,  Archbishop Demetrios was scheduled to offer the opening prayer, at the invitation of President Barack Obama, but was unable to do so due to his travel schedule.

O God most pure and Author of all creation;
As you spoke to us of old,
Speak to our hearts anew;

You who had fellowship with Abraham and Sarah,
Come and stay in our midst;

As You led your people through the wilderness,
Lead us now, as the Democratic National Convention opens its deliberations
for the benefit of the people and the land of these United States;

You have brought us here from every place on earth, that Native Americans and Immigrant Americans, People of Color and of every Tongue,
might find not just hope, but a land which seeks life, liberty and the pursuit of happiness.

Grant to all here a deep and abiding respect for the task at hand, so that our common efforts will perfect our desire that law and government be for, by and of the people.

Assist us to set aside personal differences, so that our unity of purpose will be rise above us all as an enduring symbol of freedom.

Let freedom reign in our hearts so that we would never fear to lead the oppressed to freedom; never fear to give shelter to the homeless and displaced; never fear to treat our neighbor as our selves; to give dignity and opportunity, as in Detroit and elsewhere in America, to the struggling unemployed and less fortunate brothers and sisters in this great land. Let us never be afraid.

While our prayers and assistance are with those affected by Hurricane Isaac, we trust in You, O Lord, that your gracious love will be with our President, Barack Obama, with our Vice-President, Joseph Biden; with all of our public officials and those who serve the good of this Nation.

We ask also that You preserve and protect those who stand in harm’s way, as they defend and serve for the benefit of all.

Come and be with us, O Mighty God, as fortress and deliverer, so that through You, and by the faithful and strong leadership of our government, we shall rejoice knowing that our children and our children’s children will know peace and every blessing.