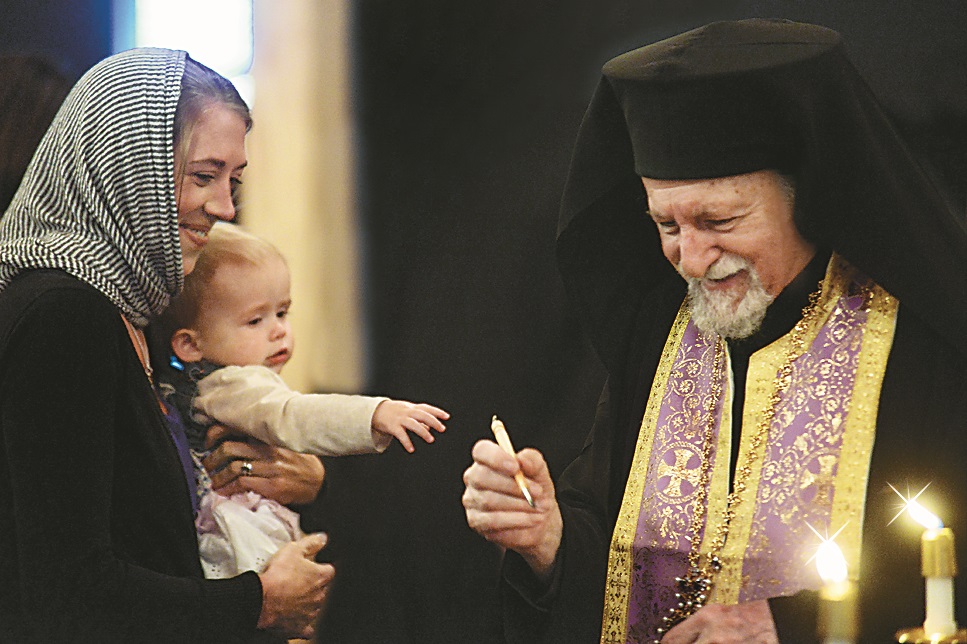 Editor’s note: This is the third in a series of e-mail interviews conducted by contributor Dean Sirigos with each of the Metropolitans of the Archdiocese. Metropolitan Isaiah of Denver is featured.

O.O: Metropolitan Isaiah, you have a long association with Hellenic College Holy Cross School of Theology, as a student and later as an administrator serving as director of student life, dean of students and dean of administrative affairs. What are some of the highlights of your experiences there, and how would you compare the school then with the present day? What are some important distinctions?

As a student I enjoyed the closed environment where we had common meals as family and specific times for sleep, study, and recreation. This probably was the case because of my previous military experience. As well, I felt that the theological education and priestly formation I received prepared me well for my future ministries; pastoral and administrative.

As dean of students, I valued the relationships established among another generation of future clergy of our Archdiocese, many relationships which continue strong to this day. Likewise, during my time as dean of students I converted the administration annex to a women’s dormitory when the teacher’s college at Saint Basil Academy had closed in 1973, and at least 50 women students became part of the campus. The concept of seminary was still active with the common meals which strengthened the family-type of environment.

As president, I thoroughly enjoyed my work at the School. Having lived there and participated in the life of the School for 14 previous years, I brought a broad, long-range perspective to the position. Although I was asked to accept a second year as president, I had to return to Denver to begin the fundraising efforts for what would become our Metropolis Center.

I believe that the School has been changing, but the centrality of the liturgical practice in campus life remains a constant, and is the focus of those who wish to serve Christ’s Church in America.

O.O: Were there members of your family who were clergymen dedicated to the Church who inspired you? Did anyone in your early life have a major influence in your becoming a priest? Was there another field that you were interested in other than the priesthood?

METROPOLITAN: My identity as a Greek Orthodox Christian was constant in my life from a youngster, a teenager, and as an adult.

Many young people think of different occupations as they grow up. While in high school, I had thought for a time of becoming an architect. It was not until after my service to our country in the United States Marine Corps that I decided to attend the seminary.

O.O: After graduating from Holy Cross Seminary you undertook graduate studies at the Ecumenical Patriarchate’s Seminary of Halki. What did your studies focus on at Halki and later at the University of Thessaloniki, where you earned a second master’s degree?

METROPOLITAN: My studies at Halki and at Thessaloniki were a great opportunity to further my theological understanding of the Gospel and the practical application of Christ’s message within the context of the Church.

O.O: How would you describe your Halki experience and the importance to Orthodoxy of reopening the School?

METROPOLITAN: I am very grateful that I attended Halki because it afforded me the opportunity to live and study in proximity to our Ecumenical Patriarchate.

The long-delayed re-opening of the Theological School at Halki is of great importance to the stability of the Ecumenical Patriarchate. It is essential for the Mother Church to have the ability to educate and train its leadership. Renewed tensions in the Middle East, geo-political pressures, and religious intolerance have kept the doors of this historic school closed, but it is my hope that they will soon be opened once again.

O.O: You served with distinction in the U.S. Marine Corps in Korea. What did you learn about service and leadership from that experience that has illuminated your life as a member and leader of the Church, especially the challenges you faced as chancellor of both the Diocese of Chicago and the Archdiocese, and as Metropolitan of Denver?

METROPOLITAN: My service in the U.S. Marines was a real blessing to me because I have always desired to see society, small and great, exist peacefully and orderly. Witnessing strong leaders and the harmonious order in the Marines was a powerful example in my life as to how an advanced civilization should function. In some ways, our hierarchical structure functions similarly to the military and there are certainly lessons that are applicable to the administration of the Church.

O.O: What are some of the important ministries of your Metropolis, such as Camp Emmanuel?

METROPOLITAN: Obviously the most important ministries have to do with living our Apostolic faith. It is important for all Orthodox Christians to understand that our Christianity is not lived in a bubble, or just on Sunday mornings, but rather that our faith and experience of Jesus Christ permeates every aspect of our lives. Each year at Camp Emmanuel I witness a beautiful combination of faith and fun in the same program. It is an important chance for our youth to step away from the daily stresses of school, family, and social life to focus intently on Christ in a dedicated Christian environment.

Likewise, the annual St. John Chrysostom Oratorical Festival has had a wonderful impact on young people of the Metropolis of Denver. It is truly inspiring to witness them expressing their Orthodox Christian faith in their own words, and I must admit that I’ve gotten many good sermon ideas from their presentations.

O.O: What are your special challenges, problems, in presiding over the largest Metropolis in area and its farflung parishes?

METROPOLITAN: Two specific challenges come immediately to mind and they are distances and demographics. The Metropolis of Denver consists of 50 parishes spread out over 12 entire states and a portion of two other states. This is 1.3 million square miles, stretching from the Canadian border to the Mexican border; and Utah to western Missouri. This reality means that only a handful of parishes are within a reasonable driving distance, so much of my travel for pastoral visits is by airplane. Given these vast distances, the establishing and maintaining relationships between parishes and parishioners is a great challenge.

O.O: Your first assignment as a priest was assistant pastor at Holy Trinity Church in Salt Lake City, and years later becoming Bishop of Denver. How did you feel about returning to that part of the country?

METROPOLITAN: I feel very fortunate to have returned to the mountain, plains, and southwestern states. My time in Salt Lake City in a way prepared me for my later ministry as the hierarch of the Metropolis of Denver. There is a certain isolation that is felt among some clergy and laity in parishes which are not in close proximity to others. This of course is an added challenge to the regular responsibilities of parish ministry. For this reason, I have made it a priority to stress communication, connectedness, and relationships among the various parishes of the Metropolis.

O.O: How do you communicate your vision for the Metropolis to the clergy and what was discussed at the recent annual pre-lenten clergy retreat?

METROPOLITAN: Beginning with our Metropolis Clergy/Laity Assembly in 2011, a focus has been placed on the health and growth of the parishes of the Metropolis of Denver.

Over the past eight years we have used various means of communicating the importance of not only preserving our faith and heritage, but sharing them with our local communities and our society in general. Clergy-laity assemblies, clergy syndesmos retreats, webinars, and written communications have all been utilized to convey this important message.