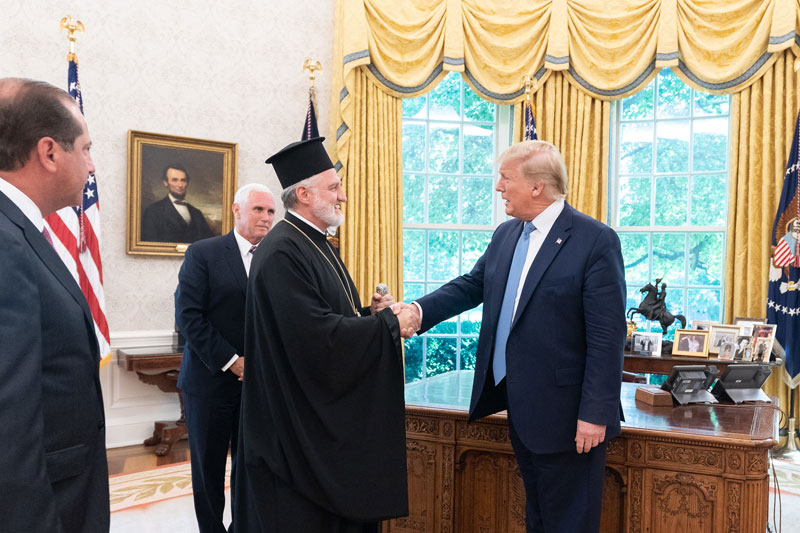 WASHINGTON – His Eminence Archbishop Elpidophoros of America met yesterday, July 16, 2019 with President Donald Trump at the White House Oval Office. The meeting was attended by Vice President Mike Pence and the Secretary of Health and Human Services Alex Azar.

The meeting was very cordial, and the Archbishop had the opportunity to thank the President for a) sending his representative at the enthronement ceremony; b) his warm congratulatory letter on assuming his new position; c) his sincere support to the sacred institution of the Ecumenical Patriarchate, and d) the constantly demonstrated sensitivity of the President to the protection of Christians throughout the world.

The President indicated particular interest for the Orthodox Church and promised continued support for the activities and the work of the Greek Orthodox Archdiocese of America.

The Archbishop accompanied by the Rev. Protopresbyter of the Ecumenical Patriarchate Alexander Karloutsos, Vicar General of the Archdiocese, is in Washington to participate in the annual Ministerial to Advance Religious Freedom, organized for a second year under the direction of U.S. Ambassador-at-large for Religious Freedom Samuel Brownback, who is working under the aegis of the State Department.

Later in the day, His Eminence attended a formal dinner in his honor hosted by the Order of Saint Andrew, Archons of the Ecumenical Patriarchate under the leadership of Dr. Anthony Limberakis and the high presence of His Beatitude Patriarch Theophilos of Jerusalem.

Today, there is a scheduled address by Archbishop Epidophoros on Protecting Vulnerable Religious Minorities in Conflict and Crisis Settings and his meeting with Secretary of State Mike Pompeo.