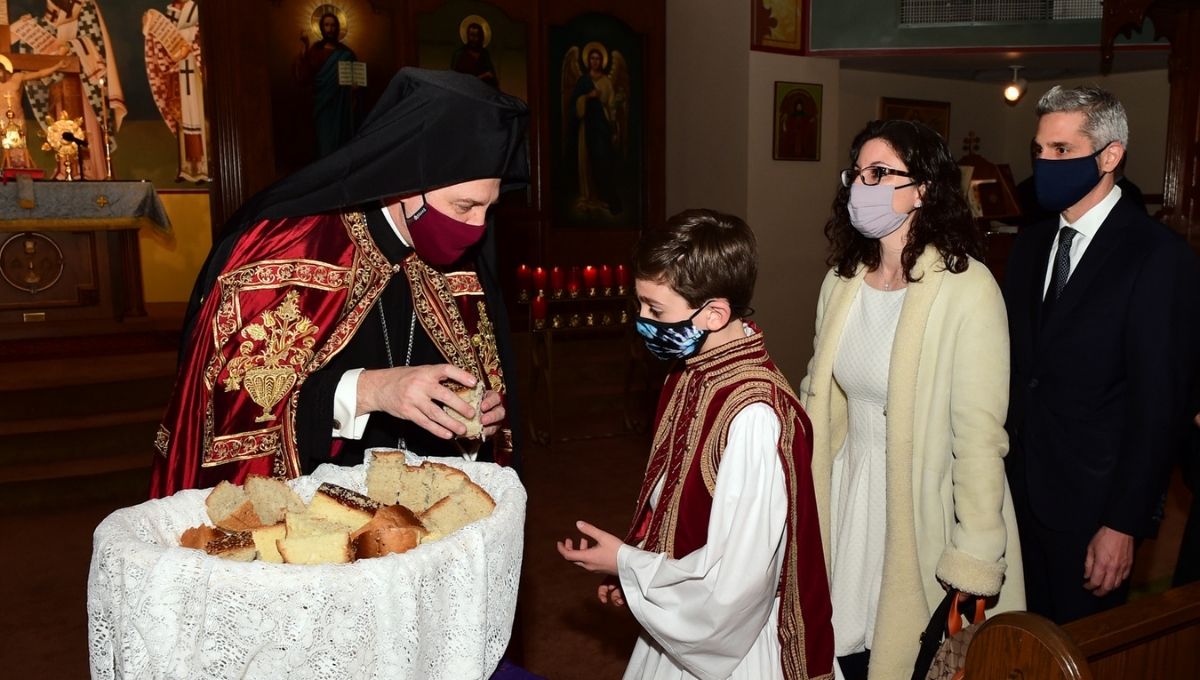 Homily at the Great Vespers of the Feast of the Annunciation

Greek Orthodox Church of the Annunciation

My beloved Sisters and Brothers in Christ,

“To everything there is a season, and a time to every purpose under Heaven.”[*]

For the Virgin Mary, that “time to every purpose” was the sixth month of her cousin Elizabeth’s most unexpected pregnancy. As it says in the Gospel of Luke, and as we chanted this evening:

For the Heroes of 1821, the time to their purpose was the very Day of the Annunciation, the 25th of March.

A day that declares freedom for every human being.

It was not lost on the Immortal Heroes of 1821, that the day they chose to raise their Λάβαρον on high, was the day that announced to the world that God has come to save us all.

They raised their ensign like Saint Constantine before the Battle of the Milvian Bridge. He placed the Chi-Rho on the top of every imperial standard, and so proclaimed that he and his house would serve the Lord of Hosts.[†] (Let it never be forgotten that this day, in the year 312, was October 28, another day of courage and self-determination for Greece!)

The Heroes of 1821 raised the Λάβαρον in a declaration of their independence and choice to live as free men and free women.

A choice not to go gently into any nightfall that might swallow their very identity as Greeks.

But there was much struggle before them, as the Greece of 1821 was little different from the Palestine of the Virgin Mary.

At the very moment that the Archangel Gabriel arrived at the House of the Virgin in Nazareth – to speak to her the Glad Tidings of the redemption of humanity – she was a young woman of little means and few resources.

Our Panagia had a noble past that reached back thousands of years, but the Israel of her time was occupied by a foreign Empire.

The Greece of 1821 had a civilization that stretched back millennia, but another Empire occupied her hallowed lands.

The Virgin Mary was just one human being, but her assent to God changed the course of history for every human being.

The Heroes of ’21 were few in number, but their determination would change the course of Greece, and give to subsequent generations the free Republic that we all enjoy today.

My fellow Patriots and Philhellene Friends:

It is no accident that the Feast of the Annunciation is also the Κεφάλιον of the Greek Revolution. They are inextricably linked by aspiration, and by blood.

The Divine Blood that curdled in the womb[‡] of the Virgin on day of the Incarnation was destined to be shed on the Cross for the life of the world. The Precious Blood of the Lord was offered up for all, even if every person has not yet accepted this sacrifice of Divine Love.

And those who died for the liberation of Greece, did so in the knowledge that they might not live to see the fruits of their labors, which were watered by their own blood. But they knew in their hearts that their sacrifice was not in vain.

Today, Brothers and Sisters, is truly a day of remembrance and rejoicing.

Remembering how great was the love of God, that “He spared not His own Son.”[§]

Remembering what precious sacrifices have been laid by our ancestors “upon the altar of freedom.” [**]

But it is also a day of rejoicing. Rejoicing in the mercy and love of God that transformed a young woman’s heart to become “More Spacious than the Heavens,” Πλατυτέρα τῶν Οὐρανῶν.

Therefore, on this Feast of the Incarnation of the Θεάνθρωπος – the God-Man Jesus Christ – let us give thanks with tears of memory and gladness.

Let us remember the Holy Theotokos, who inaugurated our salvation by offering her very body to God.

Let us remember the Heroes of ’21, who rejected tyranny and by their blood restored Greece to Her democratic ideal.

And let us be glad in the knowledge of the Mother of God’s protection of the Greek People, and the freedom we continue to enjoy by the sacrifice of those who came before us, and who valiantly restored the Glory that was, is, and ever shall be, Greece!