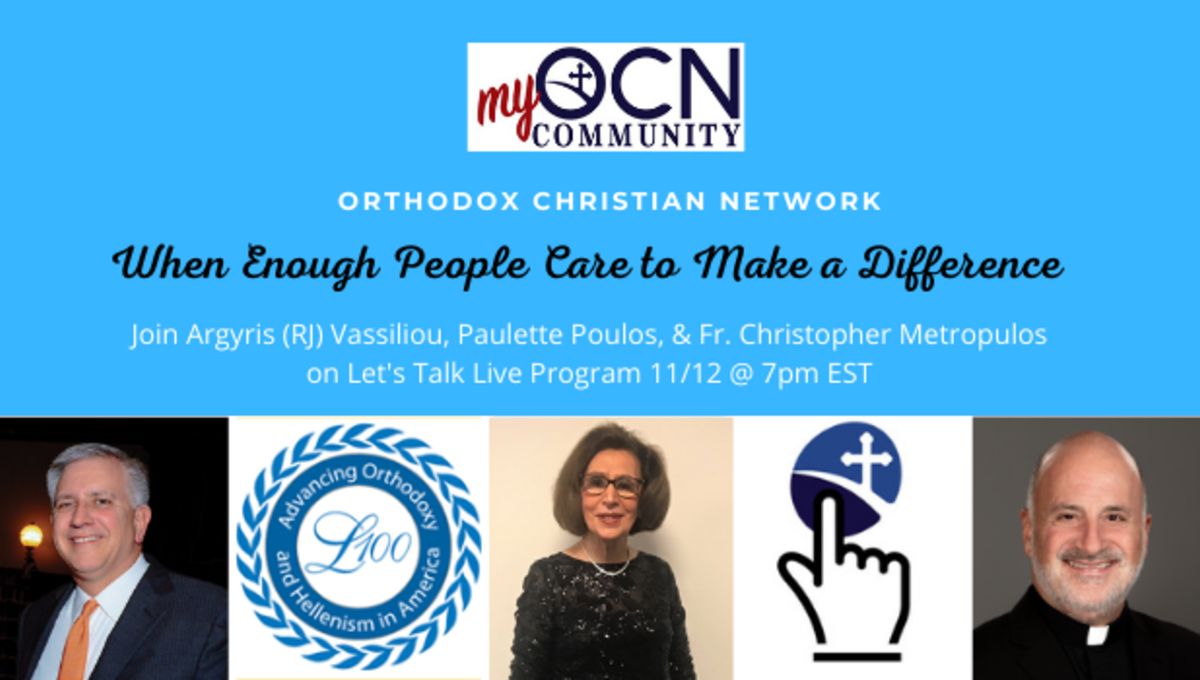 The Gathering will also be live-streamed on our Facebook page. Join us and thousands online for prayers and discussion. Families are welcome, and you will have the opportunity to ask questions. If you would like to attend, please register HERE to receive sign-in instructions.

Argyris (RJ) Vassiliou is currently the President of two family-owned businesses, Acme Pallet Company, Inc., an industrial engineering concern, based in New York City, and Di-Cor Industries, Inc., a specialty structural steel fabrication company, located in Bristol, CT.  He was educated at The Cooper Union for the Advancement of Science and Art, receiving a B.C.E. degree in 1989, and at Princeton University, receiving a M.S. degree in 1991.  RJ serves as the Chairman of the Archbishop Iakovos Leadership 100 Endowment Fund, is an Executive Committee board member of Anatolia College in Thessaloniki, Greece and sits on the President’s Advisory Council of Mitchell College and the Parents Council of Skidmore College.  He also serves on the Advisory Council of the Princeton University Art Museum, and most recently joined the Tang Museum National Advisory Council.  Fluent in Greek, he is a recipient of the Ellis Island Medal of Honor and has been recognized, along with his wife, with the Bruce Museum Icon in the Arts award.  Married to the former Ann Pappajohn, they have two children, Nicholas and Alexandra, and attend the Church of the Archangels in Stamford, CT.

Paulette Poulos is Executive Director of the Archbishop Iakovos Leadership 100 Fund, Inc., a leading charitable membership organization, whose purpose is to support the Greek Orthodox Church in America and advance Orthodoxy and Hellenism. She has held the position since 2005, previously serving as Director of Development. Her career spans some 55 years of executive leadership, financial development, philanthropy, Church and community service.

Beginning in 1965 with the Department of Laity of the Greek Orthodox Archdiocese of America, she moved rapidly to become Associate Director of Youth Ministry in 1970, Director of LOGOS, one of the main stewardship agencies of the Church in 1972, and Administrator for the late Archbishop Iakovos serving from 1984 to 2005 upon his retirement.

Ms. Poulos is credited with having raised significant funds for the Greek Orthodox Church of America, Hellenic College/Holy Cross School of Theology, the Archbishop Iakovos Library and Learning Resource Center and Leadership 100.

Her expertise in administration, development, philanthropy, public speaking and membership cultivation in the United States and worldwide earned her recognition and honors from numerous organizations, including the 2006 Honoree of Hellenic American Neighborhood Action Committee (HANAC); the 2008 Commendation by the City of New York, Office of the Comptroller; 2008 Hellenic College/Holy Cross School of Theology Women’s Vocational Ministry Award; and the 2014 Hellenic Heritage National Public Service Award  presented by the American Hellenic Institute.

Ms. Poulos has served on numerous committees and boards including the Governing Board of the National Council of Churches of Christ, National Committee for the Archbishop Iakovos Library and Resource Center at Hellenic College/Holy Cross School of Theology, Brookline, Massachusetts and the Archdiocese National Youth Commission. She is an active member in the Greek Orthodox Community and is a member of the following parishes: Archdiocesan Cathedral of the Holy Trinity, New York City, Three Hierarchs, Brooklyn, New York, and St. Fanourios, Elizabeth, New Jersey.