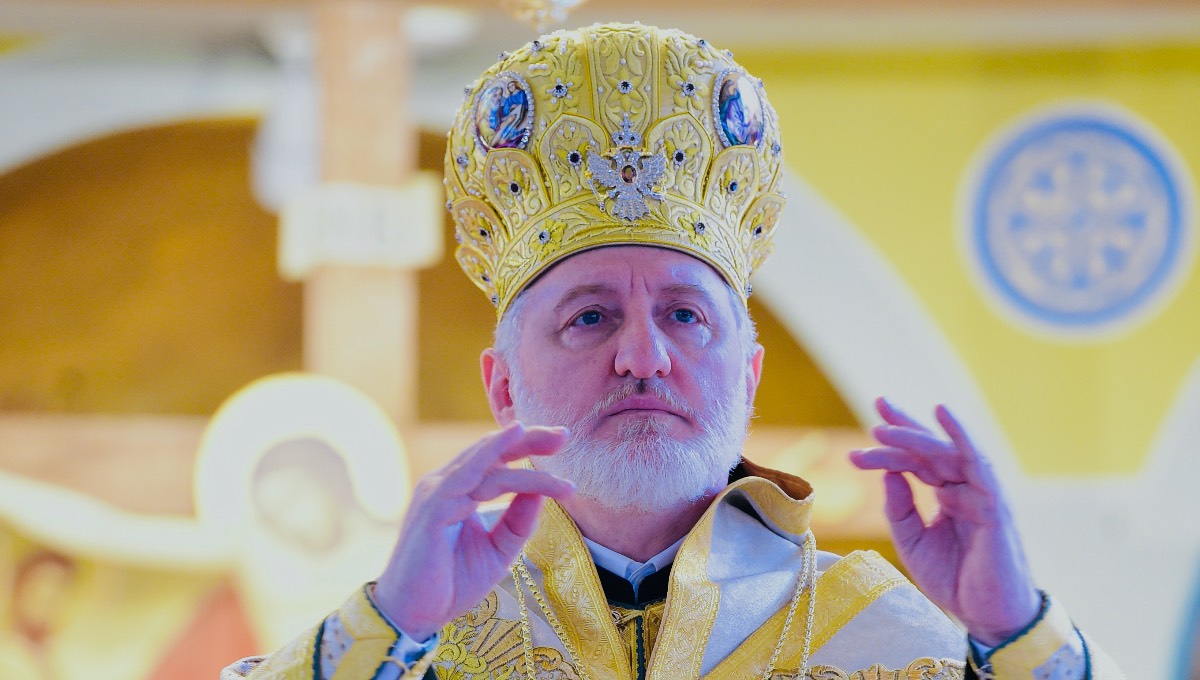 Homily for the Seventh Sunday of Matthew and Saint Paraskevi

It is a joy to be with you today at this Temple and Shrine dedicated to the Great Virgin-Martyr Paraskevi, and especially on her feastday. We assemble as best we can in these days, when the pandemic has yet to abate in our land, and you all honor the Saint with your presence and prayerfulness today.

We honor Saint Paraskevi as a Martyr who bore witness to Christ through unimaginable suffering.

We honor Saint Paraskevi as a Healer, particularly of the eyes. And by the liturgical rhythm of the Church, we read of the healing of the two blind men by our Lord Jesus Christ in today’s Gospel.

We honor Saint Paraskevi, who was given this name by her pious parents, to give glory to God for the Friday, the Holy and Great Friday, (in Greek, Παρασκευή), the day on which our Lord Jesus Christ gave up His life, for the life of the world. But Παρασκευή is not only the Day of Redemption upon the Cross of Golgotha, it is also the Sixth Day of Creation, when our humanity was created, according to the Book of  Genesis.[1]

As the Sixth Day of Creation, it is the Day of Preparation for the reign of humankind as the pinnacle of creation. As the Fathers teach, the human being was formed by God on the last Day of the Creation. For the entire world and Paradise was made like a palace, in which the human person would reign as a monarch, in the image of God’s rule of the universe.

But this Sixth Day proved to be the day of our downfall. We were created for immortality, but through the love of only ourselves, which in Greek is φιλαυτία, we deserted our divine calling, and we became subject to sin and death.

Thus, our day of preparation had to be drawn out over the millennia, and our salvation readied in the fullness of time.[2] The entire Old Testament, with all its laws and regulations, exists to bring about the pure and Holy Virgin. For she became the chariot that would carry our Champion, the Lord Jesus Christ. This was the preparation of the Gospel.

Then, on the Sixth Day of the Week – of Holy Week, the Lord took our humanity, which was given up to death unwillingly by disobedience and pride. He took our human nature to the Cross to willingly die for each and every one of us. And by that willing death on the day of Preparation, he prepared for us to enter Paradise, as he promised the Thief who was crucified at His side.[3]

But even His death on the Cross was a preparation, a preparation for His Divine Rest on the Holy Great Sabbath. For this is the Seventh Day of the new creation, when the Lord Jesus Christ rested from His labors to remake us in His image, according to His likeness.

It was a Divine rest, a sleep in death from which the Lord arose on the First Day of the Week like a lion roused from slumber.[4] He arose and by His Glorious Resurrection He conquered once and for all sin, and hades, and death. He shattered the gates of hell and brought up from the grave all who had been waiting for redemption from ages past.

This moment of the Anastasis is nowhere more spiritually and more magnificently portrayed than at the Church of Chora. You all know the image, the Risen Lord aglow with light divine lifting Adam and Eve up out their tombs, as He tramples down death. But this Sacred Τόπος, like our Hagia Sopha, has been seized and converted to an alien purpose, which I shall not name here out of respect and honor for these sacred Τόποι of our Holy Orthodox Faith.

Therefore, I ask each and every one of you, as we honor your Saint Παρασκευή: how will you prepare yourself?

How will you prepare to receive the great gift of salvation and eternal life, which is ever offered in our Churches through the Holy Eucharist?

How will you prepare your life to ultimately meet your death? For if the Lord and Creator of Life Himself submitted unto death, none of us can escape this passage to the next and everlasting world.

And how will you prepare to live your life as an Orthodox Christian, who knows their faith and is aware of, and alive to, the vital issues of the day?

We all bear the responsibility, the privilege, to live our lives as best we can, so that at the moment we shall all eventually face, we may hear the words: “Well done, good and faithful servant!”[5]

My beloved Christians, as we honor your Matronal Saint, the Holy Παρασκευή, I pray that through her inspired prayers, she may be the channel of divine grace to each and every one of you and your families. May you all receive her blessing and strength, and be preparedin your life to be the Orthodox Christian that God has called you to be.