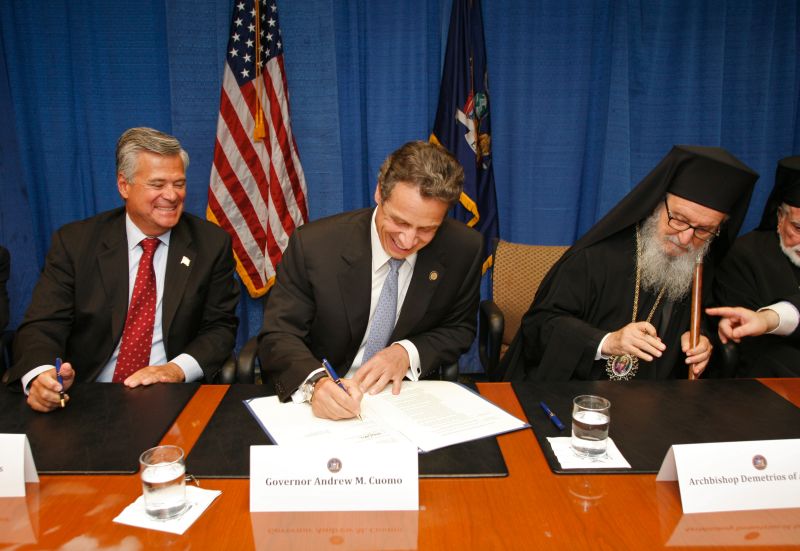 NEW YORK – The Greek Orthodox Archdiocese of America announces today an agreement with the Port Authority of New York and New Jersey regarding the rebuilding of St. Nicholas Greek Orthodox Church, which was destroyed in the terrorist attacks of September 11, 2001.

New York Governor Andrew Cuomo invited Archbishop Demetrios and the Hierarchs of the Holy Eparchial Synod of the Greek Orthodox Archdiocese of America, together with leadership of the St. Nicholas Parish and the Archdiocesan Council to his New York City office for the official signing of the agreement by Archdiocesan Council Vice-Chairman Michael Jaharis, St. Nicholas Parish President John Couloukoundis and Port Authority Executive Director Chris Ward. Archbishop Demetrios, Governor Cuomo and NYS Senate Majority Leader Dean Skelos signed as the formal witnesses to the agreement.

Archbishop Demetrios expressed particular praise for Governor Cuomo and said, “We are grateful to our esteemed Governor and precious friend Andrew Cuomo for bringing to reality the dream we have nourished for ten long years. St. Nicholas Church, rising again with the help of God at Ground Zero - where it stood spiritually important for 85 years, is an affirmation of the significance of religious freedom and experience for all New Yorkers and all Americans. The covenant stands firm. We will again light many candles in the new St. Nicholas Church and remember those who were lost to us, and those heroes who so nobly sacrificed their lives. Our pledge is to be a witness for all New Yorkers, that freedom of conscience and the fundamental human right of free religious expression will always shine forth in the resurrected St. Nicholas Church.” The Archbishop also expressed deep appreciation to Michael Jaharis and Dennis Mehiel and the other members of the joint committee who had labored so diligently to accomplish this historic agreement.

Governor Andrew M. Cuomo said, “We lost St. Nicholas Church in the destruction of September 11 and for too long its future has been uncertain. Rebuilding St. Nicholas Church, with a nondenominational bereavement center, is not just good news for the Greek Orthodox community, but for all New Yorkers. With this agreement, we are continuing New York’s collective healing, restoration, and resurgence. Now we are finally returning this treasured place of reflection to where it belongs.”

According to the Port Authority Press Release, “The agreement … permits the rebuilding of the Church with a nondenominational bereavement center at the east end of Liberty Park, at 130 Liberty Street. The agreement follows a four-month independent engineering study commissioned by the Port Authority and the Archdiocese, which found that the Church could be built on the site with minor modifications to the original plan and with no impact on the World Trade Center construction schedule.”