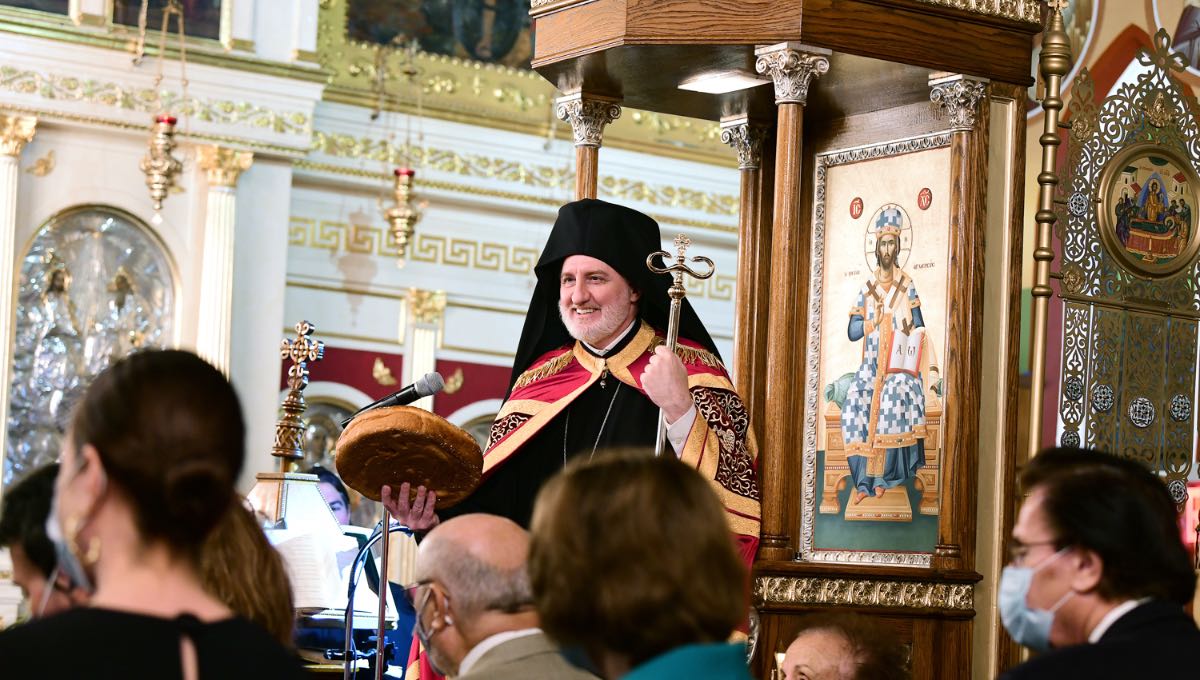 What a strange and marvelous wonder! The well-spring of life is laid in a grave, and the tomb becomes a ladder to Heaven. [*]

Indeed, what a miracle we witness here tonight, as we travel through this service of Vespers to Gethsemane, and we gather with the Disciples from afar – ἐκ περάτων – as we have chanted these many days of the Paraklesis services.

But now we have arrived at the Feast itself, and I am deeply gratified to be here at Κοίμησις τῆς Θεοτόκου in Brooklyn, for this annual celebration of the life that shines forth from death. In these days of sickness and struggle, we all need this affirmation, and how beautiful it is that your parish is adorned as a garden, as a spiritual garden fragrant with devotion and Orthodox piety.

For the Garden of Gethsemane, which proved for her Son and our Lord a place of prayer turned into a place of agony and betrayal, has been shown to be a garden of virtue and peacefulness once again. The Apostles bear the Mother’s earthly remains to a tomb which becomes a ladder to Heaven!

As you all know, the Theotokos reposed on Mt. Zion, near to the place where the Mystical Supper was held in the Upper Room. But she chose herself to be buried at the base of the Mount of Olives, near to her own parents, Saints Joachim and Anna, the grandparents of the Lord.

By being buried at the base of the Mount of Olives, she plants herself as a foundation stone upon which the Mountain rises, until it finds, at its peak, the place where the Lord ascended into Heaven.

Thus, she is the foot, the first rung on the Ladder to Heaven of which Jacob dreamed, as we read from the Book of Genesis tonight:

And Jacob dreamed, and behold, a ladder was set up on the earth, and the top of it reached to Heaven: and behold, the angels of God ascending and descending on it.[†]

She is the Ladder that the Lord promised his Disciples when He said to them at their first calling:

“Amen, amen, I say to you. From this moment on you will behold the Heavens open and the Angels of God ascending and descending upon the Son of Man!”[‡]

For the humanity of the Mother of God forms the substance of the Son of Man, Who came to save us from sin and from death. From her Virgin womb, the Lord of All Creation took flesh, and through that flesh made a way for us to return to God. It was His flesh that hung upon the Cross, suspended between Heaven and Earth, showing that He was Ladder of Divine Ascent.

And now, in her Dormition, the Virgin seals her part in the Divine Drama of our salvation, by anchoring the Ladder of Divine Ascent in her tomb. Thus we chant:

The tomb has become a ladder to Heaven!

For in falling asleep and enduring death – and her death was as peaceful as her Son’s was violent – the Mother of God becomes for us the model of our transition from this life to the next. And more than this, because after three days in the Tomb, the Lord receives her body into Heaven in a foretaste of our own Resurrection, she becomes the model of transformation from earthly to everlasting. We no longer have to fear our mortality, because we are destined for immortality.

Therefore, my beloved Christians, let us embrace our Παναγία tonight with love and devotion! Let us recognize in her, our first step to ascending the Ladder of Divine Ascent. The Lord grew within her ever-virgin womb for nine months and was born into the world. Through our Baptism, through our Chrismation, and through every Divine Eucharist, the Lord grows within our souls, yearning to be manifested in the world through our love, our compassion, our mercy, and our φιλανθρωπία.

What step of devotion and love are you prepared to take tonight?

Brothers and sisters, let us, like the Prophet Jacob awaken from our sleep, from the slumber of sin and sloth that can overwhelm us.

When Jacob awoke from that dream of the Heavenly Ladder, he was shaken with holy awe and said:

“This none other but the house of God, and this is the gate of heaven.”[§]

Through the intercessions of the Holy Theotokos, whose Holy Dormition we embrace with love, may we know the holiness of this and every house of God, and may we be counted worthy to pass through the gate of Heaven and ascend by the Ladder made for our sake and for the sake of the whole world.

[*] Great Vespers of the Feast, first of the stichera.