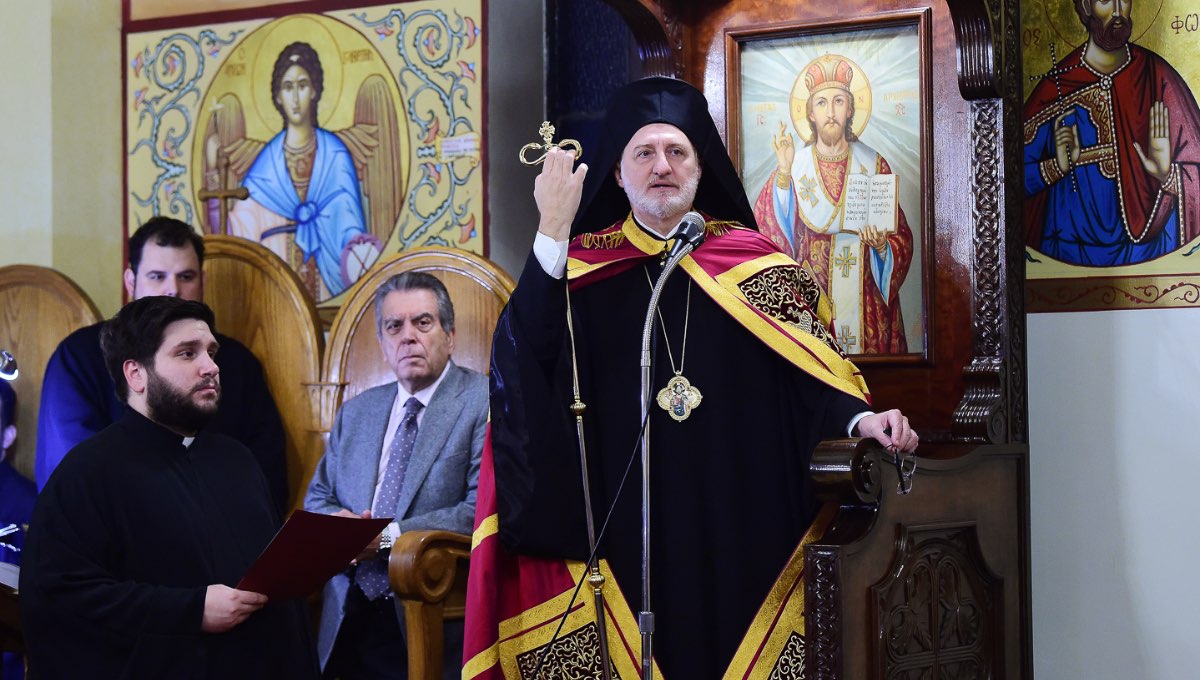 Tonight we have gathered in honor of your Heavenly Patron, the God-bearing Father Gerasimos, who hailed from Trikala in Peloponnesos. Before the Saint came to the island paradise of Cephalonia, where his relics are enshrined, he struggled mightily for Christ throughout the Orthodox world – in Constantinople, Mount Athos, Jerusalem, Mount Sinai, the deserts of Egypt, Antioch, Damascus, Zakynthos, and finally to the “New Jerusalem” he founded in Cephalonia and in his miraculous ministry.

This great monastic is called both Ὅσιος and Θεοφόρος – Righteous and God-bearer – because his way of life was truly one of righteousness, and he was one who carried God in every aspect of his life. Thus, he is an exemplar to us all, because he fulfilled in his life the famous exhortation of the Prophet: “to do justly, love mercy, and walk humbly with God.”[*] Can you imagine what your world would be like – what the whole world would be like, if each and every person practiced these three most simple but difficult tasks, as Saint Gerasimos did?

When we deal justly with one another – in every aspect of our lives – we demonstrate the equanimity of God, Who “makes His sun to shine on the evil and the good, and sends the rain on the righteous and unrighteous.” [†] We become people of fairness and goodness, and those qualities spread out in the community we inhabit, because the blessing of God goes before us.

When we love mercy, we transform ourselves from the image of God into His likeness. We become living icons of God – for the mercy of God is the principle that saves the world.

And when we walk humbly with God, we ourselves become Θεοφόροι, God-bearers,  in whom others can find hope and solace, as we minister to those around us. These three qualities – righteousness, mercy and humility – draw us closer to God, while they convey God’s love to everyone with whom we connect, even in the most simple and mundane ways.

This is how Saint Gerasimos lived. This is why the demons flee from him, and why we are so attracted to his sanctity.

As we chant in his hymn:

“Let us praise divine Gerasimos, the protector and champion of Orthodoxy, an angel in the flesh and newly-appeared God-bearing wonderworker. Made worthy by God to receive ever-flowing grace of healing, he strengthens the sick and heals the demon possessed. Wherefore healings pour forth for those that honor him.” [‡]

He is truly an “angel in the flesh,” for he fulfilled the highest calling of the monastic life.

He is “newly-appeared,” for he lived not in the early days of the Desert Fathers but in the sixteenth century. His life demonstrates that the witness of the Fathers belongs to every generation.

And Saint Gerasimos is a great healer – both of bodies and of souls. His incorrupt relics are a manifestation of the healing grace of the Holy Spirit that “pours forth,” as the Apolytikion says, through the mercy of God and the sanctity of the Holy One.

Finally, my beloved Christians, we, who honor God’s Saint, are the ones who receive the blessings. We extol Saint Gerasimos tonight not because he needs our praises, but because we need his prayers. His intercessions before the throne of God will help us through this pandemic, and assist us in every hour of our need.

He is, as the Kontakion says, the “boast of Orthodoxy,” but he is just as much the boast of Cephalonia too. Let us hold him dear, then, in mind and heart as our fervent intercessor before the Lord, and let us celebrate:

“Today the Island of Cephalonia, calls upon multitudes of Orthodox, to sing praises of thanksgiving to divine Gerasimos the great, extolling the one who is newly-appeared, revealed as the boast of Orthodoxy and its defender and champion.” [§]

[‡] Apolytikion of the Saint.

[§] Kontakion of the Saint.