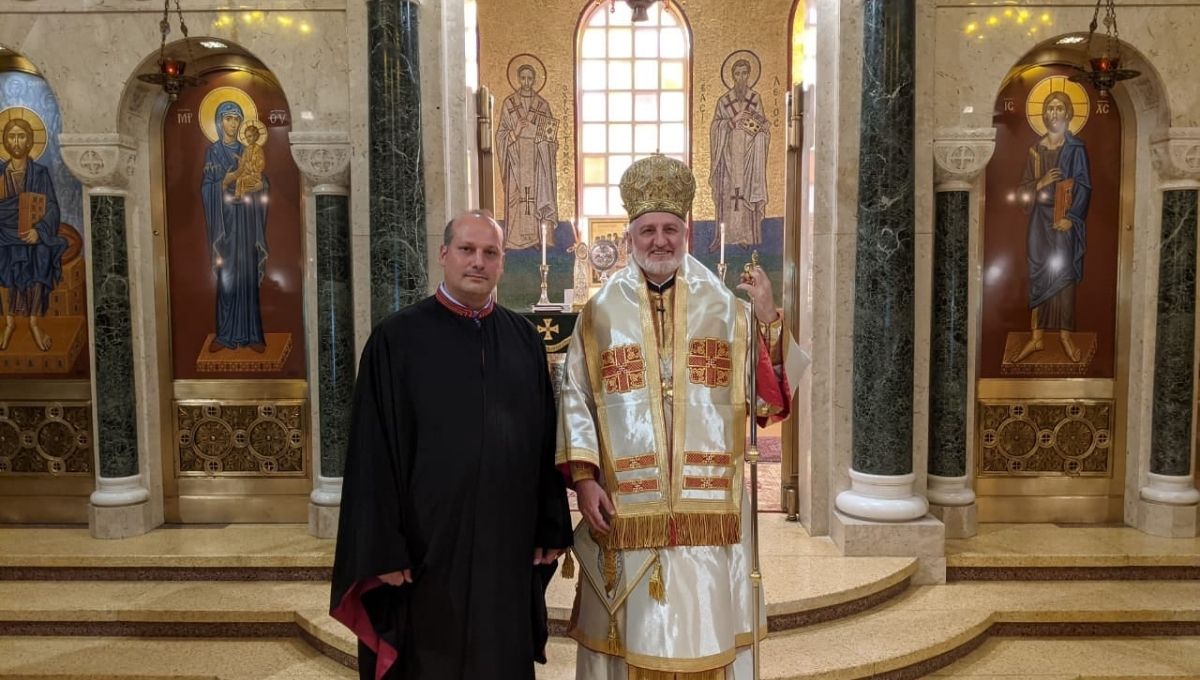 On Saturday, June 26, 2021, His Eminence Archbishop Elpidophoros of America elevated Mr. Georgios Theodoridis, Master Chanter of Saint Sophia Cathedral in Washington, DC, to the rank of Archon Mousikodidaskalos (Music Instructor) of the Greek Orthodox Archdiocese of America in recognition of his efforts and contributions toward the teaching and promotion of Byzantine Music in Washington, DC, over the past decade. Together with this special honor, His Eminence appointed Archon Georgios Theodoridis as the new Director of the Archdiocesan School of Byzantine Music, which he previously served in the capacity of music instructor.

Archon Theodoridis expressed his deep gratitude and appreciation for the singular honor that was bestowed upon him with the following words:

“The magnitude of the high honor of this offikion, as well as the seriousness of the position of the Director of the School of Byzantine Music can only be overshadowed by the sea of Archbishop Elpidophoros’ archpaternal love. I am most honored to join in His Eminence’s vision, and together with the gracious assistance of Leadership 100, I hope that we will achieve the realization of this noble goal, which is nothing less than the enrichment of our Sacred Archdiocese with capable, well-trained chanters, who will adorn our divine services with the glorious raiment of our precious Orthodox hymnology, so that the Psaltic Art — the Byzantine Music Tradition of our Church — may grow and flourish here in America for the spiritual benefit and edification of future generations of faithful, always unto the glory of God Almighty.”

The Archdiocesan School of Byzantine Music was established in 2010 as a response to the ever-growing needs of the Archdiocese, its clergy and its parishes, with the aim of formally teaching Byzantine Music to young men and women, who wish to one day offer their talent and services to the Church as trained ecclesiastical musicians.

A brief biography of Archon Theodoridis follows below.

Archon Georgios Theodoridis was born in Böblingen, Germany. At the age of 13, he moved to Greece, where he graduated from the Ecclesiastical High School of Tinos and was exposed to Byzantine music. Upon graduation, he moved to Athens, where he studied Byzantine Music theory. He holds an honors degree in Byzantine Music, as well as the Diploma of Music Teacher from the Conservatory of Egaleo in Athens, Greece. Archon Theodoridis has been invited to share his expertise on Byzantine Music, either as a guest speaker or guest performer, at several universities and other locations that include: Hellenic College and Holy Cross Greek Orthodox School of Theology, MA; the Catholic University of America, DC; the American University, DC; Georgetown University, DC; and the Metropolitan Museum of Arts, NY.