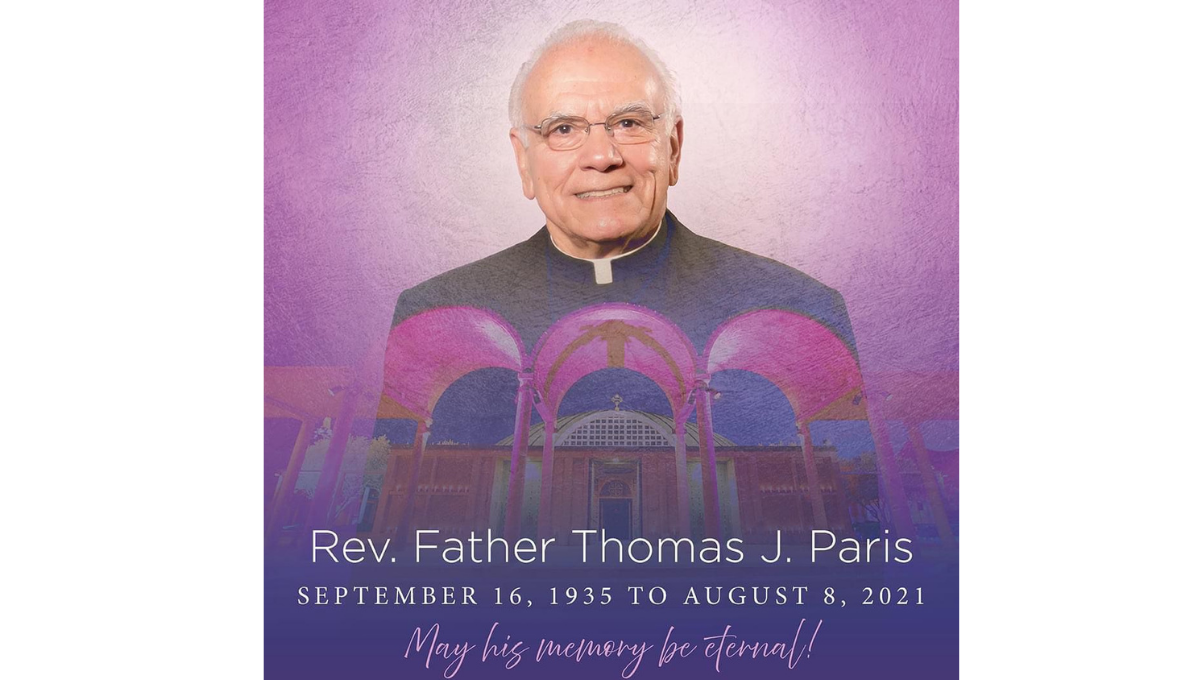 Reverend Father Thomas J. Paris, Dean Emeritus of the Ascension Greek Orthodox Cathedral in Oakland,  passed away on August 8, 2021 following a long battle with cancer. Fr. Paris, the son of James and Grace  Paris, was born and raised in Chicago, Illinois on September 16, 1935. He served as president of his parish  youth group and was the captain of the altar boys. He earned the rank of “life scout” and served as an  assistant scoutmaster. He received the Phi Beta Kappa and B’nai B’rith Youth of the Year Awards and was  selected for the Chicago Tribune all-city football team.

He graduated from Chicago’s Amundsen High School in 1953. In 1959, he graduated from Holy Cross  School of Theology in Brookline, Massachusetts, where he was class president and newspaper and yearbook editor. After graduation he married Vaso Katinas of St. Louis, Missouri and traveled with her to  Greece on a honeymoon that lasted two years. There he completed his Licentiate of Theology with  honors at the Theological School of the University of Athens and the happy couple was blessed with the  birth of their son, James.

Fr. Paris was ordained as a deacon in Athens in August of 1961 and as a priest in Chicago that December.  He was assigned to the St. Paul Greek Orthodox Church in Savannah, Georgia where he served almost 10  years. Under his leadership they paid off the church mortgage and purchased five nearby homes for  expansion. He was president of the Family Counseling Center and Travelers Aid Society and the Chatham  Clergy Conference, the city’s first inter-racial clergy body. He played an important role in the peaceful  integration of Savannah.

In August of 1971, Fr. Tom, Presbytera Vaso, and their five children arrived in Oakland, California where he  lived and served the Greek Orthodox Cathedral of the Ascension for the next 50 years. Under his  leadership the parish was elevated to Cathedral status in 1992 and hosted four Patriarchs as well as two  heads of state. The parish was able to liquidate its mortgage and build a large multi-purpose Community  Center. The last edition to the master plan for which fundraising is ongoing is the completed parking  pavilion and the chapel which still needs to be completed. During his tenure endowment and scholarship  funds were established including one in his honor. The parish Summer Camp was founded in 1972. It continues to be a vibrant ministry and has created many bonds and lasting friendships.

members. Fr. Paris helped organize the immensely popular Festival of Greece (which was later renamed  the Oakland Greek Festival) along with the highly successful weekly Senior Center Program. He was a  champion of the Ascension Cathedral Golf Tournament and took it to a new level. He is recognized  annually by “The Father Tom Paris ‘Halfway to Heaven’ Long Drive Contest.” He was a charter member of  the Interreligious Council of Oakland which responded so effectively to help alleviate the suffering caused  by the Loma Prieta Earthquake and the Oakland Hills Firestorm.

In service to the Greek Orthodox Metropolis of San Francisco Fr. Paris served as Retreat Master, was  chairman of the Spiritual Renewal Committee and the Northern California Youth Organization. He also co founded and led the Senior Camp. He helped form the Northern California Chapter of the International  Orthodox Christian Charities. He helped raise $75,000 for Ethiopian famine relief and traveled to visit the  Patriarch of Ethiopia to deliver the funds at his own expense. He has served on the board of directors of  the Trinity Homes for fifteen years and as president for eight years. He served three years as president of  the Brotherhood of St. Nicholas for the St. Nicholas Ranch and Retreat Center. He was chairman of the  board and chaplain of the Patriarch Athenagoras Orthodox Institute in Berkeley.

On the national level he served on the Board of Directors of Hellenic College/Holy Cross Greek Orthodox  School of Theology. He was a member of the Archdiocesan Council, chairing the Clergy and Clergy Family  Committee. It inspired the establishment of a crisis hotline for clergy, their spouses and children providing  professional support to prevent clergy burnout and family distress. He also was elected to the National  Presbyters Council for eight years and served as its treasurer for four years. Following his retirement in  2009, he served the community of Prophet Elias Greek Orthodox Church in Santa Cruz, California for  several months until a permanent priest was appointed.

Fr. Tom will be remembered for his gift of encouragement, his joyful laugh and loving nature. He loved his  family and his flock and he was tireless in his efforts to serve others and to do what was pleasing to God.  He was present in times of joy and times of sorrow providing the love and support that was needed.

May his memory be eternal!

All services for Fr. Tom Paris will be held at the Ascension Greek Orthodox Cathedral, 4700 Lincoln Avenue  in the hills of Oakland, California and officiated by His Eminence Metropolitan Gerasimos of the Greek  Orthodox Metropolis of San Francisco. Viewing from 4:00pm and Trisagion at 6:00pm on Friday, August  13, 2021. Matins 7:00am followed by the Divine Liturgy. Funeral service at 10:00am on Friday, August 14,  2021. Interment immediately following at Mountain View Cemetery in Oakland, California.

In lieu of flowers, the family is grateful for your support of the Chapel completion to the Fr. Thomas J.  Paris Legacy Tribute in his memory. Donations may be offered online at ascensioncathedral.com/frtom or  mailed to Ascension Cathedral, 4700 Lincoln Avenue, Oakland, CA 94602. Checks should be made payable  to “Ascension Cathedral,” please note the “Fr. Paris Tribute.”