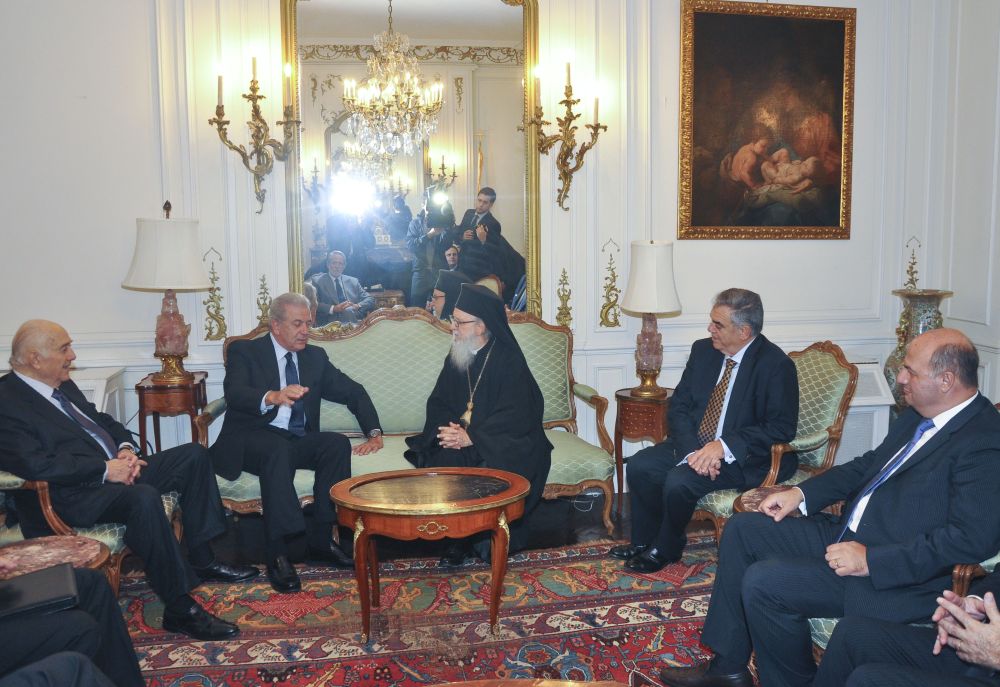 NEW YORK – His Eminence Archbishop Demetrios of America received today (9/26/2012) at the Archdiocese headquarters the visit of the Foreign Minister of Greece Mr. Dimitrios Avramopoulos together with his deputy ministers Mr. Dimitrios Kourkoulas, deputy for European affairs and Mr. Konstantinos Tsiaras, deputy for religious affairs and Hellenes abroad.

Participating in the meeting were also the Vice Chairman of the Archdiocesan Council Mr. Michael Jaharis and members of the Minister’s delegation including the new Ambassador of Greece to the U.S. Mr. Christos Panagopoulos, the permanent representative of Greece to the United Nations Ambassador Anastasis Mitsialis, the director of the minister’s political office Ambassador Dionisios Kodelas and the Consul General of Greece in New York Mr. George Iliopoulos.

The discussion included issues of concern to the Greek-American community and Hellenes abroad and issues relating to the economic crisis facing Greece.

In a statement to the Press following the meeting, Mr. Avramopoulos said he informed the Archbishop on the recent developments in Greece, the conditions facing the people there, and the efforts of the Greek government. He said that he felt deeply moved by the initiatives and actions of His Eminence and the Archdiocese in support of the Greek people, support which, as he said, is very valuable and necessary as the country tries to regain its credibility and get back on track.

In this statement that followed, Archbishop Demetrios said the attitude of respect for what we represent, Orthodoxy and Hellenism remains unchanged despite the crisis in Greece. He said that what we have as Greek-Orthodox, is lasting and has enduring qualities and added: “We want to reassure our brethren here and in Greece that we are doing everything possible and even more than what is possible to help Greece get through and out of this crisis. I have lived as a child, the German occupation, and we surpassed it, we experienced many difficulties and we have endured. Likewise we will overcome this present adversity, with the help and collaboration  of God.”