Print Those who attempt to challenge the privileges & rights of the First-Throned Church of Constantinople, are trying in vain
English Ελληνικά 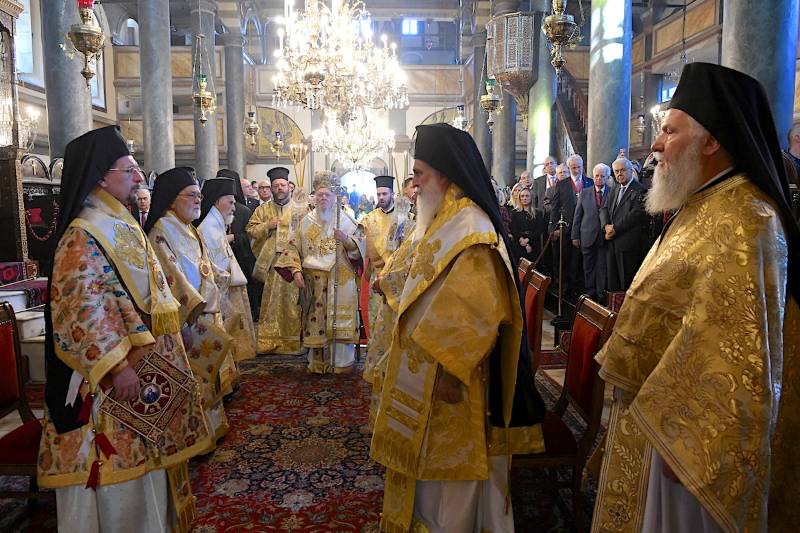 NEWS FROM THE ECUMENICAL PATRIARCHATE

Ecumenical Patriarch: Those who attempt to challenge
the privileges & rights of the First-Throned
Church of Constantinople, are trying in vain

Ecumenical Patriarch Bartholomew presided at the Divine Liturgy, assisted by the Metropolitans Germanos of Tranoupolis, Chrysostomos of Dodoni, Chrysostomos of Myra, Theoleptos of Iconion, and Athenagoras of Kydonia and Ierotheos of Lemnos.

Prior to the ordination, the Ecumenical Patriarch addressed patriarchal words to Bishop-elect Benjamin, for the building up and nurturing of the new ministry entrusted to him by the Mother Church.

“The Great Church today acquires in your person, Your Grace, a new Bishop, the flesh of the flesh of our City, the birthplace of the great Bosphorus. You have served for almost thirty years as a clergyman of the Ecumenical Throne, twelve years as a deacon, and seventeen as priest and Ecclesiarch. Modest, quiet, approachable, always willing to give, straightforward and with a lot of love for the common people, sympathetic and loving to all members of the Patriarchal Court and to all the workers here. All this was solemnly celebrated on the day of your election. The most striking feature of your ministry is that you remained uninterruptedly here, in the Phanar, guarding the place and the manner of life of Romiosyni, in humility, with patience and a smile, with confidence in God’s providence and grace; the sick were healed and what was missing was replaced. We have known you, Your Grace, since your childhood. We strongly urged the young Sophocles as a student of the Patriarchal Great School of the Genos to come often to the Ecumenical Patriarchate because of the Ecumenical Patriarch Dimitrios’ patriarchal interest in you. His good wishes will accompany you and strengthen you in your new ministry. Imitate his humility, his kindness and his simplicity. And always commemorate him when you celebrate the Liturgy. May his memory be eternal. Commemorate also, Your Grace, our brothers of Constantinople who left the City, but the City is always in their hearts, and many of them live in the hope of returning to their fatherland. Do not forget them in your prayers and liturgical services every day those dying abroad, who did not experience the delightful mysticism of the myriads of the Romioi whose souls are present at the liturgies and festivities of our churches, here at the Phanar, Pera, Tatavla, Chalcedon, Nihori, Makrochori, the Princes’ Islands, everywhere in the unforgettable City of Panagia Pammakaristos, who is chanting along with us the hymns  “Ti Ypermacho” and “Christ is Risen.” 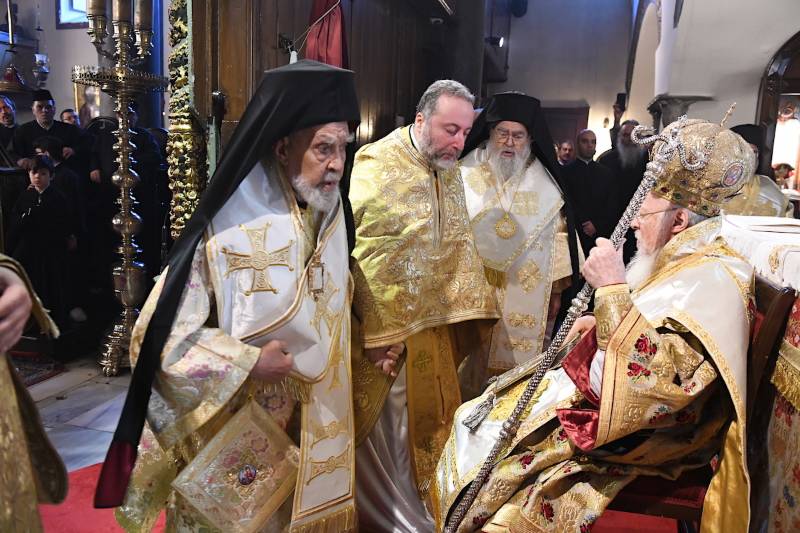 His All-Holiness urged the new Bishop, who will minister to the Grand Stavrodromi Community along with its Chief Hierarch, Metropolitan Germanos of Tranoupolis, to obey him and always seek his advice. “Be inspired by his example, his passionate zeal, his philanthropic activity, his exemplary devotion to the service of the people of God in the Stavrodromi area. Never forget that you have the great privilege of being a Bishop of the Holy Great Church of Christ, the bearer of the primacy in Orthodoxy. You will represent the Great Church, its traditions, its values, its flock, its spirit, always and everywhere. ”

Concluding his address, His All-Holiness noted:

“Today the Great Church is not only acquiring a worthy new Bishop, but also a promising new priest. We will, in a matter of minutes, ordain the Patriarchal deacon Aetios Nikiforos to the priesthood, and we will give him as your successor, Your Grace, to the Great Church. We patriarchally remind Your Grace and Father Aetios that whatever you are and whatever you have is a gift of God’s infinite grace. Whatever you do will be a work of the Lord performed by us in the Church. The ministers of the Most High are always sacrificial, selfless, sensitive to human suffering, never reluctant, never pessimistic. Love for God and love for mankind constitute and summarize their identity and spirituality. Love for God and love for mankind.” 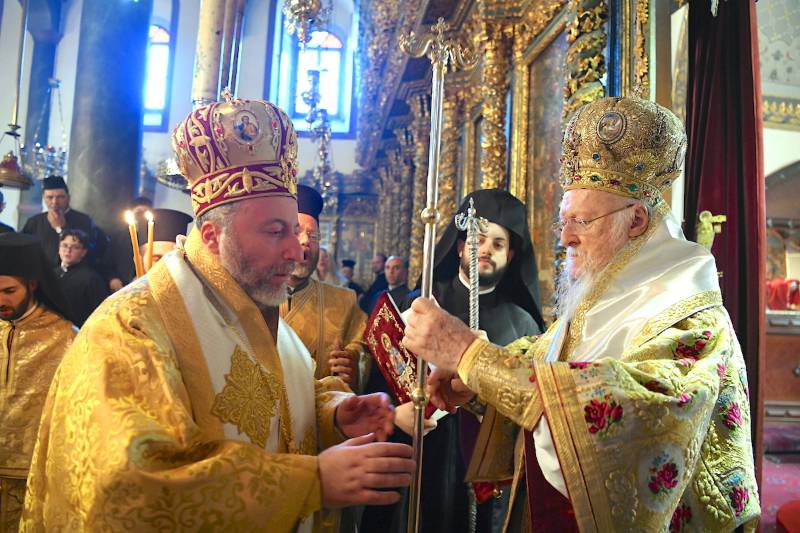 In the end, the newly ordained Bishop, having received the Hierarchical Mitre and rod from the hands of His All-Holiness, completed the dismissal from the steps of the Patriarchal Throne, according to the Patriarchal Order.

Present and concelebrating were Metropolitans Dimitrios, Geron of the Princes’ Islands, Irenaios of Myriophytos and Peristasis, Dionysios of Synados, Stefanos of Kallioupolis and Madytos, and Amphilochios of Adrianopolis, the Bishops Adrianos of Halicarnassus and Kassianos of Aravissos, clerics, Archons Offikion of the Holy Great Church of Christ, the Consul of Greece in Istanbul, Ms. Danai Vassilakis, relatives and friends of the newly ordained, along with numerous believers from the city and pilgrims from Greece.

Immediately afterwards, at the reception in the Eugenidio building of the Ecumenical Patriarchate, the new Bishop Benjamin of Tralles expressed his devotion to and respect for the person of His All-Holiness, and thanked the Synods of the Holy Hierarchs for his election, as well as those who participated in his ordination. 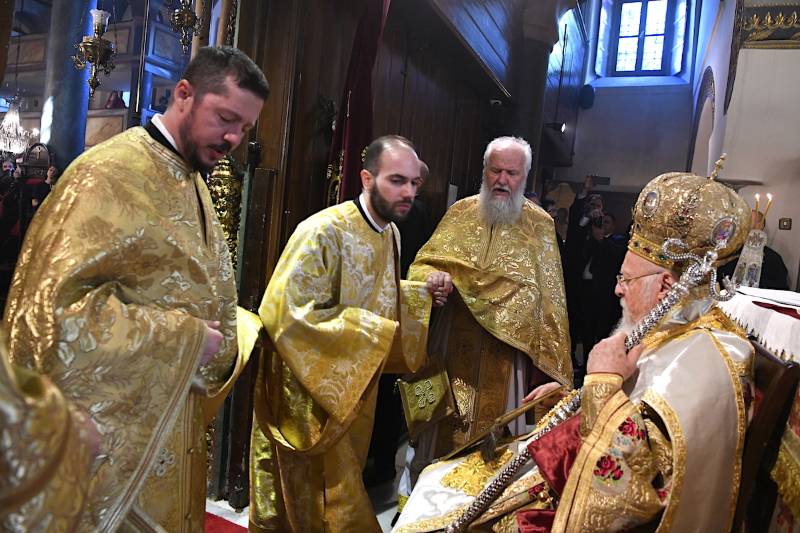 Afterwards, His All-Holiness patriarchally addressed his newly ordained Ecclesiarch, Father Aetios, noting his hard work and dedication to duty. Referring to the name he gave him at his diaconal ordination during this year’s celebration of the Sunday of Orthodoxy, in honor of the Archdeacon Aetios of the Church of Constantinople, who played a key role in the Fourth Ecumenical Council, during which the privileges of the Great Church were established, the Ecumenical Patriarch noted:

“Certainly for us privileges and rights do not translate into controlling or hegemonic tendencies, as certain of our detractors claim, heedless of the ethos and the great humility and poverty of the Church of Christ, though they received the light of Christ, but are given and implemented as a primacy of service, giving, and self-emptying, as history unquestionably testifies. Indeed, the daily dedication of this witnessing Church is the concern of all the Churches. ”

His All-Holiness then described the duties and obligations of the Ecclesiarch, while referring to his studies in Canon Law in the following year:

“You specialize in Canon Law. This goes hand-in-hand with your new duties to keep order in the church and not transgressing against that order by contravening and trampling upon it. And what are the canons in the Church? What is their purpose? Precisely to maintain order, discipline, peace, unity, and the proper functioning of ecclesiastical life. So there was put in place an order and a hierarchy of thrones and ecclesiastical matters in general. And within this system and organization, Constantinople holds the first position, a service as we have said, which position, with all its privileges and rights, her ignorant sons and daughters have endeavored to dispense with, moving against their benefactor. They are disputing both divine and secular laws, steeped in the centuries, in an attempt to satisfy human ambition and political expediency. But their efforts are in vain! Because Orthodox ecclesiology and the canonical order of the Church, do not change, and the gates of hell do not prevail against the Church. They are so deeply rooted in the two-thousand-year history of Christianity that no one can uproot them, as strong and robust as he is, or thinks he is, against the entire world and against God.”

In his response, the Ecclesiarch, Aetios, expressed his respect and gratitude to His All-Holiness for his elevation.