Cliffs of Freedom to Stream on Major Platforms

Print Cliffs of Freedom to Stream on Major Platforms 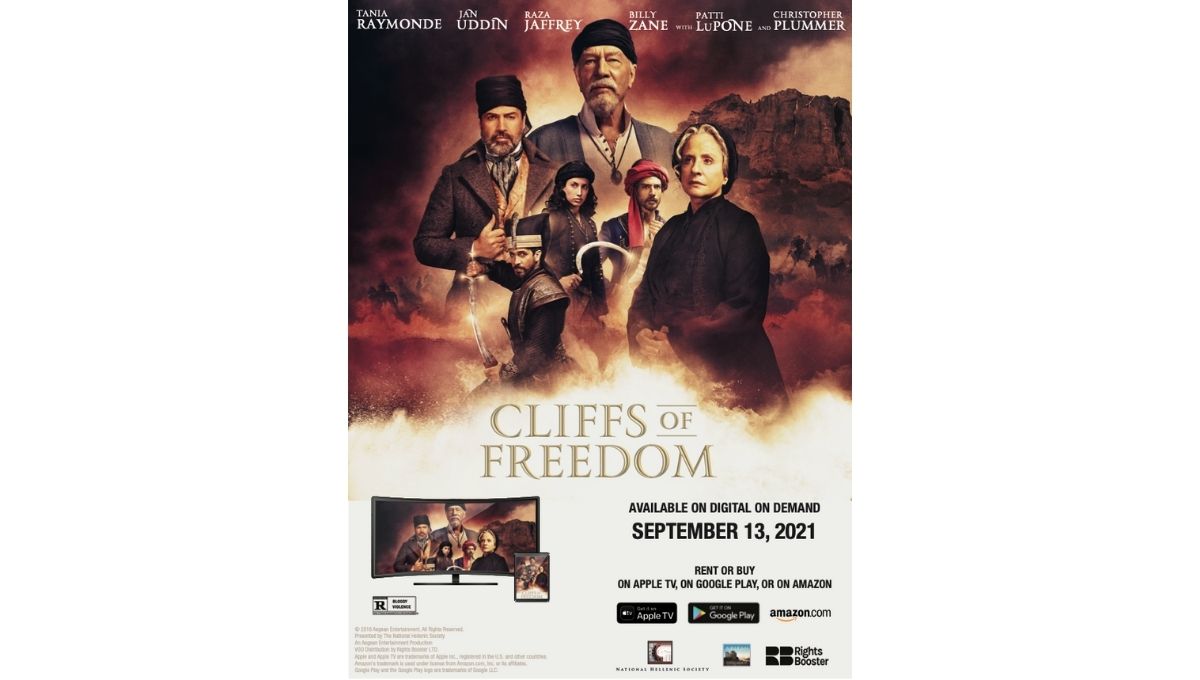 Cliffs of Freedomn to Stream on Major Platforms

To celebrate the bicentennial of Greece’s Revolutionary War, the National Hellenic Society (NHS) is pleased to announce that the film Cliffs of Freedom will stream on major platforms including Amazon Prime, Apple, and Google Play beginning on September 13, 2021.   The epic nature of Cliffs of Freedom will make audiences reflect, feel, think, and be inspired.  The film’s storytellers, creators and artisans have come together to convey a story that will have a profound impact on audiences, especially for those that are the progeny of the countless forebears that lived so that they and those that followed would always be free.  The film will be made available with western Armenian subtitles.

Cliffs of Freedom is an historical drama romance movie based and inspired on a novel written by Marianne Metropoulos, Daughter of Destiny.  The novel served as the springboard to the film produced by Marianne and Dean Metropoulos with Marianne serving as co-writer of the screenplay.

Marianne’s story is an amalgam of stories, accounts and events that transpired during Greece’s Revolutionary War.  The lives, struggles, sacrifices and saga of the Greeks is brilliantly on full display, symbolic of the resiliency, resolve and grit of the Greek people determined to be free.  Their deep faith, values and love of family, culture and heritage marks the first time their story is shown on the silver screen in epic form.  The film’s production values, acting, score and the caliber of cast and crew have created a motion picture that has riveted audiences.

The film is also available for theatrical release.  Recently, NHS completed the acquisition of all rights to this film.  Should you and/or a parish or parish organization like more information as to how to host a special screening at local theater, please contact NHS at [email protected].

*Cliffs of Freedom story centers on an ill-fated romance between a beautiful young Greek village girl set in the beginning days of Greece’s Revolutionary war.  The girl, played by veteran actress, Tania Raymonde, falls in love with and a handsome and conflicted Ottoman Colonel, portrayed by actor Jan Uddin.  The Colonel is mentored by a Greek elder and advisor to the Empire, brilliantly portrayed by the late Academy-Award winning actor, Christopher Plummer.  The brutality of the war comes to a head when the Greek village girl’s family is massacred, she swears revenge directly implicating the man she loves which ultimately leads to a battle that changes the course of history for Greece and her people.

The story is set in Valtetsi, a small village in Arcadia in Greece’s Peloponnese.  As the Greek Revolutionary War looms large in smaller Ottoman strongholds including Valtetsi, the hero of Greece’s War of Independence, General Theodoros Kolokotronis calculates that following successful campaigns in Levidi,  Doliana and Grana a win in the stronghold of Tripolitsa would serve as a bellwether symbol of Greece’s resolve to win the fight for freedom.  After an incessant and steady campaign, Tripolitsa falls on September 23, 1821.  A day marking the beginning of the end of Ottoman’s rule and four centuries of subjugation over Greece.

*The National Hellenic Society (NHS) is a non-profit foundation comprised of a Who’s Who of visionaries, philanthropists and leaders that celebrate, share, and pass on Hellenic heritage in America.  NHS programs include its signature Program, Heritage Greece which has reconnected and sponsored 500+ college aged students of Greek descent on a life-changing experience hosted by the American College of Greece.