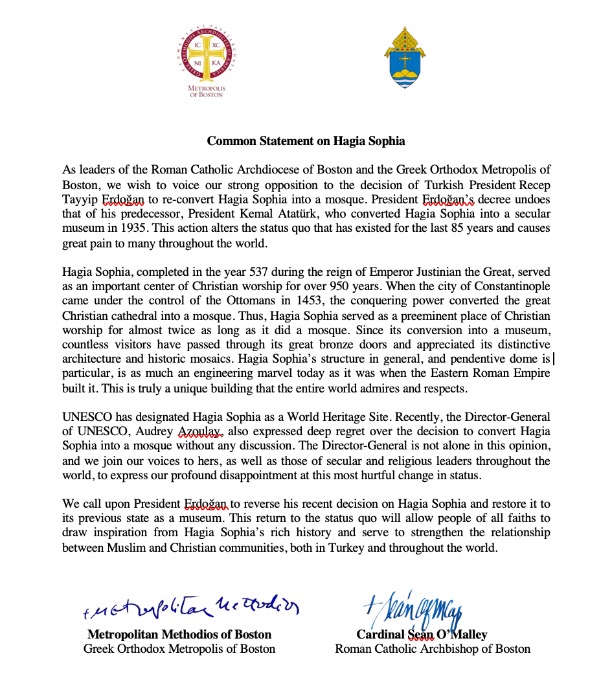 As leaders of the Roman Catholic Archdiocese of Boston and the Greek Orthodox Metropolis of Boston, we wish to voice our strong opposition to the decision of Turkish President Recep Tayyip Erdoğan to re-convert Hagia Sophia into a mosque. President Erdoğan’s decree undoes that of his predecessor, President Kemal Atatürk, who converted Hagia Sophia into a secular museum in 1935. This action alters the status quo that has existed for the last 85 years and causes great pain to many throughout the world.

Hagia Sophia, completed in the year 537 during the reign of Emperor Justinian the Great, served as an important center of Christian worship for over 950 years. When the city of Constantinople came under the control of the Ottomans in 1453, the conquering power converted the great Christian cathedral into a mosque. Thus, Hagia Sophia served as a preeminent place of Christian worship for almost twice as long as it did a mosque. Since its conversion into a museum, countless visitors have passed through its great bronze doors and appreciated its distinctive architecture and historic mosaics. Hagia Sophia’s structure in general, and pendentive dome is particular, is as much an engineering marvel today as it was when the Eastern Roman Empire built it. This is truly a unique building that the entire world admires and respects.

UNESCO has designated Hagia Sophia as a World Heritage Site. Recently, the Director-General of UNESCO, Audrey Azoulay, also expressed deep regret over the decision to convert Hagia Sophia into a mosque without any discussion. The Director-General is not alone in this opinion, and we join our voices to hers, as well as those of secular and religious leaders throughout the world, to express our profound disappointment at this most hurtful change in status.

We call upon President Erdoğan to reverse his recent decision on Hagia Sophia and restore it to its previous state as a museum. This return to the status quo will allow people of all faiths to draw inspiration from Hagia Sophia’s rich history and serve to strengthen the relationship between Muslim and Christian communities, both in Turkey and throughout the world.