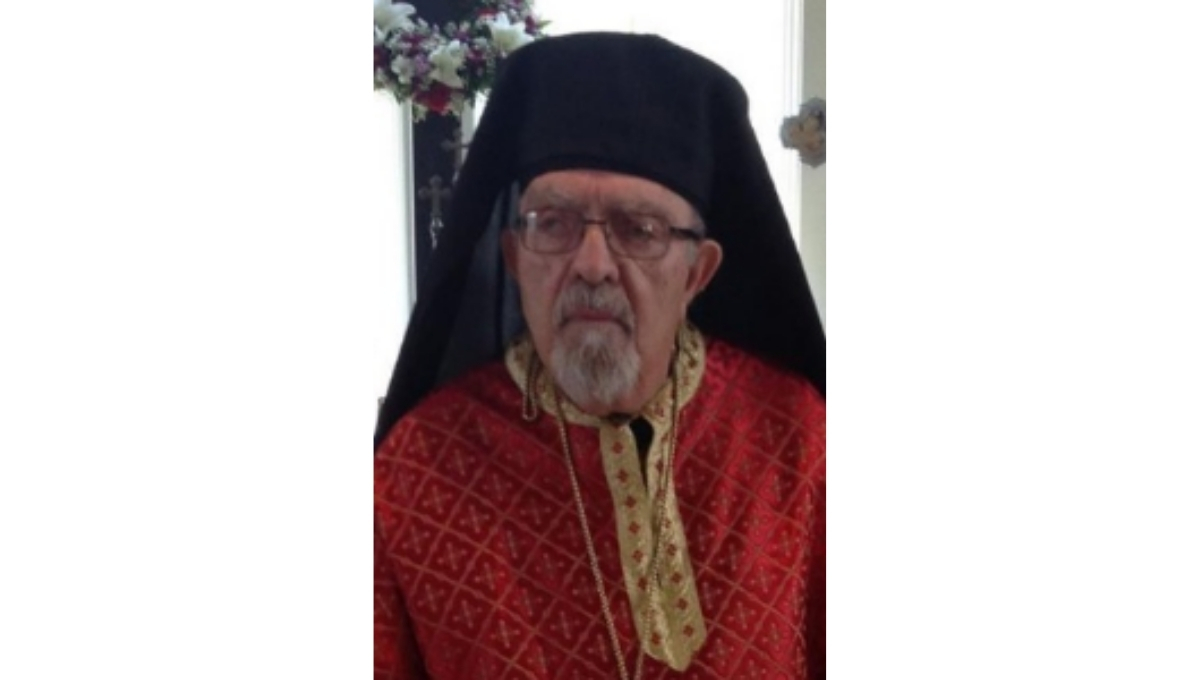 It is with great sorrow to announce the passing of The Very Reverend Archimandrite Constantine Spyridon Bebis, on March 9, 2021 due to natural causes.  Fr. Bebis was the beloved pastor of Saint George Greek Orthodox Church, New Bedford, Massachusetts. He was 94.

Born on the island of Crete, Greece, Father Bebis survived the Nazi occupation of Greece during World War II. His widowed mother and two siblings moved to Piraeus, Greece.
He survived many trials and tribulations with the help of his deep faith, such as starvation and the bombing of Athens during the Nazi occupation. In church, he was selected to receive the “Jesus’ Plate” daily, This charity saved his life. Knowing Americans and Allied Forces would save the Greeks, he learned to speak fluent English by giving his portion of his bread to an English teacher.

When given an opportunity by his high school Sunday school teacher to become a priest in America, he “raised” his hand to volunteer. After going through storms and a sinking boat off the coast of Marseilles, France, he was saved by a French destroyer finally arriving in Baltimore, Maryland on an American Victory Ship. He entered the Greek Orthodox Archdiocese Holy Cross Theological School in Brookline, Massachusetts, graduating with a Bachelor of Divinity degree. He furthered his studies and earned a Master of Divinity from Boston University. He also earned a doctorate certificate in Divinity from Harvard University.

He was ordained into the priesthood in 1951. He became a Greek Orthodox priest in Danbury, Connecticut then moved to New Bedford, Massachusetts in 1953. He was the priest and Spiritual Leader to the Greater New Bedford Greek Orthodox community for nearly 60 years. He also faithfully guided the efforts to build a new church on Cross Road in Dartmouth, Massachusetts in 2011.

Father Bebis was an active member of the Greater New Bedford Inter-Church Council, New Bedford Library Trustee, Spiritual Leader of the Annual Blessing of the Fleet, Founder and former president of the anti- poverty agency of the North End (Agnes Braz/ Hope Bean) Community Center, President of the On-Board Legal Services for the Poor, Spiritual advisor to the Greek Orthodox Youth of America and the Ladies Philoptochos Society of St. George Greek Orthodox Church, President of the Greek Orthodox Priest Brotherhood, and an advocate for social justice, literacy and learning, and numerous other philanthropic, community, and charitable works.

The Ecumenical Patriarchate of Constantinople awarded the title of Protopresbyter in 1996, the highest rank of a married priest in the Greek Orthodox Church. He was presented by the Tifereth Israel Synagogue in 1990 for his “devoted efforts in the cause of brotherhood and understanding in our community.”

For his 50 years of dedicated service in the Greater New Bedford area, an oil portrait by artist Deborah Macy is on display at the New Bedford Free Public Library, and a memorial bench at Bristol Community College in Fall River pays tribute to his contributions to his parish and community. In 2003, Metropolitan Methodios of Boston conferred on Father Bebis the ancient office of Archimandrite, a highly respected liturgical position. He was also awarded Dartmouth Man of the year in 2011 and many other numerous rewards and recognitions.

Father Bebis was a devoted and loving father, grandfather, and great-grandfather who was extremely proud of his family.He was predeceased by his wife, Presvytera Irene H. (Vouros) Bebis, his sister Stella Dalley from Australia, and his mother Olga Bebis.

The wake for Fr. Bebis will be held on Monday, March 15 from 4-8pm at Saint George Greek Orthodox Church 186 Cross Road, Dartmouth, Massachusetts. On Tuesday, March 16 the funeral service will be private but live-streamed at 11:00 am on Saunders-Dwyer Home for Funerals website at www.saundersdwyer.com, and a private burial will follow. In lieu of flowers, please make your donations to the Bebis Memorial Trust Fund c/o St. George Greek Orthodox Church, P.O. Box 79411, Dartmouth, Massachusetts 02747.