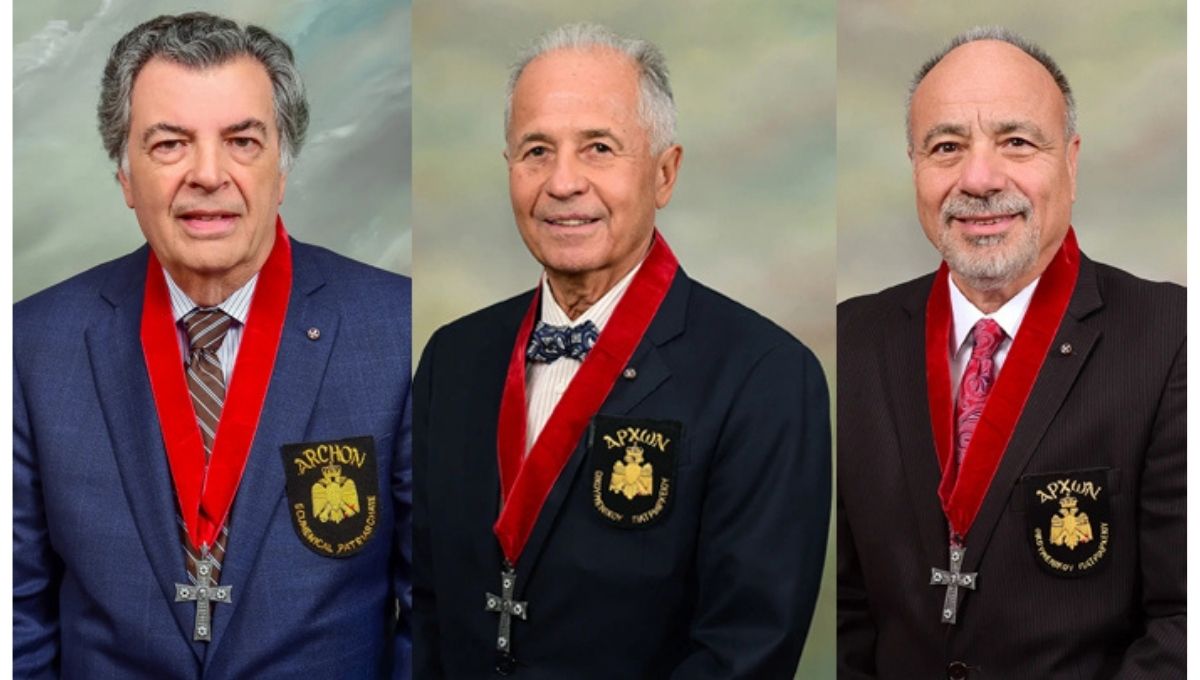 On Friday, January 21, 2022, at a meeting of the National Council of the Order of Saint Andrew the Apostle, Archons of the Ecumenical Patriarchate, three national officers were elected: a National Vice Commander, a National Treasurer, and a National Secretary.
Hon. B. Theodore Bozonelis, Archon Ekdikos, was elected the new National Vice Commander, succeeding the late John Halecky, Jr., who fell asleep in the Lord on December 22, 2021. Reelected as National Treasurer was Peter J. Skeadas, Archon Hieromnimon; and Gus M. Pablecas, Archon Ostiarios, was chosen as National Secretary.
His Eminence Archbishop Elpidophoros stated: “The rich history of the Order of Saint Andrew the Apostle continues to be written every day. We thank all those Archons who have served and sacrificed for our Holy Mother Church of Constantinople over the years, and at the same time, we pray for wisdom and strength for those who are taking up new roles. We are confident that these leaders will work ceaselessly for the salvific ministry of the Ecumenical Patriarchate; I thank God for their service and look forward to our sacred work together.”
Dr. Anthony J. Limberakis, National Commander of the Order of Saint Andrew the Apostle, Archons of the Ecumenical Patriarchate, said: “I am grateful to God for these superb choices as new Archon national leaders. Archon Judge Bozonelis follows in the extraordinary tradition of his legendary predecessors, Nicholas J. Bouras and John Halecky, Jr.; Archon Peter Skeadas continues to demonstrate the highest level of accountability and transparency in executing the financial responsibilities of the Order of Saint Andrew the Apostle and Archon Gus Pablecas with his unparalleled service and sterling reputation as a Regional Commander will be an outstanding National Secretary. The strength of the Order of Saint Andrew has always been determined by the band of Archon brothers who unselfishly devote their time, talent and treasure to the Mother Church, and the Order has never been stronger.”
Archon Bozonelis has previously served as National Secretary and Executive Committee member of the Order. He served as vice chairman of the Order's Legal Committee and is Chairman of the Order's Patriarchal Properties and Minority Concerns Committee. Archon Bozonelis was a judge of the Superior Court of New Jersey from 1990 to 2011. He was presiding judge in the Criminal Court, Equity and Family Divisions. In 2003, he was appointed the assignment (chief) judge for Northern New Jersey Counties where he oversaw the administration of state courts and 56 municipal courts. In that capacity, Judge Bozonelis also served as a member and chairman of the State Judicial Council which supervises the overall state judiciary. He also currently serves as the Secretary and Executive Officer of the Archdiocesan Council.
Archon Skeadas was first elected National Treasurer of the Order in January 2018. He also serves as Chair of the Order's Spirituality Committee and the annual Archon Lenten Retreat, and has served on the Order's National Council as well as the Order's Regional Commander for the Archdiocesan District. He is a member of the Archdiocesan Council, serving on the National Finance Committee and the Archdiocesan District Finance Committee.
Archon Pablecas has served as the Metropolis of Chicago Council’s First Vice President, Parish Council President; Chairman of Finance, Ways and Means, Budget; Metropolis Task Force Chairman; Chairman of Metropolis Clergy Laity and Real Estate Committees; member of the Archdiocesan Council and of the Metropolis of Chicago Building, Planning and Architectural Committee. He is President/CEO of a company active in real estate acquisitions and asset management and is a former FBI Special Agent.
Archons of the Order of Saint Andrew the Apostle are honorees by His All-Holiness Ecumenical Patriarch Bartholomew for outstanding service to the Church, and are well-known distinguished, and well-respected leaders of the Orthodox Christian community. It is the sworn oath of the Archon to defend and promote the Orthodox Christian faith and tradition. His special concern and interest is to serve as a bulwark to protect and promote the Sacred See of Saint Andrew the Apostle in Constantinople, and its mission.
For more information, visit archons.org.