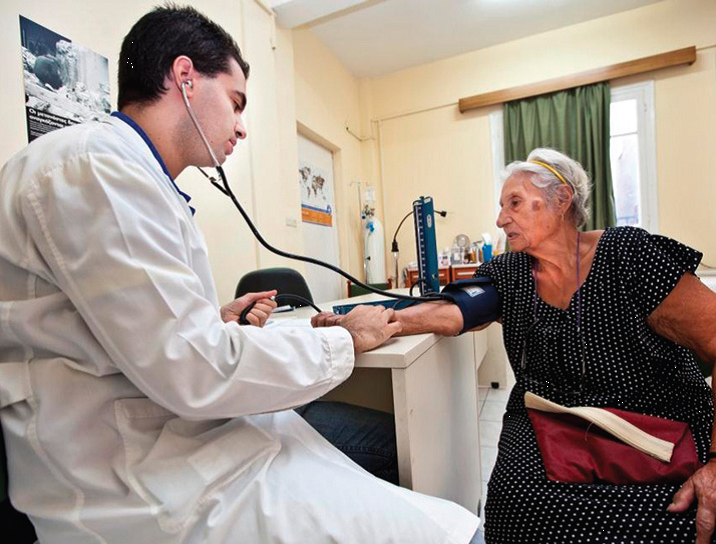 With her pension and healthcare benefits severely reduced, this elderly Athens woman joins millions of other impoverished Greeks turning to free medical clinics for much needed health care. Through a generous grant from the Greek Orthodox Archdiocese of America, IOCC will help provide emergency assistance to Greece’s most vulnerable families and elderly.
© (Photo: MDM-Greece)

NEW YORK – The Greek Orthodox Archdiocese of America announced today a grant of $150,000 to International Orthodox Christian Charities (IOCC) to assist in providing emergency assistance for the people of Greece who are especially vulnerable as a result of the continuing economic crisis, austerity measures and a collapsing health system. The $150,000 grant to IOCC, will be directed at efforts to assist the elderly, children and large families with basic necessities for living as the economic situation deteriorates and winter approaches. The support comes from funds already collected by the Archdiocese Relief Fund for the People of Greece.

“Even as we reach out to assist to the best of our ability those who have been affected by Hurricane Sandy here in the United States, we remain mindful of the continued needs in Greece and elsewhere” said Archbishop Demetrios. “These funds which had been collected this past year for the relief effort in Greece represent a further expression of the love and concern of the faithful of the Greek Orthodox Archdiocese of America for the suffering of our brothers and sisters in that country.”

The National Philoptochos Society, the philanthropic arm of the Greek Orthodox Archdiocese of America, granted the total amount of $160,000 (June 28, 2012) to five entities in Greece, which were collected following the National Philoptochos Appeal for assistance to those in need. Specifically, $50,000 was sent to “Apostoli,” the non-governmental, philanthropic organization of the Archdiocese of Athens; $50,000 was sent to the Holy Metropolis of Thessaloniki, $25,000 was sent to the Holy Archdiocese of Crete; $10,000 was sent to “Kivotos tou Kosmou,” an organization devoted to the care of children;  and $25,000 to the “Theotokos Foundation,” an organization for children, adults and families with learning and other developmental disabilities.  These amounts were in addition to the $25,000 the Philopotchos had initially expedited from their Emergency Fund through IOCC (International Orthodox Christian Charities) that provided medical supplies and food staples.