Archdiocese Mourns the Passing of Bishop John of Amorion (1928-2012) 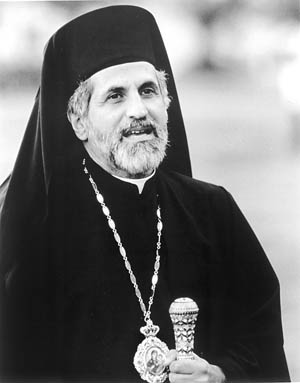 NEW YORK – The Greek Orthodox Archdiocese of America mourns the passing of Bishop John of Amorion who fell asleep in the Lord last Saturday December 1, 2012 at the age of 84.

His Eminence Archbishop Demetrios of America upon hearing the news of his passing he stated:

I have known Bishop John of Amorion since he served as a priest in the Church of the Dormition of Theotokos in Somerville, Mass.  Since then, I followed his continuous service to the Church not only as a priest but as a Bishop up to his retirement and to the day of his death.   He had been always a person with deep religious feelings and a desire to communicate his knowledge to the people for their edification and spiritual enrichment.
We certainly will miss him as a witness of the eternal Orthodox faith.

Bishop John Christodoulos Kallos served the flock that God entrusted to his care with a vision and a purpose, and served our Lord with all his heart, soul, strength and mind. When he was ordained on January 17, 1971, at the Annunciation Cathedral, Houston, Texas by Archbishop Iakovos, with Bishop Silas of Amphipolis and Bishop Iakovos of Apameia as co-consecrators, Bishop John became the first American-born bishop in the Greek Orthodox Church. He was the first Bishop of the Greek Orthodox Diocese of Atlanta (1981-1988), and the first President of the St. Photios Greek Orthodox National in Shrine in St. Augustine, Fla. (1989-1999). Bishop John served as Auxiliary Bishop in Houston (1971-1973), and Denver (1974-1977), as Diocesan Bishop in Charlotte (1978-1980), and Atlanta (1981-1989). On January 1, 1989, for reasons of health, he resigned as Bishop of Atlanta.

Bishop John was born on March 29, 1928, in Chicago, Illinois to James and Kaliope Kallos. His parents were from Alatsata, Asia Minor, located across from the Greek island of Chios in today’s Turkey. He grew up and was educated in the Boston area. He was a graduate of Boston College (Chestnut Hill, Mass.), Holy Cross Greek Orthodox Theological School (Brookline, Mass.) and the Divinity School, University of Athens (Greece). He also pursued graduate studies at the Ecumenical Institute (Geneva, Switzerland), Huntingdon College (Montgomery, Ala.), Harvard Divinity School and Episcopal Theological School (Cambridge, Mass.).

He was ordained a Deacon on August 15, 1955, by Bishop Athenagoras of Elaias at the Dormition Church, Somerville, Mass., and a Priest on October 21, 1956, by Bishop Athenagoras at the Holy Cross Seminary Chapel. He served as Archdeacon and Assistant Librarian at the Holy Cross Seminary, and as a Priest at the St. Demetrios Church, Fall River, Mass., Annunciation Church, Montgomery, Ala., Holy Trinity Cathedral, Charlotte, NC and at the Dormition Church, Somerville, Mass. Bishop John also served as an Assistant Dean, Dean of Students, Registrar and Instructor at Holy Cross Seminary in Brookline and as a supply priest to the following churches: Holy Trinity, Concord, NH; St. Vasilios, Newport, NH, St. Demetrios, Biddeford, Maine; St. George, Pittsfield, Mass.; St. Demetrios, Weston, Mass.; and Transfiguration, Sioux Falls, SD. In 1961, he established the American Greek Orthodox Community at the U. S. Air Force Base in Athens, Greece where he served as Auxiliary Civilian Chaplain.

Bishop John became involved with the St. Photios Greek Orthodox National Shrine in St. Augustine, Fla., in November, 1977, with his appointment as Diocesan Bishop in Charlotte, NC, becoming the first chairman of the Board of Trustees in August, 1981, and in January, 1989, the Shrine’s first President. His appointment as Trustee President of the St. Photios Shrine ended with the selection of the new Bishop of Atlanta in 1999, according to the Shrine’s By-Laws.

Bishop John was bestowed the title Bishop of Amorion by the Ecumenical Patriarchate on October 15, 1992. He received honors from his Alma Maters, Church of Finland and the Patriarchate of Jerusalem. He was the author of 15 pamphlets and 10 books, including “What about the Holy Mandylion and the Turin Shroud,” “St. Photios, Patriarch of Constantinople,” “An Analysis and Critique of the Photian Schism,” “Patriarch Meletios Metaxis,” and “St. Photios Shrine.” He wrote 200 articles which have appeared in various journals and newspapers. In 1984 he authored the article “Greek Orthodox Church in the South” which appeared in the “Encyclopedia of Religion in the South,” and was a contributing writer to the weekly “The Hellenic Voice” (Boston, Mass.). In 2005, he authored the five volume series “Glory to God.”

In 2006 he established the Bishop John Kallos Scholarship Fund in memory of his parents, James and Kaliope Kallos, at the Holy Cross Greek Orthodox Theological School.