NEW YORK – The Greek Orthodox Archdiocese of America establishes the Hurricane Sandy Relief Fund and designates Sunday November 11, 2012 as a day of prayer and offering on behalf of the victims of Hurricane Sandy.

Archbishop Demetrios of America, on behalf of the Holy Eparchial Synod, issued today an Encyclical  (click here) in which he calls upon all the faithful throughout the Church in America to pray fervently for comfort from above.  We offer prayers of remembrance for those who perished and of solace for those who lost family members.  We pray for the many who have lost their homes, and for those who are facing uncertainty regarding their jobs and livelihood.

The Archdiocesan Encyclical designates next Sunday a day of prayer for the victims and asks the parishes of our Holy Archdiocese to conduct a special collection for the “Hurricane Sandy Relief Fund,” and the proceeds to be sent to the Archdiocese, which will coordinate the relief efforts with the National Philoptochos, the Metropolis of New Jersey and the Direct Archdiocesan District. Donations by check can also be send directly to the Archdiocese designated for the Hurricane Sandy Relief Fund or made online at: http://www.goarch.org/special/hurricanesandy 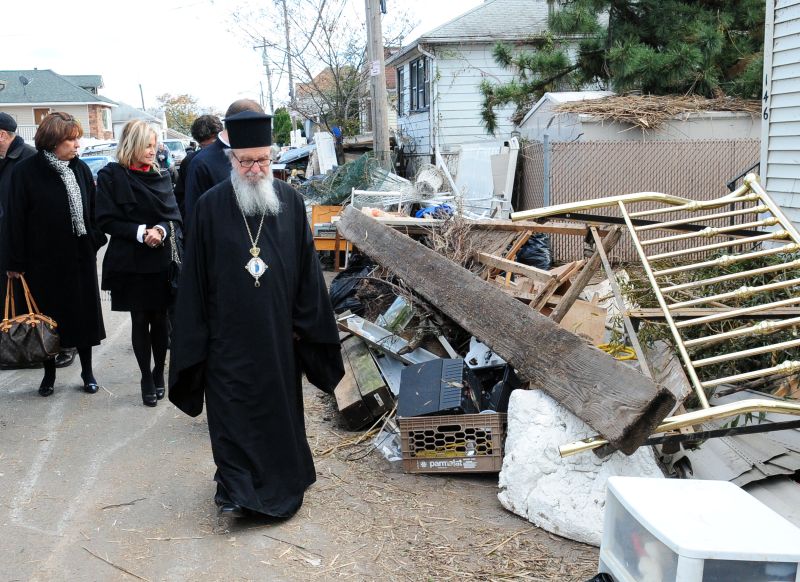 The Archbishop continuing the assessment of damages of Hurricane Sandy, visited on Sunday Nov. 4, the Greek Orthodox Church of Holy Trinity / St. Nicholas in Staten Island, N.Y., which has been hard hit by the storm. He presided over the Divine Liturgy and offered a Trisagion prayer service for the repose of the souls of those who lost their lives. He also led the congregation in prayer for strength and comfort from God for all the people who lost their homes, their businesses and property and are suffering in the aftermath. After the liturgy he met families who were affected by the hurricane and together with the community’s pastor, Fr. Nicholas Petropoulakos and National Philoptochos President Aphrodite Skeadas surveyed an area of Staten Island that was ravaged by the storm and suffered tremendous damage and loss. The Archbishop was joined by Greek American NY Assemblywoman Nicole Maliotakis, who is coordinating relief efforts for her constituency and together they met with and spoke to many volunteers, including local AHEPA officials, who were distributing food and supplies or were helping in the cleanup. 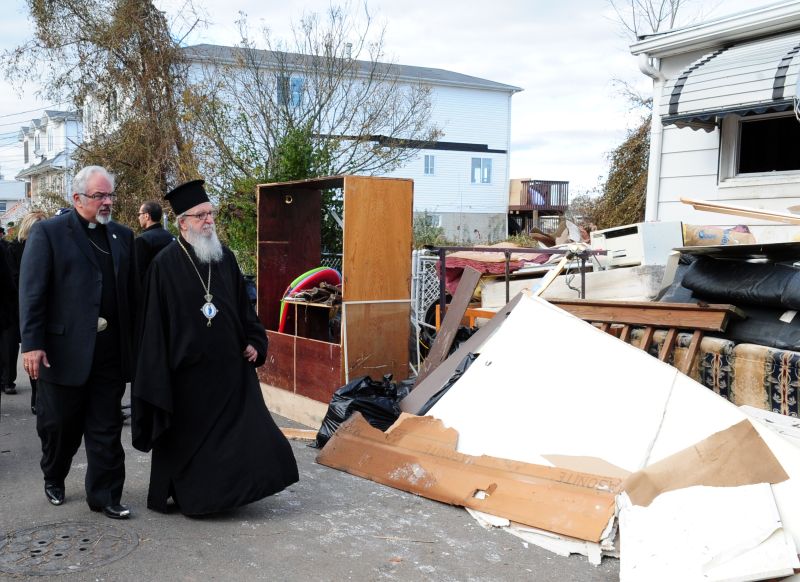 Fr. Nicholas Petropoulakos said he appreciated the presence and support of the Archbishop in these difficult times. He said that many families in the parish had extensive water damage and suffered losses in their homes and business. The church, he added, has relatively minor exterior damage. Fr. Nicholas conveyed that the parish has received many calls and offers for help in kind and offers from volunteers from all over the country, and he explained that the church is serving as a collection and distribution center, funneling relief aid to people in need on Staten Island.

For a photo album from the Archbishop’s Staten Island visit the Archdiocese photo gallery.