New York – The Archdiocesan Council of the Greek Orthodox Archdiocese of America began its new two-year term and convened for its regularly scheduled fall meetings Oct. 13-14, 2016 at the New York Marriott Marquis Hotel.

His Eminence Archbishop Demetrios Geron of America presided at the Archdiocesan Council meeting, in the presence of the Metropolitans of the Holy Eparchial Synod, who had concluded the Synod meetings the day before.

Following the opening prayer service, and during the first joint session of the Archdiocesan Council and the National Philoptochos Board, Archbishop Demetrios presented a general report to the Council. His Eminence, first conveyed the “warmest prayers and love” of His All-Holiness Ecumenical Patriarch Bartholomew to the members of the joint session.

Archbishop Demetrios announced that, following 15 years of hard work and relentless efforts of the Archdiocese and the faithful, “the final and definitive legal documents for Saint Nicholas were signed,” the day before, and the rebuilding work continues to move ahead. He spoke extensively about the historic Holy and Great Council of the Orthodox Church, which was convened by the Ecumenical Patriarch in Crete last June. He further urged the Archdiocesan Council and the Philoptochos Board members to become acquainted with the texts produced by he Holy and Great Synod. 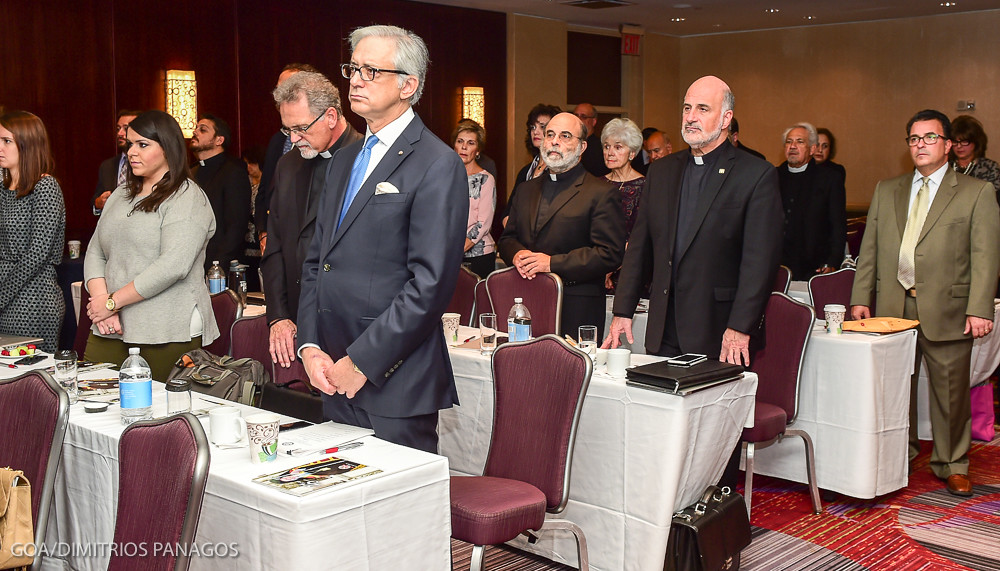 He also spoke about two other major events in the life of the Church, the 43rd Clergy-Laity Congress in Nashville, Tennessee last July and the most recent Seventh Assembly of Canonical Orthodox Bishops in the United States which took place in Detroit, Michigan, Oct. 4-6, 2016. Additionally, His Eminence paid tribute to Michael Jaharis of blessed memory for his 16 years of service, contributions and devotion to the Church as vice-president of the Archdiocesan Council.

Upon the conclusion of the joint session, Dr. Catherine Bouffides-Walsh, the Secretary of the Archdiocesan Council, began conducting the meeting, called the procedural “roll call,” and a quorum was determined. Archbishop Demetrios administered the affirmation of office for all Archdiocesan Council members as they began their 2016-2018 term.

The standing committees of the Council that had met the day before, presented their perspectives for the next two years, and reported on their respective ministry work. Dr. Anthony Limberakis presented a report on behalf of the Order of St. Andrew the Apostle, Archons of the Ecumenical Patriarchate in America. Fr. Evagoras Constantinides, director of Ionian Village presented a report on this vital youth national camping ministry of the Archdiocese and apprised the members on the destruction caused in the Ionian Village camp from the tornado that hit the area last month. He spoke about the plans to rebuild and renew, in time for next summer, and the fundraising efforts underway towards achieving this goal.

Fr. Nathanael Symeonides, director of the Office of Inter-Orthodox, Ecumenical and Interfaith Relations, spoke about the work of his Office and the recently held in Detroit 7th Assembly of Canonical Orthodox Bishops in America.

Finally, Jerry Dimitriou, Executive Director of Administration, presented a report and slide show on the work in progress of rebuilding Saint Nicholas.

Archbishop Demetrios offered concluding remarks and admonition as he spoke about “cultivating a mentality of potential” and asked the members to think about the following passage of Saint Paul’s letter to the Romans: “…having gifts that differ according to the grace given to us, let us use them: if prophecy, in proportion to our faith; if service, in our serving; he who teaches, in his teaching; he who exhorts, in his exhortation; he who contributes, in liberality; he who gives aid, with zeal; he who does acts of mercy, with cheerfulness. Let love be genuine; hate what is evil, hold fast to what is good; love one another with brotherly affection; outdo one another in showing honor. Never flag in zeal, be aglow with the Spirit, serve the Lord. Rejoice in your hope, be patient in tribulation, be constant in prayer. Contribute to the needs of the saints, practice hospitality. Bless those who persecute you; bless and do not curse them.” (Romans 12:6-14)