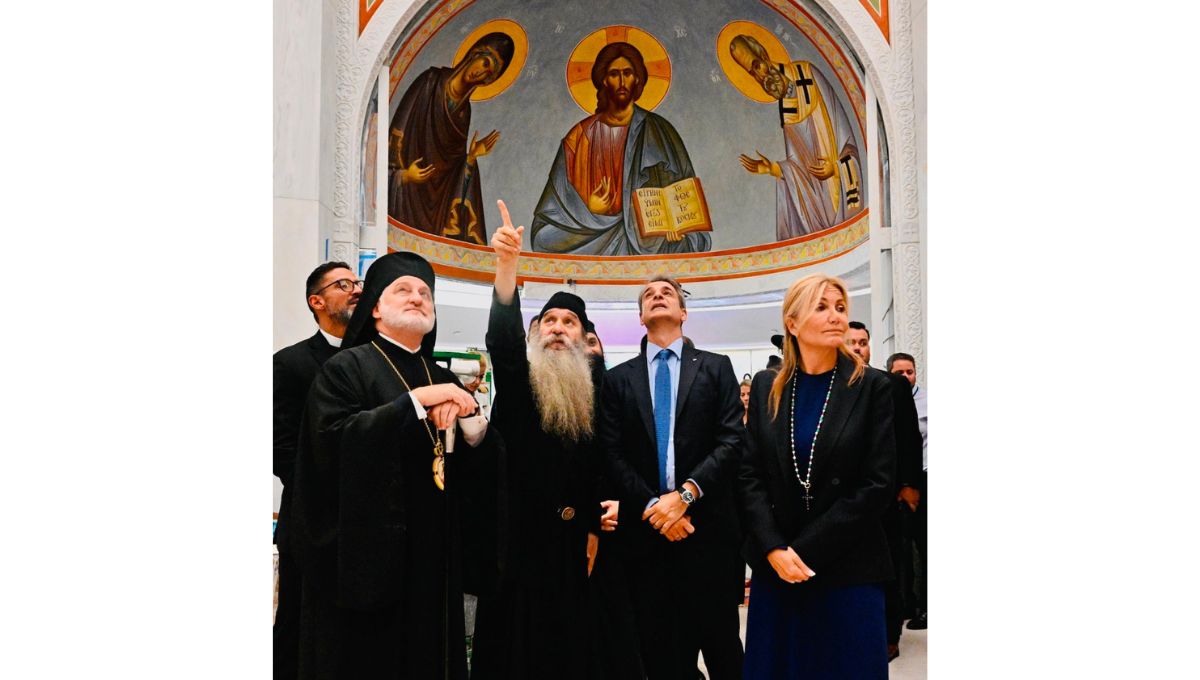 During the tour, Fr. Loukas showcased his exquisite iconographic work, now in the process of being installed on the Shrine’s walls. Meanwhile, Mr. Calatrava shared some of the inspiration behind the church’s design, which is rooted not only in the archetypical Byzantine forms— like the dome of Hagia Sophia— but in the classic marble of the Ancient Greek monuments.

“There is a parallelism,” Calatrava added, between the St. Nicholas Shrine and the Oculus down the street, which he had designed in 2016. The inside of both buildings is ribbed with steel, but, looking up, “here, you see the Pantokratora; there, you see the sky of New York.”

His Eminence thanked Mr. Steven Plate, Chief of Major Capital Projects for the Port Authority of NY and NJ, also in attendance, who had worked “with all his heart, with all his faith in God” to realize the beautiful vision of Mr. Calatrava and Fr. Loukas. The Archbishop also highlighted the pivotal role of the Friends of St. Nicholas, “a great organization [which] worked very hard under the guidance of Father Alex Karloutsos” to raise the necessary funds for the completion of the project.

“It’s a collective work of many, many people dedicated to the same ideals – the ideals to promote Hellenism and the faith, in a place where religion was the reason for this disaster and for the loss of so many innocent people,” said the Archbishop. “We want to give the message that religion can be a beacon of hope, love, reconciliation, peaceful coexistence, and collaboration of all peoples and of all religions. We thank you for honoring us here. God bless you and God bless Greece.”

Prime Minister Mitsotakis thanked His Eminence and shared that he has been following the progress of the site with great interest. “It is indeed very moving for me to be able to visit this place....I would like to thank everyone who has been actively involved in materializing this vision,” he said.

“It is indeed a spectacular building. I would say it’s a building that is fully aligned with the particular spiritual importance of this place and, right next to a site of pain and suffering, a church that symbolizes hope and unity— which will, I am sure, become a landmark of New York and a beacon of hope for everyone who visits,” said the Prime Minister.