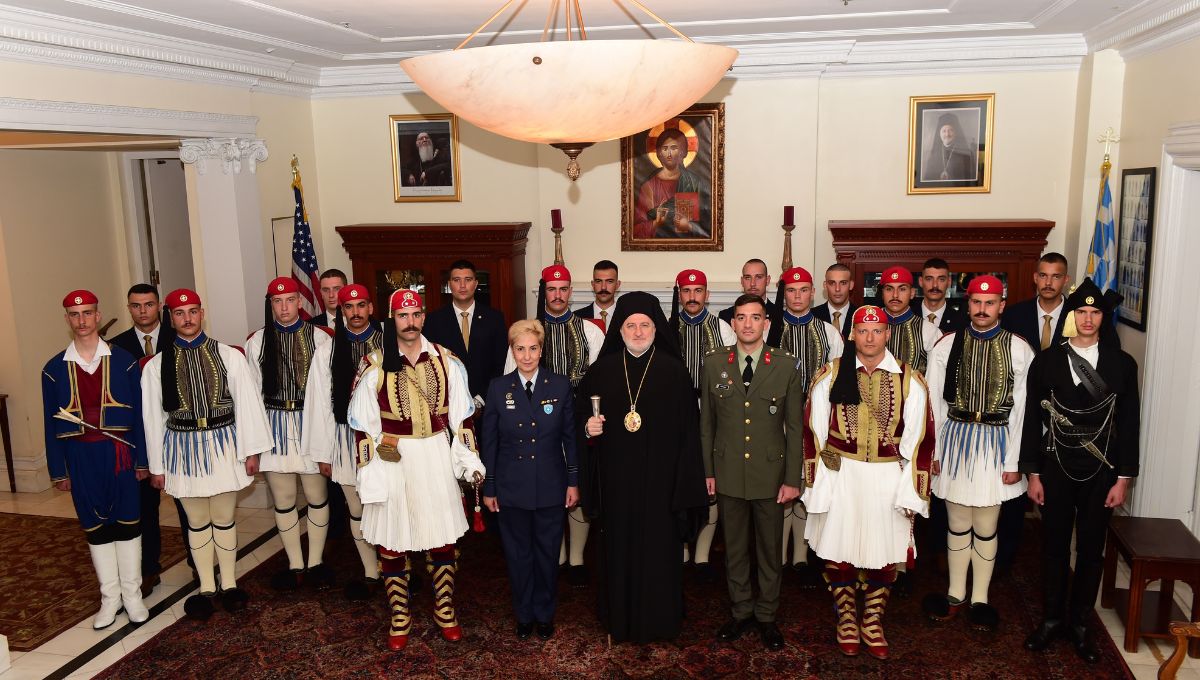 New York, NY -- On Friday, June 3rd, 2022, His Eminence Archbishop Elpidophoros of America welcomed the Evzones of the Presidential Guard of Greece to the Greek Orthodox Archdiocese for a Doxology, in honor of Greek Independence. Leading the Evzones were Major Paraskevi Syrmi, Lieutenant Konstantinos Kapsalis, Lieutenant Stavros Loukogeorgakis, and Second Lieutenant Aristotelis Pasparis. In a moving service, held in the Chapel of Saint Paul, Archdiocesan staff and faithful joined with the Archbishop, chanting Τῇ Ὑπερμάχῳ as the Evzones stood at attention.

In his remarks, the Archbishop said, “We thank Her Excellency Katerina Sakellaropoulou, President of the Hellenic Republic, for [the Evzones’] presence. And we thank them for their stalwart attendance here today with us at our Doxology.... Although March 25th is now well behind us chronologically speaking, from the perspective of the Church – which is the perspective of Καιρός, at every moment and in every occasion, or as we say in Greek, ἐν παντὶ καιρῷ, καὶ πάσῃ ὥρᾳ – it is always opportune to give thanks unto God for all His gifts.... Our observance of Greek Independence Day is the chapter of our freedom that is best expressed today by our democratic ideals and values. And these same ideals have been defended with courage and heroism by generations of our beloved Evzones.” (Read Full Remarks)

Following a brief reception, the Archbishop and the Evzones departed for the Bowling Green Park Greek flag-raising ceremony, organized by the Federation of Hellenic Societies of Greater New York and the Bowling Green Flag-Raising Committee. Following His Eminence's invocation, the NYPD Saint Paul’s Society raised the Greek flag.

“In hoisting the Greek Flag here at Bowling Green, we honor the Immortal Heroes of 1821. We honor Greece, and in truth, we honor ourselves. Because we remember, and we enshrine the Ἀγών of the Greek People in the New World, in the City of New York, by our act of faithfulness,” Archbishop said in his closing remarks. (Read Full Remarks)

The Evzones arrived in New York City yesterday, June 2nd, and will participate in Sunday's Greek Independence Parade, which returns this year after two years of Covid-19 restrictions.