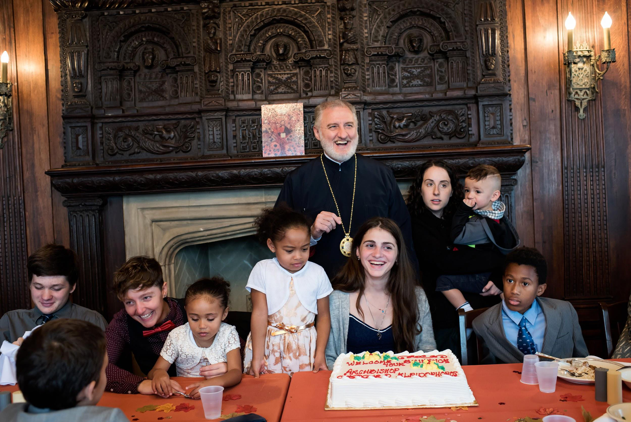 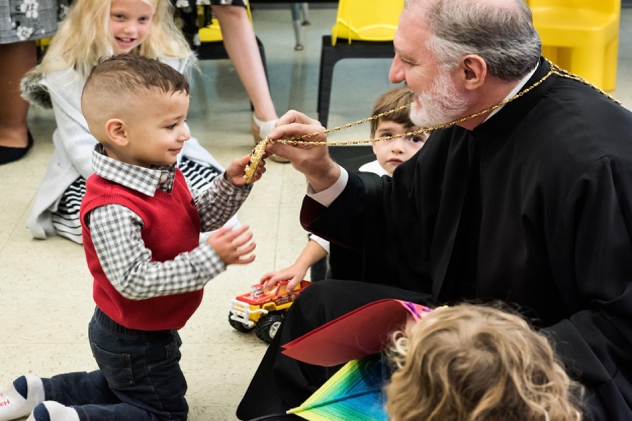 After touring the girl’s dorm, library and dental clinic, the Archbishop met the older Saint Basil Academy children at the AHEPA school building where the children were sorting dry goods to donate to a local homeless shelter. In honor of Archbishop Elpidophoros, the initiative is called Project Hope and was implemented in response to the Archdiocesan call to action to raise homelessness awareness. The tour continued to the Early Learning Center playroom where Archbishop Elpidophoros sat down on the colorful playroom foam floor and played with the children. Laughter and happiness ensued as His Eminence warmly engaged the young children to look at, touch and kiss his engolpion.

At Saint Basil Academy’s main building, the Archbishop celebrated the birthdays of three of the children. Thereafter, Father Sitaras and a young adult presented His Eminence with a clock that displayed the time at the Ecumenical Patriarchate and the Archdiocese. The Saint Basil Academy administrators, children and staff were honored and excited by the uplifting and inspiring visit of His Eminence Archbishop Elpidophoros and look forward to the next time.