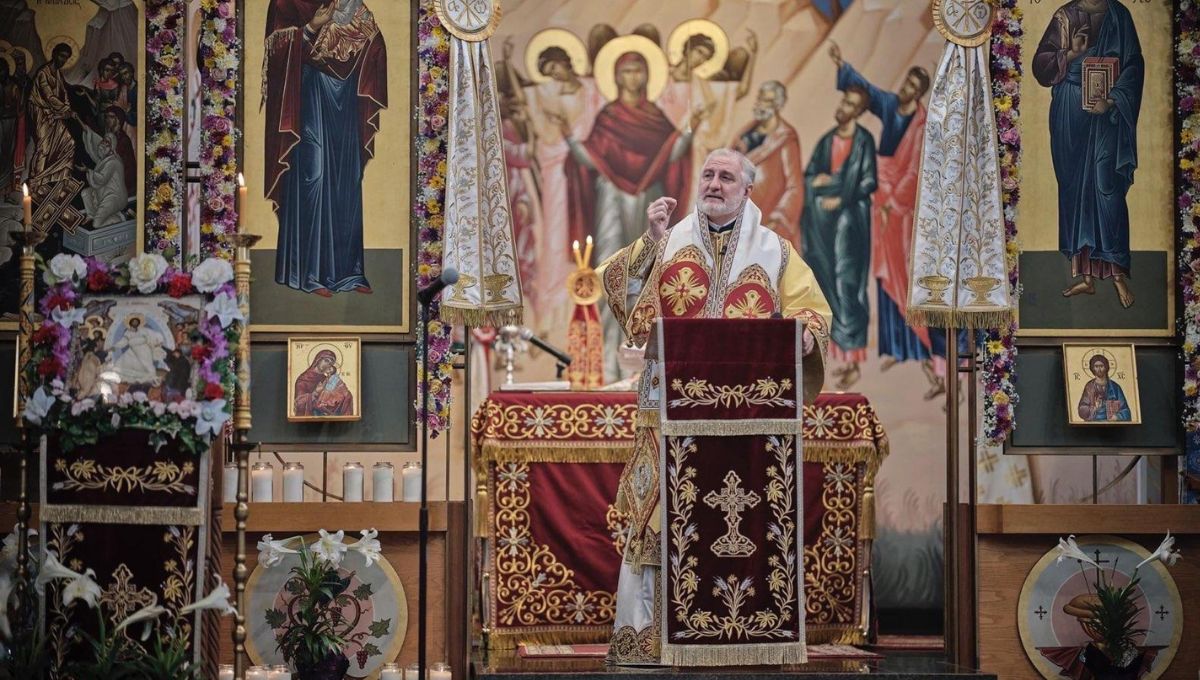 On the Sunday of the Myrrh-Bearing Women

Beloved sisters and brothers in the Risen Christ,

Christ is Risen!   [in response: Truly He is Risen!]

What a joy it is to be with you – at this beautiful church dedicated to the Resurrection of our Lord Jesus Christ – for the continuing Feast of Pascha morning, when we celebrate the Holy Myrrh-Bearing women.

These faithful Myrrh-Bearers arrived at the Tomb in the deep dawn to complete their mission of anointing the Body of the Lord in accordance with the prevailing Jewish custom. But they did not – or rather, could not –prevail; for He had already risen from the dead.

In the lists of the Women, we read of Mary Magdalene and Salome, a daughter of Saint Joseph the Betrothed, the wife of Zebedee and the mother of the Disciples, John the Evangelist and Iakovos, the first martyred of the Twelve. There was Joanna, the wife of Chuza, who was the steward of a high-ranking official of King Herod’s household.

There was also Susanna, and Mary and Martha, the sisters of Lazarus. And there was Mary, the wife of Cleopas, the one with Luke on the Road to Emmaus. And so that men should not be forgotten, we can include Nikodemos, the Disciple who came to Jesus by night, and who provided the myrrh and spices, as well as Joseph of Arimathea, the rich man who provided the tomb.

But there is a name that is always missing from the list. A name that should be expected, but is absent. That of the Panagia, the Lord’s own Mother, the Ever-Virgin Mary.

It is a curious fact, indeed, because as His mother, she was there for the unnailing and His being taken down from the Cross. She was spared watching her Son die. For John the Beloved Disciple took her to his own home, away from Golgotha. But she returned to perform the rituals of burial with the women who watched “from afar.”

Still, we do not hear of her on the morning of Pascha. And we only see her in the famous icon “Τό Χαῖρε τῶν Μυροφόρων,” the moment describing the Lord meeting Mary Magdalene and the so-called “other” Mary in the Gospel of Matthew:

And behold! Jesus encountered them and said, “Rejoice!” 1

But even within the iconographic tradition, can we really be sure this was the Theotokos?

When you read the accounts of the Resurrection in the Four Gospels, there are often confusing details and narratives that are difficult to reconcile. And why should this not be so? Can you even imagine the chaos that ensued when the reports of the Lord’s Resurrection began to spread across Jerusalem? It is no wonder that each Gospel presents a different point of view of the same events. But we still have to account for the Theotokos. Where was she on the morning of the Resurrection?

We hear a faint hint in the Resurrectional Ἀπολυτίκιον of the Plagal of the Second Mode. There is this phrase: ὑπήντησας τῇ Παρθένῳ, which means, “You went forth to meet the Virgin.” And it is a reference to the newly-Risen Lord.

What could this mean? There is a clue in another story of Scripture. In fact, the only story of our Lord’s childhood, when he was lost to his Mother and Joseph for three days, and then found in the Temple. We read this Scripture on January 1st – in between the Nativity and Epiphany – but it does speak to this Sunday of the Myrrh-bearers.

Maybe there is a reason this is the only story from the childhood of Jesus in the four Gospels.

Maybe there is a reason that the Virgin herself was the one to tell this story to Saint Luke; for they surely knew each other.

Maybe – just maybe – in her agony of grief and loss over the death of her Son on the Cross, and the rushed burial, she remembered that time – a time when she lost her Son for three days, when He was twelve years old.

All those years ago, she had found Him alive and well in the Temple. And even during His ministry, Jesus had said:

Destroy this temple and in three days I will raise it up. 2

But as the Evangelist comments:

Jesus was speaking of the temple of his body. 3

Perhaps the reason we do not see the Virgin at the Tomb with the other Myrrh-bearers on Pascha morning, is because she knew He would not be there. Perhaps, she had already encountered Her Son. For to whom else would the Lord go, if not to His Holy Mother? He was already gone by the time the stone was rolled away.

The other Myrrh-bearers became the “Apostles to the Apostles;” for they announced to them the Resurrection. But the Holy Virgin knew the Resurrection in her heart, even before the dawn arose.

May we also drink deeply of such faith, that we may join them in their joy at meeting the Risen One and cry aloud:

The Lord is risen, indeed!4