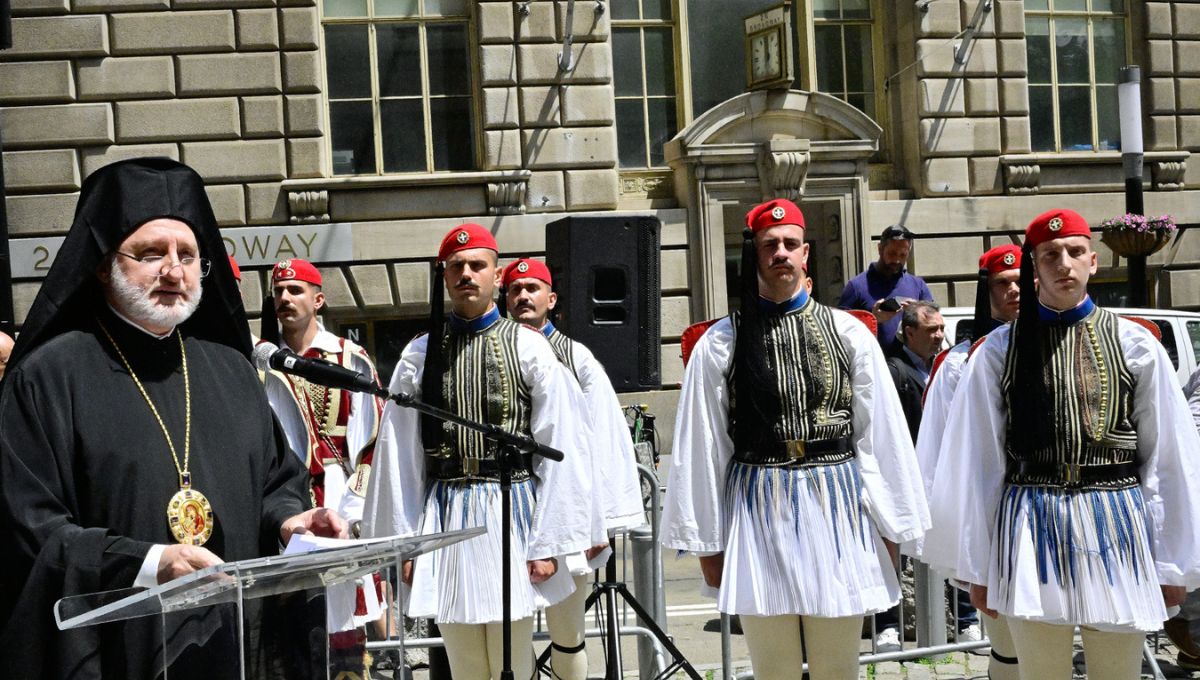 Distinguished Representatives of our Local Government,

Noble Officers and Soldiers of the Presidential Guard,

Honorable Members of the Federation of Hellenic Societies of Greater New York,

Once again, we gather here at Bowling Green to raise the flag that embodies democracy and liberty. And we do so in the presence of the Presidential Guard of the Hellenic Republic – an inestimable honor for this most honorable occasion.

As Greeks and as Philhellenes, we express our thanks the Evzones for their presence and participation that brings glory to this Flag-raising. By doing so, we manifest our shared aspirations of freedom and human dignity, as we pay worthy tribute to the Flag of the Hellenic Republic in honor of Greek Independence Day.

Last year was the Bicentennial of Greece, and it was observed around the world with great pomp and circumstance. This year is the Centennial of the founding of the Sacred Archdiocese of America as an Eparchy of the Ecumenical Patriarchate of Constantinople.

The bonds between all Greek-Americans and the Motherland of Greece are demonstrated here today by this solemn raising of the Standard of Greece, in the presence of the Evzones.

We can never forget March 25th; for it speaks to us both of our Faith and of our Freedom in a liberated Greece. Whether at this ceremony, or in the parade that we will proudly march in on Sunday, we will always remind the world around us and the younger generations of the sacrifices of the Immortal Heroes of 1821. Liberty is the most precious ideal. And it is nowhere better represented than by this Flag and the Noble Sons of Greece, who attend the flag today and honor us with their dignity and respect.

In hoisting the Greek Flag here at Bowling Green, we honor the Immortal Heroes of 1821. We honor Greece, and in truth, we honor ourselves. Because we remember, and we enshrine the Ἀγών of the Greek People in the New World, in the City of New York, by our act of faithfulness.

May we be ever worthy of the blessings of liberty, and manifest deep gratitude and appreciation for our homeland of Greece, which is so proudly represented here today by the elite Evzones.

May God bless you all!