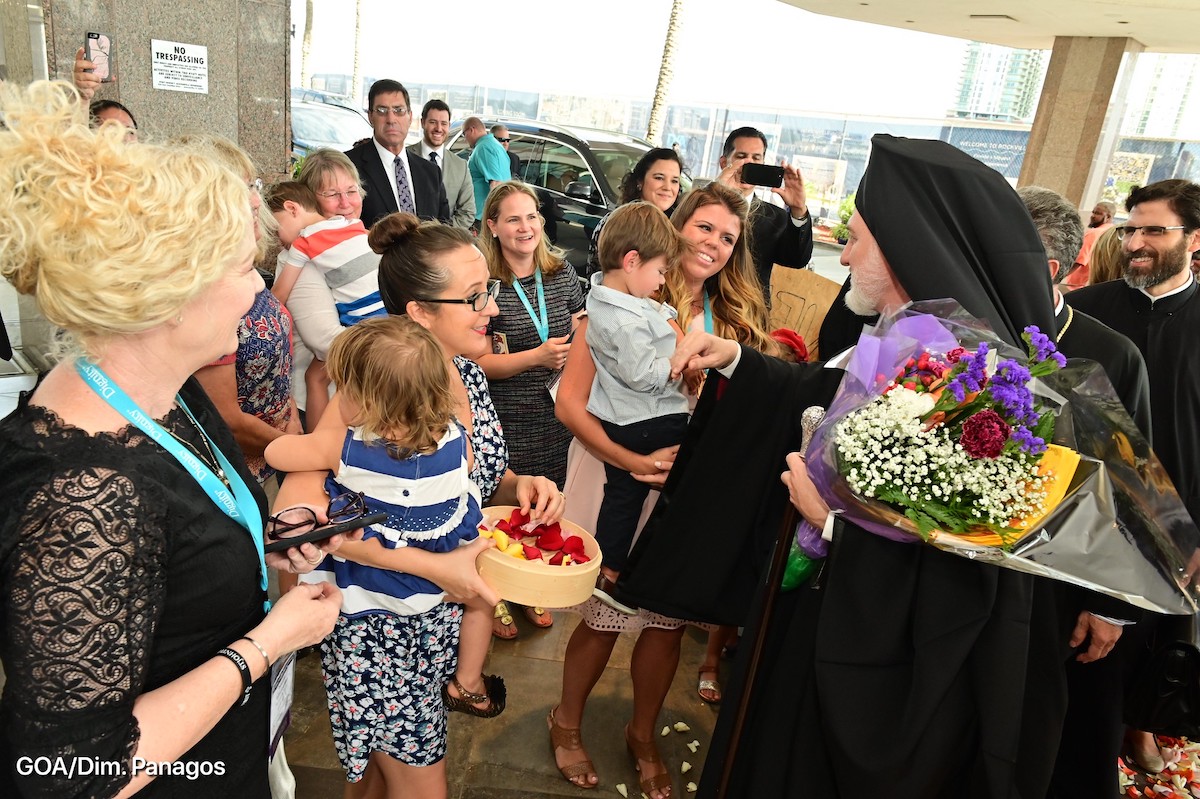 An Enthusiastic Welcome at Jacksonville, Fla.

JACKSONVILLE, Fla. – His Eminence Archbishop Elpidophoros of America travelled yesterday, June 28, to Jacksonville, Fla. where the Clergy-Laity Assembly of the Holy Metropolis of Atlanta is taking place June 25-29. The theme of the Assembly is “Go into all the world and proclaim the Good News to the whole creation” (Mark 16:15).

Upon his arrival, the Archbishop was first welcomed at the airport by Metropolitan Alexios of Atlanta and the lay leadership of the Metropolis.  Clergy, the Presvyteres, the members of Philoptochos, the Archons, the faithful participating in the conference and the children of the Jacksonville community gathered at the Hyatt Riverfront Hotel, and offered a warm and enthusiastic welcome to Archbishop Elpidophoros as he entered.

Archbishop Elpidophoros received a second enthusiastic welcome a little later, when he was officially announced and entered the Grand Banquet with a standing ovation, cheers and applause.

In his address to the participants he expressed his joy for their “dedication to ministry,” evident in the work the delegates of the Clergy Laity Assembly do and their “commitment to mutuality, to compassion, to family, to all the practices that engender spiritual health from the cradle to the grave.”

His Eminence further admonished the faithful participants of the Assembly to share the gifts they have received from God: “Whatever goodness of God that has manifested in our lives, whatever grace, whatever, as the Apostle Paul says: ‘is true, honorable, righteous, pure, lovely, gracious, excellent, or worthy of praise’ (cf. Philippians 4:8) – these are the very gifts that we can only keep, as we give them freely away. Because they are the product of grace, the free gift of God to each and every one of us.” (Read full text)

Metropolitan Alexios of Atlanta in welcoming Archbishop Elpidophoros said “It was the will of God to have you elected as our Archbishop here in America,” and at a later point stated: “As the Metropolitan of this Metropolis I pledge my commitment to continue to serve you and the Archdiocese in order to enhance our service to God and the people entrusted to our care.”

At the beginning of the evening, an inspirational greeting was offered by Shannon Miller, a seven-time Olympic Medalist. Greetings were also delivered by U.S. Congressman John Rutherford who exalted the high ideals that the Greek American community holds dear.