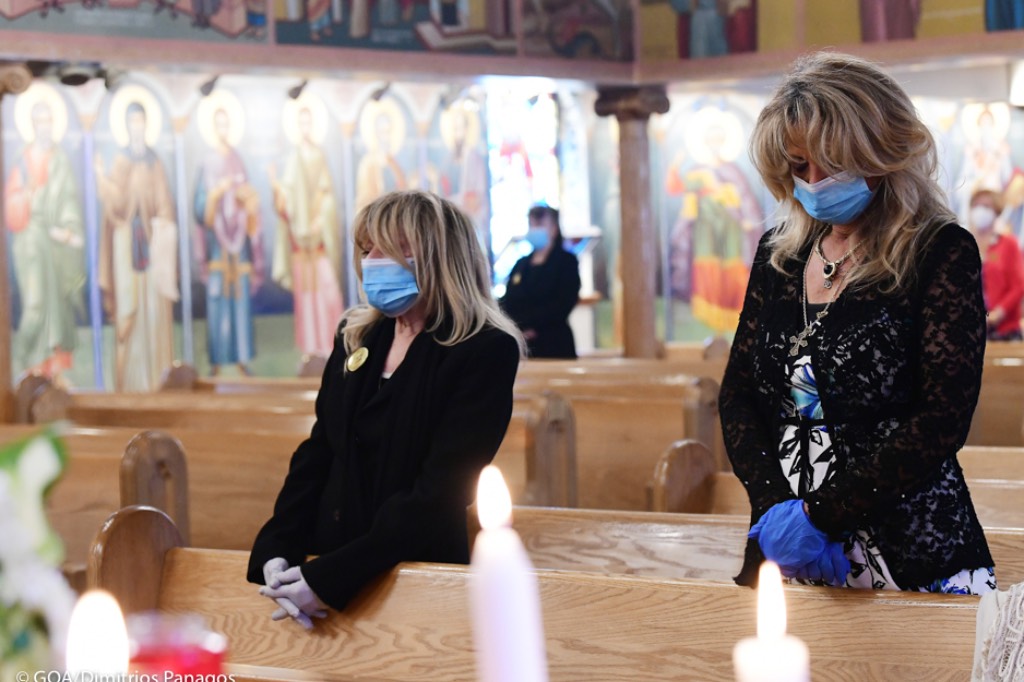 His Eminence Archbishop Elpidophoros Homily for the Liturgy of Ss. Constantine & Helen

Brothers and Sisters in Christ,

Christ is Risen! [and in response: Truly He is Risen!]

As you enter Ἁγία Σοφία, in the Vestibule over the South Door, you behold a magnificent mosaic that dates back to the Tenth Century.  Seated upon a throne, the Holy Theotokos holds the Christ Child. To her right, the Emperor Justinian presents the Church itself, Ἁγία Σοφία. To her left, the first Christian Emperor, Saint Constantine, presents the City – the walled miracle of history, Constantinople.

This remarkable history, and the marvelous story of the march of Christianity through time and space, is forever linked with Saint Constantine, and the City that he founded at the Greek town of Byzantion – flanked by the Bosphorous, the Sea of Marmara, and the Golden Horn – Κωνσταντινούπολις, the New Rome.

I feel a special connection to the “Queen of Cities,” and not only because I was born there. May Eleventh, the date of my Election by the Holy and Sacred Synod on the Nomination by Ecumenical Patriarch Bartholomew, is the very day on which we celebrate the Dedication of New Rome by Saint Constantine in the year 330.

As Orthodox Christians, without regard to one’s ethnic or linguistic background, the City of Constantine remains to this moment the source and the wellspring from which our Orthodox Faith flows.

It does not matter that the Roman Empire came to an end and was replaced by another.

It does not matter that even now we, the Ρωμιοί, are but a small minority in the City that was built as the Christian Capital of the entire known world.

What does matter … is that the legacy of this Christian Empire – incarnate in the sacred person of the Ecumenical Patriarch and the continuing diakonia of the Great Church – continues to this day.

What does matter … is that the Faith of the Seven Ecumenical Councils – the Faith that established the Universe – was articulated and codified for all time, from and in this Christian Capital of the whole world.

For thus, the City of Constantine remains to this day. Our Constantinople, our Christian Capital, is redolent still with the fragrance of sanctity and the glory of ages past. There have been inexpressible peaks, and there have dark valleys through the centuries, but the constant in Constantinople has always been the divine, God-appointed mission of the Great Church of Christ to lead the Faithful to the Kingdom of Heaven.

In the year 312, some eighteen years before the Dedication of Constantinople, on the night before the Battle of the Milvian Bridge in Old Rome – the battle where Saint Constantine united the Roman Empire in his own person – it is said that he saw the sign of the Cross and the words: Ἐν Τούτῳ Νίκα! “In This, Conquer!”

Thus, the future Saint realized that if he was to rule, it would be by the Cross of Christ, and a great reversal and transformation commenced. The Cross went from being the instrument of torture upon which our Lord Jesus Christ was crucified, to the symbol of victory, ὅπλον εἰρήνης, ἀήττητον τρόπαιον – the weapon of peace, the invincible trophy.[*]

We call the Cross a trophy in the ancient meaning, the heaping up of the weapons of a defeated enemy by the Victor.

Our Victor is Christ, and as his greatest earthly commander, Saint Constantine took the Cross upon which the Lord was hung and turned it into our greatest symbol of victory. With Saint Paul the great Constantine cries out:

Christ has indeed trampled down death by death! His death on the Cross, which has become the symbol of our victory!

Therefore, my beloved Christians, let us give thanks this day and every day for the gift of the City made by Saint Constantine. Long may his icon shine forth in Ἁγία Σοφία, and long may our precious and sacred Ecumenical Patriarchate illumine and lead our Church from the brilliant lighthouse we call, “the Phanar,” the truest legacy of the Christian Empire.

[*] Kontakion of the Universal Exaltation of the Holy, Precious, and Life-Giving Cross (September 14th).