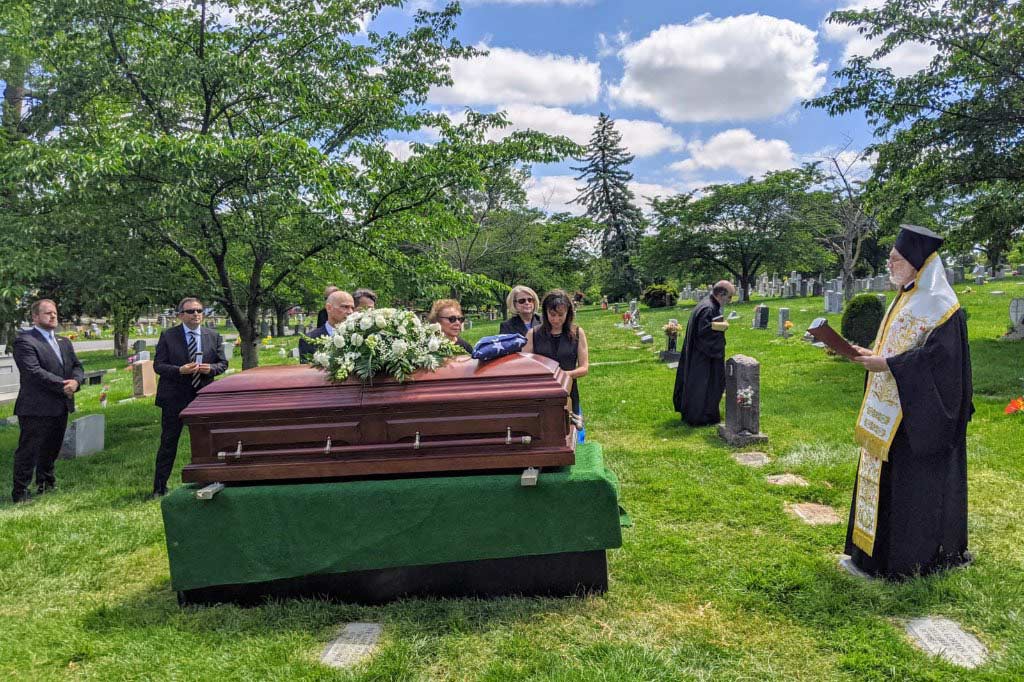 Brothers and Sisters in the Risen Christ,

As we gather here together today, a small yet devoted and loving συνοδεία to accompany this Lion of the Omogeneia to his final resting place, I cannot help but think of the thousands – and yes, tens of thousands around the world, who are joining their prayers, their respect, and their tributes to ours at this very moment in time.

A more εὐγενής ἂνθρωπος you could not find. Noble of heart, noble of soul, and noble in mind. He raised all those in his ever widening circles of influence to the very best that they could be. He inspired even as he led. And when he asked others to give to his noble cause, he gave of himself first.

But he was more than noble and an exemplar of altruism. He was a fighter, a warrior for truth and justice. He proved his willingness to enter into the arena of life early on at Columbia University, setting an athletic record that stands to this day.

But even more than the physical prowess and skill of his youth, he will always be remembered as the righteous hoplite who fought for Cyprus in its hour of need, and never, ever gave up the fight for justice.

In this, he was most true to his middle name, Telemachus, or in Greek, Τηλέμαχος, the “One who fights from afar.” He may have been an ocean and more away from the Homelands of Greece and Cyprus, but like the son of Odysseos for whom he was named, he traversed land and sea to fight for their cause.

Like Telemachus, he searched for his father-land, to bring it home to a state of fairness, equity, and human rights. His “Telemachy,” his Τηλεμάχεια was a lifelong pursuit of integrity, honor, and justice. All of us are better human beings because of his example.

Standing in the presence of his beloved wife, Aphrodite, and those closest to him who could be here today, I can only say that there will never be enough words, enough εγκώμια, enough tributes to express what the Omogeneia around the world feels as we say this fond farewell.

Gene’s life was long, productive, fruitful, and truly remarkable. His impact was extraordinary, far and above that of even the most exceptional of human beings. Because of this amazing life, our memories will remain full of his presence. And the sadness of this parting will ease with time, as we allow the healing love of God to remind us that if we possess someone in God, then we can truly never lose them. For we can never lose God.

Therefore, we say: Αἰωνία του ἡ μνήμη – Everlasting be his memory. His soul is in God’s hands, his memory is in God’s mind, and there he enjoys eternal rest in the mansions of the Saints and the tabernacles of the Righteous.

This Telemachus has found his Heavenly Father, and now the odyssey of his life goes on for eternity.