Archbishop Demetrios highlights the contributions and role of IOCC in Middle East Conference, in Athens

NEW YORK – His Eminence Archbishop Demetrios of America participated in the proceedings of the international conference titled Religious and Cultural Pluralism and Peaceful Coexistence in the Middle East, organized by the Ministry of Foreign Affairs of Greece, October 18-20, 2015, in Athens. 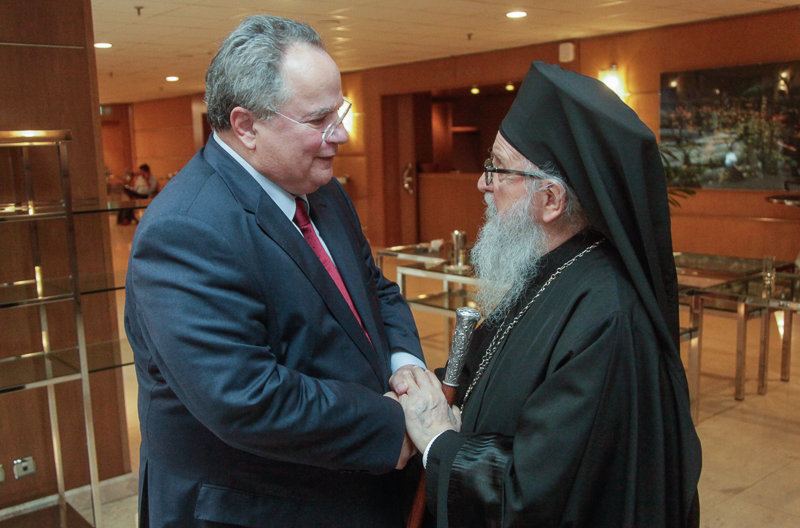 In his address, Archbishop Demetrios, emphasized the aspect of humanitarian aid in response to the crisis that flared up in the Middle East and spreads in Europe and around the world. He highlighted the contribution and role of IOCC (International Orthodox Christian Charities), which is the official humanitarian agency of the Assembly Canonical Orthodox Bishops in the United States. (see full text below).

Archbishop Demetrios attends the meetings of the International Conference

His Eminence said the initiative of the Greek Government and the Ministry of Foreign Affairs in organizing the international conference was very important and an opportunity for understanding and conciliation in a terribly difficult landscape.

Archbishop Demetrios of America converses with Patriarch Theofilos of Jerusalem

He noted that the presence and participation of the Primates of the Orthodox Churches led by Ecumenical Patriarch Bartholomew and the participation of other leaders and key personalities from the Middle East region indicates the degree of urgency for action and gives us hope for immediate and effective response.

“The Christian element is diminishing in the area and this is a disturbing development,” Archbishop Demetrios said in another statement and, noting the drastic reduction of the Orthodox population in the Middle East in recent years, emphasized the need for measures to prevent and avert the long-term consequences of conflict and demographic and cultural changes in the region.

Statement of His Eminence Archbishop Demetrios of America

Religious & Cultural Pluralism and Peaceful Coexistence in the Middle East

When invited to gather with brothers and sisters, friends and colleagues from around the world to celebrate a joyous occasion, I am certain that all of us would very much welcome such an opportunity.  Our present meeting, however, is brought about by an ongoing crisis in the Middle East and a sense of urgency to respond to the huge humanitarian crisis.

The Middle East, a distinguished georgraphical area of religious and cultural pluralism for at least 4000 years has unfortunately experienced unprecedented levels of violence for a number of decades. This fertile land, which has served as the cradle of so many civilizations, is being poisoned by fear, hatred, and violence. The tragic result of such conditions has been the mass extinction of local communities that have peacefully coexisted with their neighbors for centuries. Whereas in the past it was not uncommon to find villages, town and cities comprised of people of various religious beliefs and cultural traditions, today people are being taught to view their neighbor with suspicion.  Those who refuse to change their way of life are persecuted, executed, or forcefully evicted from their homeland.

These conditions have now ushered in a fractured image of the Middle East, one where people are forced to exist within prescribed borders that define one’s identity according to differences rather than according to the plethora of principles held in common for generations. The reality of the pluralism that the Middle East has exemplified for generations, has been transformed into a chaos and even to the destruction of global heritage sites whose importance has been recognized by the entire world.

What we have in front of us, therefore, is nothing short of a humanitarian crisis of unprecedented proportions. There are some who call the conditions on the ground genocide. Allow me to say, however,  that this genocide does not discriminate only against a particular religious group since we know that people of all faiths are being persecuted. Perhaps, in addition to acknowledging this crisis as genocide, we might best define it as memorycide, that is, the massive erasure of the history of local communities from the collective memory of the world.

Of course, we can blame the media and external forces for projecting a distorted vision of the Middle East, one which presents the region as the historical land of a particular religious community alone. However, we must ask ourselves how much we have invested in educating our own communities; how much we have engaged partners of other religious convictions that are prepared to paint an authentic image of the region the way it has been for more than 4000 years.

We are certain that the Middle-East crisis will not be solved with more bombs and mortars. Diplomacy and extended sincere dialogs are useful tools.  However, when viewed in isolation, diplomacy’s effectiveness is quite limited. What we know is that a humanitarian crisis can be effectively handled mostly through humanitarian relief. Please allow me at this point to offer a specific example.  I am referring to IOCC, the International Orthodox Christian Charities, which is the official humanitarian agency of the Assembly of Canonical Orthodox Bishops of the United States.  IOCC has provided humanitarian relief to 3.1 million Syrian people displaced in their own country or living as refugees in Jordan, Lebanon, Iraq and Armenia. By building capacity and trust in the region, the IOCC has distributed over $50 million dollars worth of aid to address the humanitarian crisis in Syria. Through careful planning and responsible distribution of these funds, the IOCC has provided internally displaced Syrians and refugees with distributions of food, clothing, hygiene kits, bedding, cooking supplies as well as providing maternal and infant health, emergency nutrition assistance, psychosocial support, education support, shelter rehabilitation and repair, and it has also worked hard to reduce public health risks.

Most importantly, the IOCC has administered its humanitarian relief projects without discriminating against one’s ethnicity, race, gender or religion. This has helped bring members of conflicting communities back together. Together with the Department of Ecumenical Relations of the Greek Orthodox Patriarchate of Antioch and by the grace of God, the humanitarian work of IOCC represents a tangible example of how our efforts can be effective in dealing with the crisis.  It also helps bring to mind once again the fact that the Middle East is the land with a superb history of cultural and religious pluralism. An exceedingly precious pluralism that has to stay there forever.