Print An Era Draws to a Close 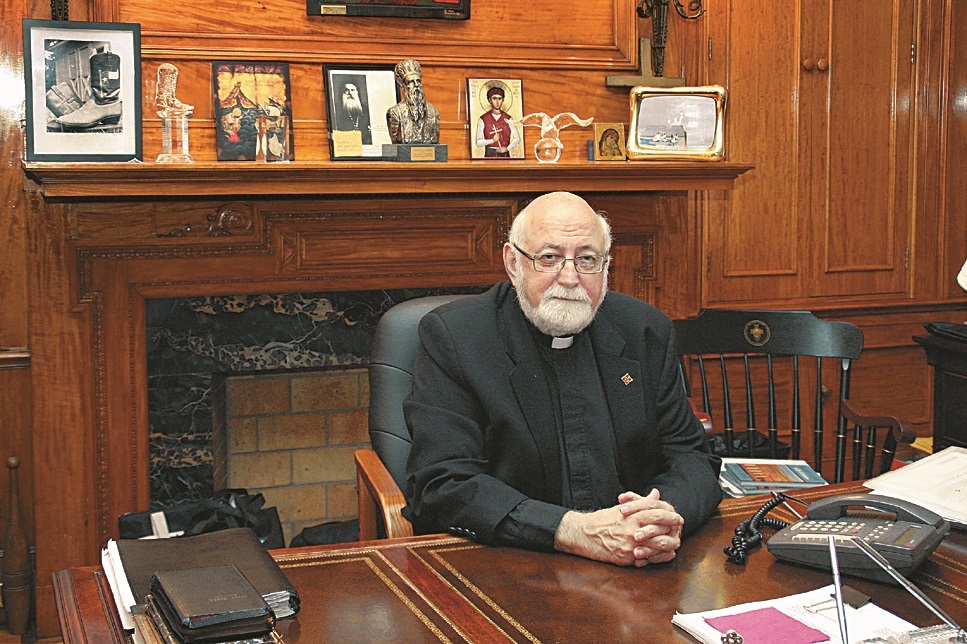 If anyone comes close to fitting the description that St. Paul ascribes to himself in his First Letter to the Corinthians (ch. 9, v. 22) of becoming “all things to all men,” it could be Fr. Nicholas Triantafilou, president of Hellenic College Holy Cross School of Theology.

“Fr. Nick,” a priest of the Archdiocese more than 50 years, has served as HCHC president for the past 15 years, the longest tenure of anyone in that position and will retire at the end of this academic year, albeit reluctantly. A serious freak accident two years ago that greatly aggravated two spinal and neck injuries he suffered as a young man led to his decision last fall to leave at the end of the year. In March 2013, Fr. Nick was on an upward moving escalator at LaGuardia Airport for a flight to Ohio where he was to give three talks when a heavyset man in front of him fell backward with his luggage, causing him to fall back onto the moving steps.

The fall aggravated a football injury he suffered in 1954 at age 16 while playing linebacker for the Woburn (Mass.) varsity football team, where he served as captain, and another similar injury he sustained playing soccer in 1961 while a seminarian at Holy Cross.

In the first injury, he wore a neck brace four months. He was in a body cast five months after the soccer mishap. He eventually recovered and completed an M.A. degree at the school. His first assignment was as assistant priest at St. Vasilios Church in Peabody, Mass., serving under Fr. Stanley Harakas.

“I learned much from him,” said Fr. Nick. “It was a rich experience and I consider myself very fortunate for the two-and-a-half years I served under him.”

His next assignment was at Annunciation in Houston, serving as the second priest under Fr. George Kalpaxis for six months, then as interim priest in the transition period when the church was designated a cathedral in 1968, when he became dean.

While in Houston, he earned his M.Div. degree at St. Thomas University.

Two years later, Fr. Nick and Presbytera Diane achieved one of their proudest accomplishments, the founding of Annunciation Orthodox School.

What prompted them to establish the school was the challenge of life in the South to young people of Greek Orthodox background. “We felt that we had a rich heritage, educationally, as Greek Orthodox and Houston was a young city with many young people in the community,” he said.

Initially the grades were pre-school and Kindergarten. “People wanted more and we continued up to grade six.” The school now goes up to 8th grade.

Also during his time in Houston, Fr. Nick was named as the first National Stewardship director on a part-time basis and he traveled the country to promote the program

Concurrently, he helped to establish two parishes in Texas. “The (Annunciation) parish council was very supportive of the effort to expand the number of parishes in Texas,” he said. The cathedral had a second priest which facilitated Fr. Nick to do the extra traveling. In 1981, he helped restart St. Nicholas in El Paso, which had been active before World War II. In the mid–‘80s, he helped found Transfiguration Church in Austin.

Archbishop Iakovos named Fr. Nick as full–time vicar general of the Archdiocese in 1987, while continuing his Stewardship duties. For the next several years, he worked with clergy and their families in working out problems and planning their careers.

He went on to serve as the Archbishop Iakovos Leadership 100 Endowment Fund’s executive director, chancellor of the Archdiocese, dean of Holy Trinity Cathedral in Charlotte, N.C., and, prior to becoming school president, as the first director of the youth camp established by Metropolitan Methodios in Contocook, N.H., which Fr. Nick expanded into a retreat center.

Since becoming president of HCHC in 2000, he has initiated many programs and enhanced the school’s operation. The benchmarks listed in the accompanying box highlight the most significant of these.

Over the years, he has implemented administrative, curriculum, financial, personnel and other changes, along with wide-ranging improvements to the infrastructure.

The most notable change has been in combining the schools into one, as Hellenic College Holy Cross.

“It shows that we have one goal, one scope,” the president said. “The college and graduate school form people spiritually, and the graduate school carries through much of the teachings of the college.” He added, “The deans of both schools are superb.” Recruiting of students has been stepped up to the point that “the numbers will grow significantly in September,” the beginning of the new academic year.

Since 2000, enrollment in the college has increased by 79 percent, from 47 students to 84 this year. Holy Cross experienced a 40 percent increase, going from 68 students then, to 95 now.

Financially, the school also has experienced improvement. “Finances are coming into shape and there is significant movement forward,” said Fr. Nick, who acknowledged the significant donations from Leadership 100, the National Philoptochos Society and many individual donors. “Leadership 100 has been giving more than $1 million a year. We never could have done this without their support,” Fr. Nick said. “Philoptochos, as well, has contributed an enormous amount of money.”

Fr. Nick noted that, as a result of the support given to the school, “education here is equal to any school in the country.” HCHC is accredited by the Association of Theological Schools in the United States and Canada and by the New England Association of Schools and Colleges.

He added, “The school has had some magnificent presidents before, I’m just building on what the past presidents and deans have put in place.”

Being in excruciating pain the past two years has severely limited his ability to work. Now at age 78, on the advice of his doctor, he spends a few hours at his office two or three days a week and also does work from his home in North Andover, Mass., about half an hour’s drive north of Boston. He also attends weekly physical therapy sessions. As for his post-retirement plans, Fr. Nick hopes to continue some involvement with the school. “If the school requests anything from me, I’m available as a volunteer to the extent that my health will allow.”

REFLECTIONS BY THE DEANS
HCHC’s deans, James Skedros of Holy Cross and Dimitri Katos of Hellenic College noted the impact that Fr. Nick has had on the institution, and its students.

“What Fr. Nick accomplished was the vision of th whole school for the whole Church; a college and a school of Theology working together to support the Church,” said Dean Skedros. “This is not just another secular college or seminary,” he continued. “It is a school of theology preparing clergy and lay leaders, and a college preparing leaders for the Church.

“These kids come here, they’re shaped and formed and go back to help run their churches and witness to Christ,” he continued, adding, “Fr. Nick has always seen a role here for women, and men not seeking ordination.”

“Fr. Nick’s vision is to serve the needs of the Church,” added Dean Katos. “He is a model of what it means to be a pastor to future pastors. Spiritual formation is what makes us distinctive and what HCHC is about.” Both deans noted Fr. Nick’s “hands-on involvement” with the spiritual formation of the students, to the point of serving as their pastors, hearing confessions and interacting directly with students as much as possible.