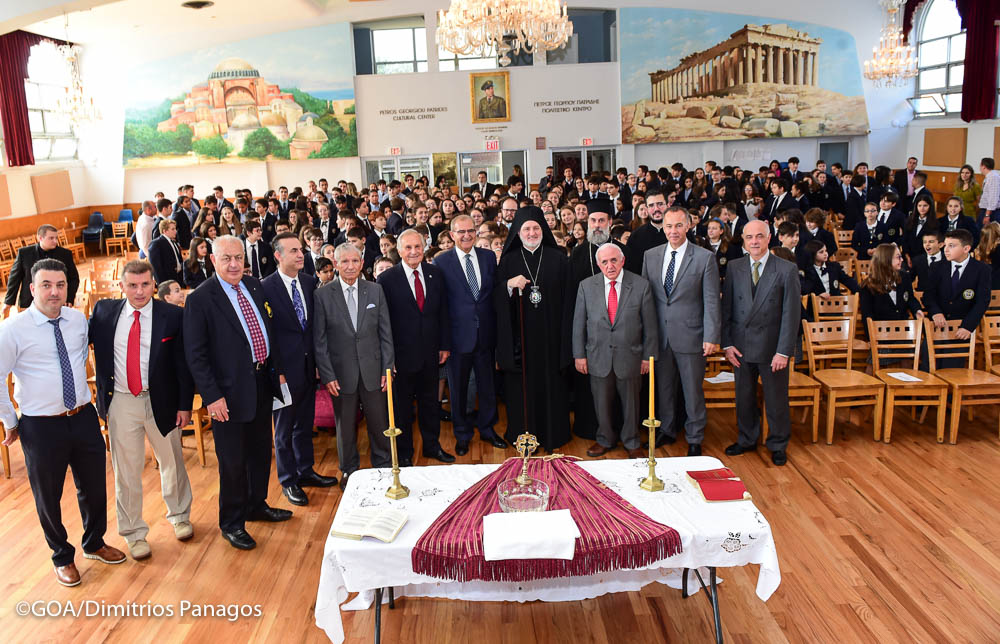 The Archbishop was greeted by the Deputy Minister of Foreign Affairs of Greece Antonis Diamataris, the Dean of St. Demetrios Cathedral V. Rev. Archimandrite Nektarios Papazafiropoulos, priests of the community, the President of the parish council Mr. Emmanuel Dritsas and other members of the parish council, the Chairman of the School Committee Mr. Nikos Andriotis, students, and teachers.

After the ceremony of Agiasmos, the Archbishop spoke to the children in a simple but illustrative way about the two large paintings of the Parthenon and of Hagia Sophia adorning the auditorium walls.  He said that the images demonstrate their Greek-Orthodox identity, which consists of two pillars of Hellenism represented by the image of the Parthenon and Orthodoxy represented by Hagia Sophia.  The Archbishop told the children that, “Hagia Sophia is located in Constantinople where our Ecumenical Patriarchate is, which is our Mother Church and which is our second identity. We are Greeks and Orthodox and Hagia Sophia and the Parthenon make up our identity as we have in our heart both Athens and Constantinople.”

The Archbishop also urged the children to remember the portrait of their school benefactor, Petros Patrides, that adorns a central wall of the auditorium, representing and symbolizing the course of Hellenism in America and the contribution of many leaders and benefactors in building our churches and our schools.  Archbishop Elpidophoros said, “But we are here in America, and we follow the example of people like Petros Patrides who built schools and chuches. We are American citizens - citizens of this great and free country. At this school, these talented teachers who teach you about your identity are building your future. Your future is bright because you have two strong elements in your heart, the Parthenon and Hagia Sophia. With these two strong elements within you, no one can stand in the way of your life.”

Upon the completion of the ceremony Archbishop Elpidophoros, asked to comment on his visit to St. Demetrios School, made the following statement to the Press:

“Today, I am a happy Archbishop. It is another glorious day of ministry in the Holy Archdiocese of America. The presence of these children, their smiles, their vitality, the noise they make revitalize Hellenism in America. These children also give hope to our Archdiocese that our Hellenic culture, our language and our Orthodox faith are alive. All of these are embedded in the hearts of these children, who have taken on the heavy burden of passing on the values ​​of Hellenism and Orthodoxy to future generations; and illuminating the future of the Omogeneia and Hellenism in this country. I am very happy because this school is a successful school. It is no coincidence that this first day begins with the presence of both the Archbishop and the Greek Minister Mr. Diamataris, who is “flesh from our flesh,” here, from America. This gives us a distinct perspective for the future. It demonstrates the importance the new Greek Government attributes to Hellenes abroad. It is a sign that everything will go well, our cooperation will be fruitful, vigorous and hopeful.”

Responding to another question about the importance he places on Greek education in the US, Archbishop Elpidophoros stated:

“The concern of parents is understandable as it is also my own concern; it is a common anxiety of all those who deal with things related to the Omogeneia here in America. As long as there is consensus, and as long as there is good cooperation, we know that we as Greeks can do many things. Things that, at first glance, seem impossible or unattainable, we can do.

I would like to offer an example: the great success of our Ecumenical Patriarch, who opened schools in Imvros, Turkey, where there was not even one student. Never mind a school, there were no children. But though His All-Holiness’ persistence, his patience, and his steadfast will, he has managed to bring in children, and today we have not just a school: we have elementary, middle and high school. Where? In Imvros. Much more especially here in America, where we have children, we have opportunities, but we also have the will and the unity and the cooperation. Therefore, we believe that God will bless our efforts and give us the same miracle that He gave to our Patriarch.”