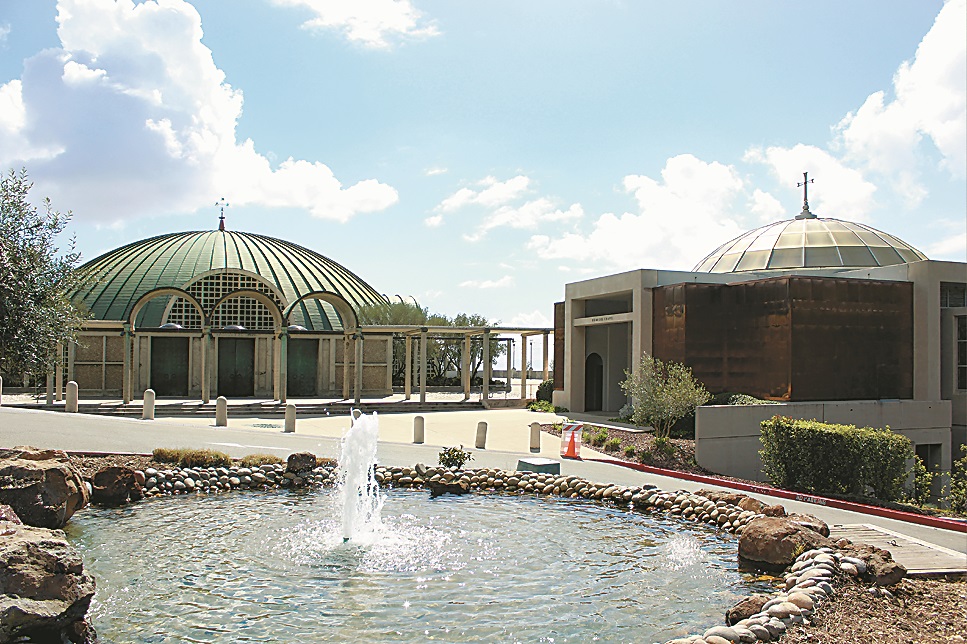 OAKLAND, Calif. – Feeding the hungry, clothing the naked, visiting the sick and more form the basis of Assumption Cathedral’s outreach to the community.

According to information from Fr. Zaferes, the parish’s meal ministry on the second Sunday of each month prepares and distributes between 15 and 200 meals to homeless people on the streets.

On Thanksgiving Day, about 1,000 meals are taken to hungry people in Oakland, to homeless shelters; or others having needs. He also said the parish is working to expand its efforts by working with an organization called Missions to the Homeless; which provides blankets and other essentials to the poor.

The Philoptochos chapter works with the local Covenant House, by helping to provide clothing. Additionally, the parish also supports the George Mark Children’s House of Oakland, a hospice nurtures dying children, It was the first freestanding pediatric palliative care facility in the United States and gives terminally ill children and their families a peaceful place to say goodbye.

Within the Church, the cathedral supports the International Orthodox Christian Charities with fund-raising dinners for more than 20 years, holds fund-raisers in support of HCHC seminarians and the various ministries of the Metropolis of San Francisco, especially the Philoptochos.

Along with regular youth activities such as GOYA, more than 100 children take part in the dance ministry. Dance groups compete in the annual Metropolis of San Francisco Folk Dance Festival each February.

There is a GOYA summer camp that has been held every year for the past 44 years in Humboldt County about 250 miles to the north. It takes place over a nine-day period with 90 kids taking part.

Sunday school has about 140 students; the Greek school between 45 and 55.

However, the parish also offers adultlevel Greek. A retired admiral and psychiatrist from the Greek navy, Dr. Alexandros Kokkinidis and his wife; Eftychia; a philologist and teacher, conduct “Greek for Travelers” classes for adults and children planning to travel to Greece who are not fluent speakers, and classes in Greek culture and Hellenistic Greek for interested parishioners.

Ascension Cathedral draws its members from throughout the eastern shore of San Francisco Bay, the area between Castro Bay and Concord. The geographic expanse does present some problems, Fr. Tom noted. “We’re so spread out, and with some of the worst traffic in the world, it’s hard for people to get here in the evenings for programs,” he said. “We’re trying to use our Sunday time better.”

Fr. Tom, a Cincinnati native who previously served St. Sophia Church in San Antonio, holds Bible studies every Tuesday morning and also twice a month at a small restaurant in a community outside of Oakland. He also plans to offer adult religious education classes before and after the divine liturgies and “go to areas where people live” to better minister to them.

Fr. Tom’s assistant, Fr. Ninos Oshanna, takes part of the responsibilities in serving the faithful. Fr. Ninos, a native of Baghdad, Iraq, and of Assyrian ethnic background (yes, the ones who carried away the 10 Tribes of Israel in the 8th century BC), had moved to Germany with his parents as a child, then relocated to San Jose, Calif., where he grew up in St. Basil Church.

The priests receive strong support from the lay leadership of the parish. “The leadership here is amazing,” said Fr. Tom, “they are very dedicated to their church.

He also credits his predecessor for offering his help and support, Fr. Tom Paris, who served as pastor for 38 years before retiring in 2009. He still assists where needed.

According to a parish history, the first Greeks to settle and open their own business in the Oakland area arrived in the 1890s or sooner. They came mostly from the Peloponnesus, Asia Minor, Macedonia and, in recent decades, from Cyprus. Being a major port city, the shipping industry attracted many of the first Greeks to Oakland, now a city of about 500,000 and nearly 60 ethnic groups.

Before establishing their parish, Greeks rode the ferry boat to San Francisco for Orthodox services at the Holy Trinity Orthodox Cathedral, established in 1872 under Russian imperial patronage for the Diocese of the Aleutian Islands and Alaska.

Previously, Orthodox chaplains from ships anchored in the bay would hold services at the “Greek Russian Slavonian Orthodox Eastern Church and Benevolent Society.”

In 1905, Holy Trinity Greek Orthodox Church was built in San Francisco by the increasing number of Greek settlers in the Bay Area; and Greek Orthodox clergy were assigned permanently.

Then, in 1906, the great San Francisco earthquake struck, devastating much of the city and resulting in many Greeks moving to the Oakland area.

By 1914, Greeks with Syrians (and Lebanese) celebrated Divine Liturgy in a rented hall in Oakland with a priest coming from San Francisco to officiate.

The State of California chartered the “The Hellenic Community of Oakland and Vicinity” on Feb. 16, 1917. (The parish will formally celebrate its centennial in the fall).

Four years later, on May 21, 1921, Oakland’s Greek Orthodox Church - the first in the East Bay area – was dedicated in the downtown area with more than 250 people in attendance as the Koimisis (the Dormition of the Mother of God).

Adamantios Koraes Hall, built in part by volunteer labor in 1932, served as a community center and provided space for classrooms.

Eventually, the community outgrew these facilities and the original property and building were sold in 1960, in favor of the site of the new church building on a fiveacre site in Oakland Hills and dedicated to the Analypsis (the Ascension of Our Savior).

Slated for demolition in 1976 to make way for an interstate highway, the building was rescued by a very small group of dedicated individuals who later established the Ascension Historical Society.

They found that the old church building met national and state criteria for architectural and cultural significance and had it listed on both the U.S. National Register of Historic Places and the California State Register as a landmark. The building was relocated for preservation by the California Transportation Commission.

The new complex and change in status

The present Cathedral of the Ascension, that combines modern and traditional elements, opened its doors Dec. 11, 1960. In subsequent years, an educational building and community center have been added. As a result of the San Francisco-Oakland earthquake of Oct. 17,1989, also called the Loma Prieta earthquake, that struck during the third game of the World Series between the Oakland Athletics and San Francisco Giants, Annunciation Cathedral was heavily damaged and rendered unusable.

Metropolitan Anthony relocated to Oakland and elevated Ascension Church to cathedral status in 1992. The new San Francisco cathedral is still under construction.

In recent years, construction began on the Koimisis Chapel, which is nearing completion. Parish membership spans several generations. More than half of its income is derived mostly from stewardship, supplemented by the annual Greek festival and rent from a Montessori school on the property and the parish hall. Fr. Tom said non–profit groups renting the hall only pay for its operating cost.