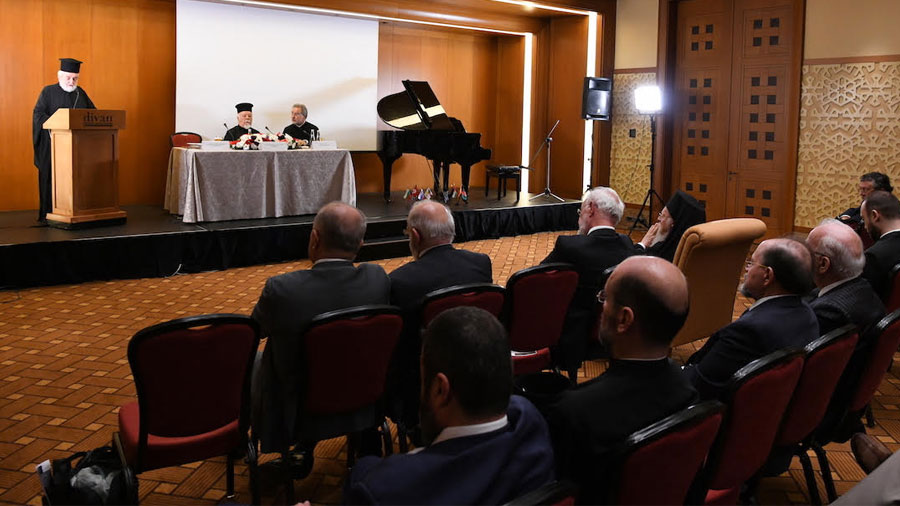 Ecumenical Patriarch announced the opening of the proceedings of the International Theological Conference on “The Theological Legacy of Protopresbyter Georges Florovsky” on the afternoon of Sunday, September 1.

“We greet you with delight and joy and welcome you cordially to the City of Constantine and the historic Center of Orthodoxy, to commemorate the fortieth anniversary of the passing of Protopresbyter Georges Florovsky, a preeminent figure of the Church and of Theology, a great scholar of Patristics, a professor and writer, a renowned theologian and, according to his disciple Metropolitan John of Pergamon, an “ecumenical teacher,” very great and precious to the Church of Christ, to its good witness in our day, but also to the Ecumenical Movement and the thriving presence of the Orthodox Church in it,” remarked His All-Holiness, addressing the hierarchs, clergymen, and distinguished university professors participating in the conference, which was organized by the Ecumenical Patriarchate in cooperation with the Patriarchal Institute for Patristic Studies in Thessaloniki.

“The work of Protopresbyter Georges Florovsky is and will continue to be the inspiration and direction of theological work for generations to come. A central focus of Florovsky’s thought and witness was the ‘creative return to the Fathers,’ for the proper understanding and application of whom he spent more than fifty years engaged in theology,” the Ecumenical Patriarch noted, while elsewhere in his speech he stated: “A crucial factor in the history and identity of the Church and theology is, according to Florovsky, the conjunction of Hellenism and Christianity, whose main contributors belong to the choir of the great Greek Fathers, who, he writes, succeeded in expressing in the best terms and without minimalist harmonization, with the tongue and terminology of Greek philosophy, ‘an entirely new experience.’”

In his speech, the Ecumenical Patriarch referred to Protopresbyter Georges Florovsky’s contribution to the Ecumenical Movement. “Engaged in inter-Christian dialogue, he played an important role in the founding and development of the World Council of Churches, studying the works of Western theologians, carrying on discussions with them, referring without hesitation to their texts and highlighting the value of the Fathers of the Church for discovering and realizing the common heritage of Christians. According to Florovsky, all Christians ‘somehow belong to the same spiritual space.’ It is not about ‘parallel traditions,’ but about a single tradition that has failed and broken down. There is an ‘original affinity for the common past,’ which we must always remember. [...] East and West are parts of a Christian world that, according to God’s plan, ‘should not have split.’ ‘The tragedy of division is the biggest and most critical problem in Christian history.’ If this is understood, then there are reasonable hopes for the restoration of Christian unity, His All-Holiness said among other things, referring to the theological positions of Florovsky, and elsewhere in his speech he emphasized: “This has been the spirit of the Ecumenical Patriarchate throughout its long involvement in the Ecumenical Movement, not as a mere partner, but as one of its founders. Without theological minimalism, we approach the Orthodox Tradition in its historical reference to the rest of the Christian world, in common with Protopresbyter Georges Florovsky, and affirm that that ‘all the possibilities of the Orthodox tradition can be revealed and realized only in the context of permanent contact with the entire Christian world.’ We believe that official inter-Christian theological dialogues are reinforced by the contribution of Theological Schools and academic discourse, by the ‘dialogue of life’ in the daily life of Christians, but also by communication and meetings of Church leaders and congregations. More generally, we believe that the Ecumenical Movement has released noteworthy creative forces in the Christian world.”

Continuing his speech, the Ecumenical Patriarch underlined the importance of formulating the message of Orthodoxy in the modern world.

“The message of Orthodoxy is too true to stay on the sidelines of the debate on the big contemporary questions and problems. […] It requires study, extensive theological work, a ‘quick mind’ and a ‘pure heart’ to reveal to us the richness of Patristic wisdom, to find the answers to many misunderstandings of Orthodox teaching that are circulating inside and outside of Orthodoxy today. Of particular interest is the fact that those positions that portray Orthodoxy as closed, ethnocentric, with no real interest in dialogue with the Christian world or in meeting modern culture, are presented by those outside as criticism, and by those inside as a characteristic of genuine Orthodox thought and faithfulness to the tradition of the Fathers. 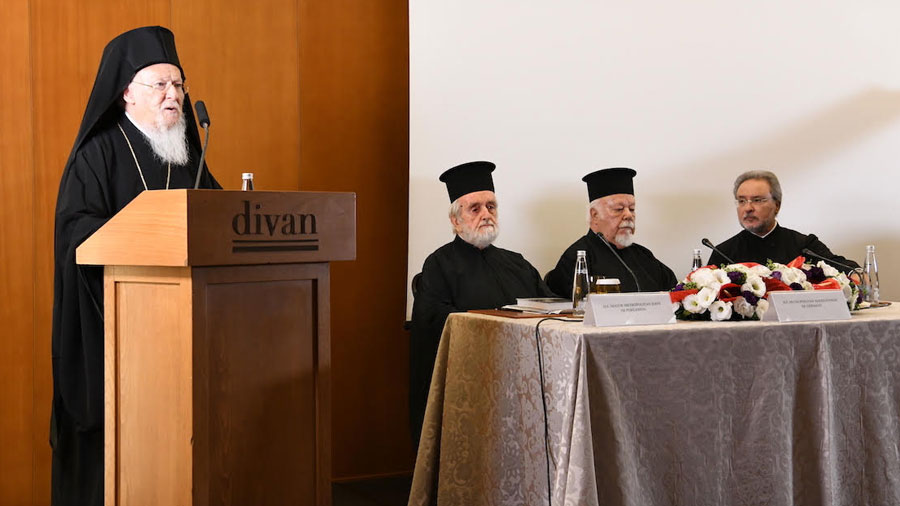 “In the face of all these challenges, we all understand the importance of the unity of Orthodoxy and the common Orthodox ecclesiastical and theological witness. We live with strong disagreements between the Orthodox Churches on the subject of the Church’s relationship with the modern world. We have survived, but we have seen how fragile Pan-Orthodox unity is in the case of the convening and realization of the Holy and Great Synod of Crete, as well as on the question of Ukrainian autocephaly.

“Unfortunately, the eucharistic and eschatological identity of the Church today is threatened not only by the spirit of secularism, but also by tendencies of spiritual and religious infertility within the body of the Orthodox Church, as well as by tensions in inter-Orthodox relationships.”

Concluding his speech, His All-Holiness emphasized:

“The instrumentalizing of the Divine Eucharist and its conversion into an exercise of ecclesiastical politics and pressure reveals an alienation and departure from the basic principles of Eucharistic ecclesiology, which, together with the ‘Return to the Fathers’ and its associated development of the theological anthropology of the person constitutes the decisive contemporary contribution of Orthodoxy to Christian theology and spiritual culture. Professor Christos Yannaras recalls that Protopresbyter Georges Florovsky in his work ‘Paths of Russian Theology’ describes the course of Russian Christianity after the conquest as “alienation from the Hellenism of the Fathers,’ as a gradual rejection of any ‘remnant of Hellenism’ in its ecclesiastical experience, which amounts to a departure from the ‘logic of Orthodox ecclesiology’ and the linking of the patriarchal status granted to the Russian Church with the ‘ethnic ambition for power autonomy.’ To the Greek, ‘spiritual universality’ is seen by Giannaras embodied and expressed in the supranational institution of the Ecumenical Patriarchate, which ‘represents a possibility of life at all times.’

“The ecclesiastical functionality of the supranational character of the Ecumenical Patriarchate is also explained by the Metropolitan John of Pergamon, who says: ‘The nature of its ministry and its purpose is to serve all Orthodox, regardless of nationality, race and language, and therefore it must not be associated with places and environments that are narrowly ethnic. Divine Providence has put it where it is, so that no one can question and challenge its supranational character, on the basis of which it is called upon to play a decisive role in our day.’ Solving the current problems of Orthodoxy can only be achieved with absolute faithfulness to the tradition of the Church and the application of theological, canonical and ecclesiastical criteria. If the East and the West cannot, as Florovsky argues, exist as independent units, it is inconceivable that the Orthodox Churches would function as self-sufficient entities without undermining the core of ecclesiology and the vital principle of fellowship.”

This was followed by a detailed speech by Metropolitan Geron John of Pergamon, Honorary Chairman of the Conference.

It is recalled that Protopresbyter Georges Florovsky was an innovative theologian and professor, and has been described as the “Rector of the Orthodox Theologians” of the twentieth century. His inspired appeal to theologians to return to the wellsprings of the Fathers and to cultivate the spirit of the Fathers, as well as to the Church to be involved with the powerful historical and ecumenical challenges of our time, have been a landmark for Orthodox theology and have influenced Christian thought to this day.

You can follow the Conference’s work with the help and support of pemptousia.gr, through the Ecumenical Patriarchate and Pemptousia pages on FB