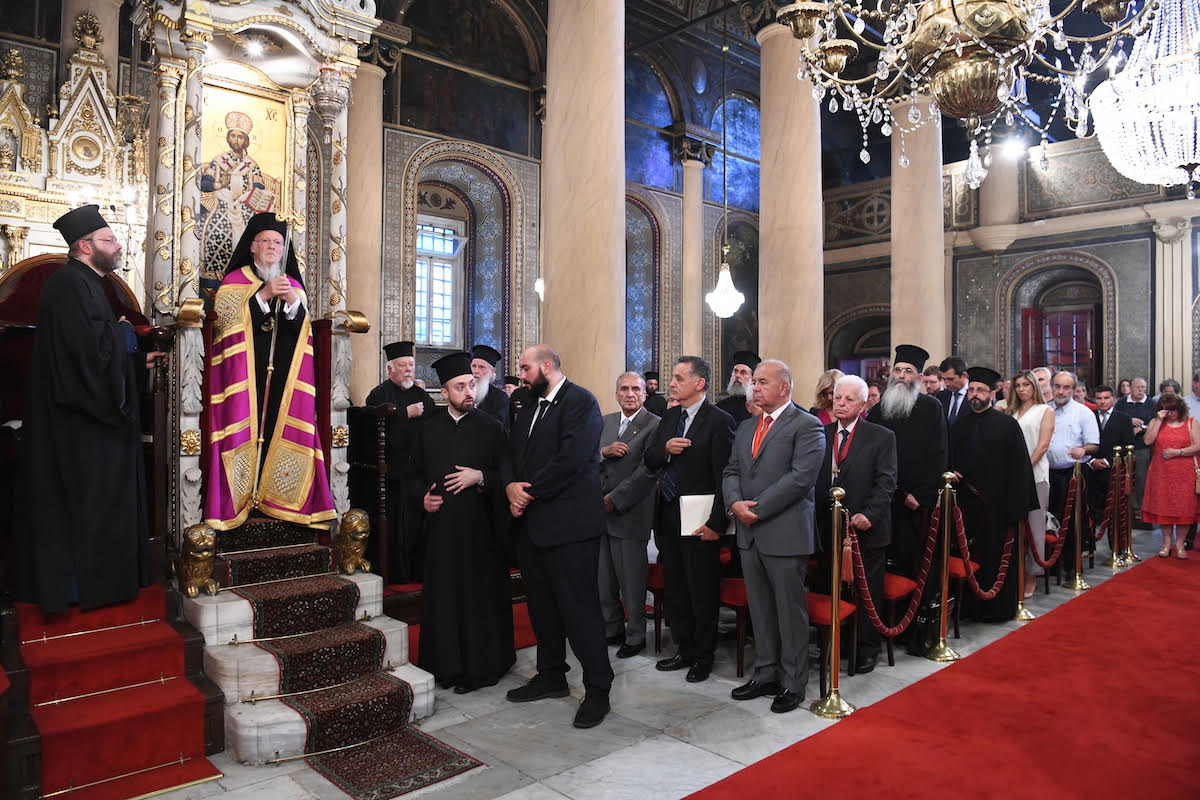 The Ecumenical Patriarch Bartholomew honored the distinguished Associate Professor and writer Christos Yannaras with the Offikion of Archon Grand Rhetor, after the completion of Vespers, which he celebrated in the afternoon of Saturday, August 31, the eve of the celebration of the Indiction, at the Life-Giving Spring at Valoukli, in the presence of a multitude of Hierarchs, Archbishops, the Consul General of Ukraine in Istanbul, Alexandr Gaman, and faithful people.

“The Holy Great Church of Christ today bestows on you in this historic Holy Patriarchal and Stavropegial Monastery of the Life-Giving Spring, the venerable dwelling of the All-Holy Mother of Valoukli, through the hands of our mediocrity, the Offikion of Archon Grand Rhetor,” said His All-Holiness, and he added: “In a worshipful and celebratory atmosphere, which, as you write, ‘humanizes the people’ (Modern Greek Identity, p. 217), we admit and welcome the new Archon Grand Rhetor Christos Yannaras into the choir of the Officers of the Church of Constantinople.”

“We honor, we praise, your great contribution to theology, philosophy, education and culture. We admire your rich writing production, which includes about a dozen great books. Recognizing your enduring and thriving public testimony of ‘our hope,’ the graceful speech of the charismatic speaker and debater who touched and grasped the chords of the soul and intellect of innumerable people, young people, old and young, and, in effect, contributed to the dissemination of the spiritual treasures of our Orthodox tradition, assisted the faithful in encountering the modern world, critically evaluating its culture and appreciating its positive outlook. Your work is a valuable spiritual asset also for the generations to come." 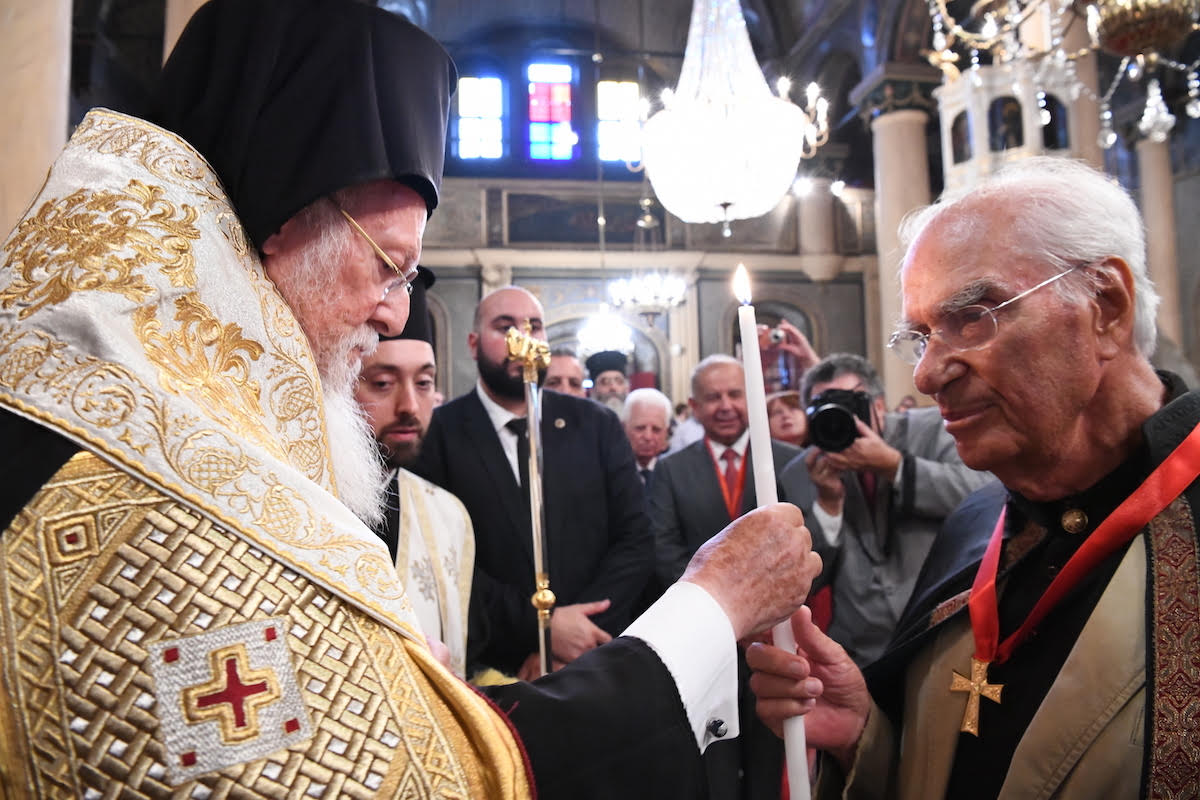 His All-Holiness then referred extensively to the author’s work and emphasized:

“To your honor, beloved Archon, theology, in its original expression, is always the theology of freedom. Freedom is a relationship, it is the transcendence of the ‘sealed ego,’ the attachment to which is the great ‘sickness unto death without the hope of the Resurrection,’ as you write (The Freedom of Morality, 1970, p. 211). ‘Real life is identified with social existence, the freedom of love. Real authenticity, the true way of existence, is free, loving self-expression and self-sacrifice...What is love and freedom from the necessities of physical individuality is life.’ (By Themselves, pp. 98-99). You are the expressor and defender of Truth as ‘society,’ ‘the culture of relationship’ (The Privilege of Despair, p. 117), ‘the culture of the individual.’

“You have succeeded in formulating, in fascinating modern language and in dialogue with philosophy and science, without minimalism on either side, the truth of the ecclesiastical experience as it lived in the tradition of Orthodoxy, as a sharing in the ‘innovation’ of life, which is not aware of deterioration and death.

“It is characteristic that you find in ecclesiastical worship the quintessence of Orthodox witness and the driving force of an active role of Orthodoxy in the modern world. ‘Only proper worship, nothing else, would bring about a cultural explosion...The leading poetic forms of the language that ‘all the generations’ of Greeks resort to and work with. Architecture, painting, decoration, dramaturgy, a struggle of centuries of philosophy and creative inspiration into an offer of life – an offer of life for every person, anywhere on earth’ (Greece In General, pp. 30-31).

“By rigor and on the basis of theological criteria you are practicing the spiritualization of the ecclesiastical event. Indeed, when the Divine Liturgy ceases to be ‘the offering and reference of all the elements of the cosmic flesh of our life’ to God, and it becomes ‘a religious ceremony that concerns feelings and not our lives’ (op. cit., p. 101), then the Eucharistic essence and identity of the Church is altered. You rightly emphasize that ‘the authenticity or alienation of the ecclesiastical event is judged to be the salvation or loss of the parish’ (By Themselves, p. 94).

“In your writings, you have highlighted the central importance of practicing the ‘exercise of ascetic self-sacrifice’ in ecclesiastical life, the voluntary submission of the believer to the ‘universal experience and life of the Church’ (The Freedom of Morality, 2nd ed. 1989, p. 141). You write: ‘Asceticism for the Orthodox does not mean an individual exercise of the will, as in Western Puritanism, nor an idealistic idealization of deprivation, but asceticism is an ecclesiastical event, a social one, a transformation of the individual use of material goods into social use, functional use’(Critical Interventions, pp. 18-19).

“Christian asceticism is ‘thankful,’ it is ‘the attempt to return to the proper use of the world, to a personal relationship with the world’ (The Freedom of Morality, p. 206). As you rightly point out, ‘the more personal a person becomes in relation to the world, the more the personal reason of the world is revealed to him.’ Nature is manifested ‘as the personal Energy of God, the wisdom and glory of God.’ (The Privilege of Despair, pp. 14-15). Here is the reason for the Ecumenical Patriarchate to deal with the ecological problem and to address the catastrophic natural consequences of individualism, hedonism, modern economics, and technocracy. Concern for the environment is a consequence and extension of ecclesiology and Orthodox cosmology. Freedom in Christ and in regard to creation is a relationship, not a possession.

“We appreciate, in particular, your views on the meaning of the universality of the Patriarchate of Constantinople over time, which were also welcomed by our spiritual father Metropolitan Meliton of Chalcedon, who had great esteem for your work. You characterized ethnophyletism as ‘the terrifying alienation of the conscience of the universality of the Church’ and praised the fact that ‘Constantinople never favored the nationalistic sealing-off of Hellenism and represented to the end the path of spiritual and cultural universality’ (The Privilege of Despair, pp. 226-227).

In another part of his speech, His All-Holiness said that he himself has studied the writings of the Honorable Professor and Archon Offikion of the Ecumenical Throne.

“You are the theologian and philosopher of the person and of freedom. You have historically and systematically demonstrated the identity and truth of our own tradition against Western individualism and the alienating religiosity of ecclesiastical life. You emphasize the unity of our ecclesiastical tradition, the ‘truly fascinating phenomenon’ that, ‘despite the diversity of historical contexts and/or philosophical language, the ontological ‘compositions’” -- of the Cappadocian Fathers, of Maximos the Confessor, of Gregory Palamas – that constitute a commentary on the first written versions of the ecclesiastical experience, a commentary on the Scriptures, and on that ineffable Biblical phrase ‘God is love’ (1 John 4:16), is ‘a summary and focus of the ontological problem of the Greek Fathers’ (By Themselves, pp. 109-110). All of your work confirms Jacques Lacarrière’s eloquent observation that Orthodoxy is ‘our home’ for our people, and we at the Phanar are guarding this holy house, the land and the way of life of the suffering Greeks, the ‘past’ and the insuperable, the “great ones” always present in another form ‘telling them not to weep,’ as said our late predecessor, the Ecumenical Patriarch Athenagoras. The night watchmen and guards, unmistakably, remained unmoved in the Kingdom, where the Holy Great Church of Christ is commanded to live for centuries, relating to the Author, Chief and Finisher of our faith.”

In his response, the new Archon thanked the Ecumenical Patriarch for the great honor he had received. “The Offikion of the ‘Archon’ of the Ecumenical Patriarchate,” noted Mr. Yannaras, “has, at least in my eyes, the seal of the particularity of the ‘first-class’ institution in the episcopal system of the Church: it does not proclaim partners, honorable members, select leaders in the patriarchal order. No. It grants the recognition of ‘Archons.’ ‘I have it, I’m giving you this.’”

“The Ecumenical Patriarchate is the ‘ever-deferred and never-spent’ highest class of ecclesiastical Hellenism. Where does the ‘precious gibberish’ of the class of Archon come from? He was appointed by the head and guide of the Church: ‘The last shall be first, and the first last…Who is greater, the master or the servant? Not the master? I am among you as a servant.’

“I am grateful for the honor, love and trust that the Ecumenical Patriarch has conferred upon me today, in accord with the traditions of the Phanar. The particularity of gratitude derives from the particularity of the historical moment. Especially today, the Ecumenical Patriarchate is called by God to live in the greatness of humiliation, afflicted, sad, ill-treated, not by opponents and adversaries, but by the ‘round table of its offspring.’

“We are living with the temptation that the ‘offspring’ of the first-throned ecclesiastical paternity might slip into the baseness of the religious fervor of nationalism.

“The Ecumenical Patriarchate, once again, lifts up the cross of the preconceptions and threats of the insolent brow of the numerically mighty, asserting the nobility of its duties.

Afterward, a reception was held in the courtyard of the monastery, under the auspices of His Eminence Metropolitan Gennadios of Sassima, during which the Philharmonic Orchestra of the Municipality of Amfilochia presented a program of traditional and modern songs.