Print "Let the Little Children Come to Me": Children as Teachers in the New Testament
Dr. Bruce N. Beck

This article is from PRAXIS Volume 16, Issue 3: "Sacred Childhood"

“But Jesus said, ‘Let the little children come to Me, and do not forbid them; for of such is the kingdom of heaven.’” – Matthew 19:14

In all three synoptic Gospels there is a difficult story in which the disciples keep the children from approaching Jesus to get a blessing from Him. What reason would the disciples have had for such an action? Was Jesus being crowded, and they were providing protection for Him? Was He busy or occupied with important matters and could not be disturbed by a group of kids? Perhaps so. It would be like a group of children running to greet our Archbishop Demetrios as he speaks in a parish hall.

Just before the children come, Jesus is speaking with a group of Pharisees who have come to test Him about whether or not it is lawful for a man to divorce his wife. As the disciples are blocking the children’s approach to Jesus, He is concluding His talk with the Pharisees, saying that God’s original purpose for marriage was for a man to leave behind his mother and father and cleave to his wife. The two would become one, such that “what God has joined together, let not man separate … He who is able to accept it, let him accept it” (Matthew 19:6, 12).

This last sentence spoken by Jesus as the disciples hold the children back says more in the Greek than in the English translation. The verb used here is χωρέω (choreo); translated as “accept,” it literally means “to make room” for the teaching. Jesus is saying, let the one who can make space for this new idea do so; let him change his understanding. The disciples are asked to make room for this new teaching, to expand their minds for a challenging concept. When they restrict the children’s access, Jesus again asks them to make room for the children and to not hinder them from entering into this space that the disciples thought was reserved only for teaching. Indeed, it was reserved for teaching, since the disciples were about to receive a lesson based on the actions of these children.

I remember an experience my wife and I had when our oldest daughter was about three years old. After getting our daughter settled for bed, we were finally having a quiet dinner together—or so we thought. Then came the sound of little feet on the stairs, and our pajama-clad daughter appeared in the doorway. “I want to be invited,” she said. Of course, we allowed her to come and sit on our laps, eat our food and be included in everything. That is just the way it is with children—they do not see any barriers to gaining access to those they love.

The children interrupt Jesus’s discourse on marriage, but this disturbance allows Jesus to say something amazing about what it means to be part of the kingdom of God. Here the children become our model; they themselves show us something about the kingdom, in as much as they have such exuberance to approach and be close to the Lord whom they love. Generally, children are too young to know whether their father or mother is in the middle of an important public speech. If allowed, they would come right over to their mom or dad and ask to be picked up. Children have no sense of impropriety. I think Jesus offers the children as our example to imitate their uninhibited desire to receive His blessing by drawing near to Him with faith and love, casting aside every barrier, obstacle and excuse.

In addition to the children’s boldness being a model for us, the disturbance they caused that day itself provides an important lesson. These so-called disturbances or distractions can be important opportunities for us to make room with our attention and time rather than blocking things out. So much of life takes place outside of our plans. The story of the Good Samaritan (Luke 10:25–37) demonstrates this well, since the Samaritan is on his way to Jerusalem and alters his plans to draw near to the half-dead Jew lying on the side of the road. He does not have time for this, nor is it his social obligation to help a Jew. Rather, he puts his plans on the altar as a pleasing sacrifice to God, emptying himself of his thoughts by leaning down over the dying man to see if he was alive or dead. The Samaritan then brings him to life by offering him everything he has—the oil, the wine, the bandages, his donkey and his money are all offered to ensure that the man lives. In the story of the Good Samaritan, this action of coming down close to our neighbor to check on him or her is called compassion.

Returning to the story of the children coming to Jesus, while the disciples are trying to protect Jesus, He instead says to them “let it be”: accept this new event and do not try to deny it or pass by as if it did not happen. Jesus accepts the throng of children as an unplanned moment to minister to them and teach a lesson to those attending. As parents, we never know when our child will need us. But when they do, we know instinctively that it is not a disturbance but our identity as love-compelled parents to run to them, as the father does when he sees the Prodigal Son returning home (Luke 15:20). This we know as parents. It is our privilege to love, no matter what the cost to our plans. In this passage, Jesus teaches that the children provide just such a lesson about the kingdom of God: the way of the Spirit-led life is one in which disturbances and challenges are not departures from or exceptions to our plans; instead, as Jesus says, we are to make room for them within our expectations, opening space as He does for the children, so that these exceptions become accepted with thanksgiving (Philippians 4:6). As we enter into those difficult spaces in order to help others, we also join them in crying out to God for help, knowing that nothing can hinder us from His presence. “For I am persuaded,” St. Paul writes, “that neither death nor life, nor angels nor principalities nor powers, nor things present nor things to come, nor height nor depth, nor any other created thing, shall be able to separate us from the love of God in Christ Jesus our Lord” (Romans 8:38-39).

Jesus asking His disciples to release the children offers us instruction on two integral aspects of the Orthodox Christian life—the desire to be in the presence of Christ and receive His blessing and the radical acceptance of the people and situations that God puts in our path or brings to our memory, people for whom we may help clear a path to the Lord, our true freedom from what binds us. Jesus asks the disciples to do for the children what John the Baptist did for Him in the desert, to “prepare the way of the Lord; make His paths straight ” (Mark 1:3), to open a path in the crowd so the children can be blessed by Him. While at first the children are rebuked by the disciples, they become the chief object of Jesus’s attention. “The stone the builders rejected, the same became the head of the corner” (Psalm 117:22). While the children were separated from the beloved Christ, Jesus was saying to the crowd: what God has joined together, let no person break or keep apart. Love could not bear the children being separated from Jesus, so it cleared the way for them to cleave to Him. The disciples, while well intentioned, were getting in the way rather than facilitating Jesus’s ministry of calling the children of God to follow Him. Like the four friends who placed the paralytic in front of Jesus by digging a hole in the roof and lowering him down, since “there was no longer room to receive them” (Mark 2:2), Jesus removes the obstacles in the way of the children who want to see Him, telling His disciples, “get out of the way, do not block, let them come to me.” 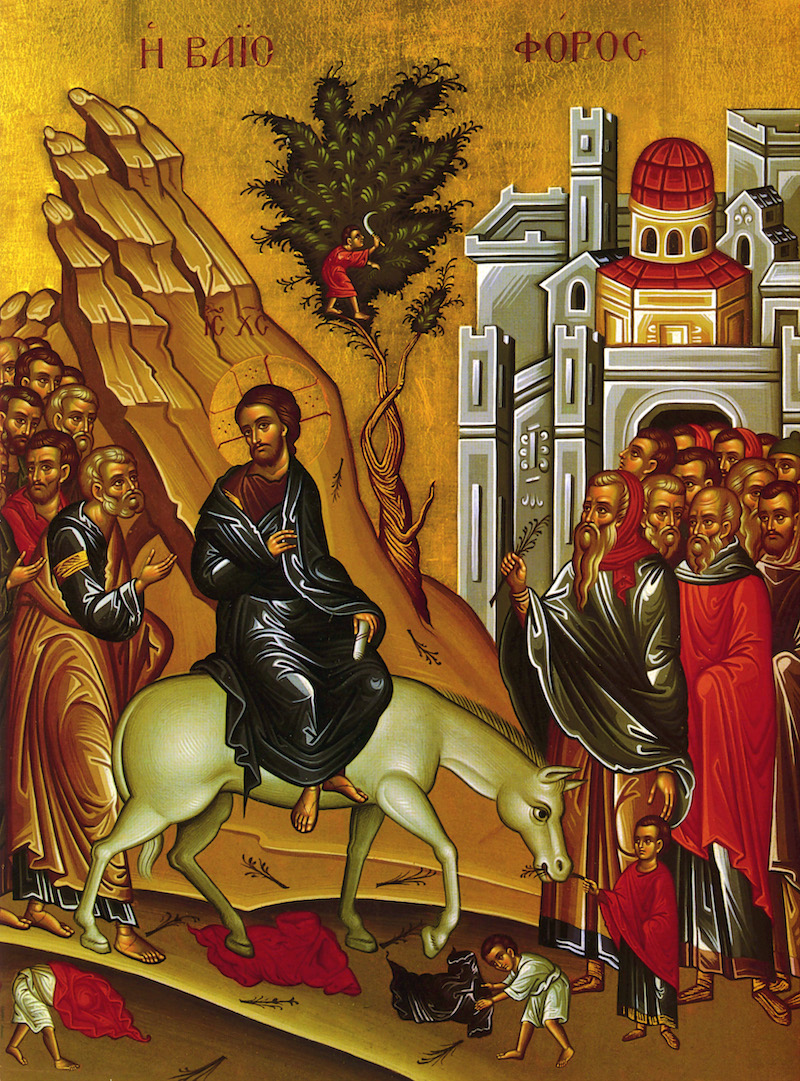 As St. Romanos writes, “Mourn, O Jerusalem, since you have found children, your sons, the teachers of their fathers” (Kontakion On the Entry into Jerusalem, strophe 13). Here too in this story, the roles are reversed: the children become our teachers in the Orthodox Faith, and we the parents and leaders of the Church become the children needing instruction. Their desire to see Jesus and receive His blessing is their all-consuming, overriding passion, and they do not seek solace from excuses. Like the children depicted in the icon of Palm Sunday who lay down cut palms and their garments before Christ entering the gate of Jerusalem, the children in this story also recognize Him as the one who could satisfy the longing in their soul.

So why did the disciples not make room for the children? This was a teaching moment for them. They thought they were serving their master by keeping order, but their minds were opened to the truth that they should never obstruct those seeking their Lord. In our ministry, we are asked to make straight the ways in the desert, to make room for those who come to Christ to receive His blessing or receive their sight. We are like those providing hospitality, preparing a space and making room for God to give the blessing through our loving hands as His servants. Let us then fervently with love clear a path to our God for both ourselves and others who desperately need His touch.

Dr. Bruce N. Beck is Assistant Professor of New Testament at Holy Cross Greek Orthodox School of Theology and Director of the Religious Studies program at Hellenic College. Since 2003, he has served as Director of the Pappas Patristic Institute at HCHC. Dr. Beck received both his MDiv and ThD from Harvard Divinity School, where his area of specialization was New Testament and early Christianity and the history of the interpretation of Scripture.